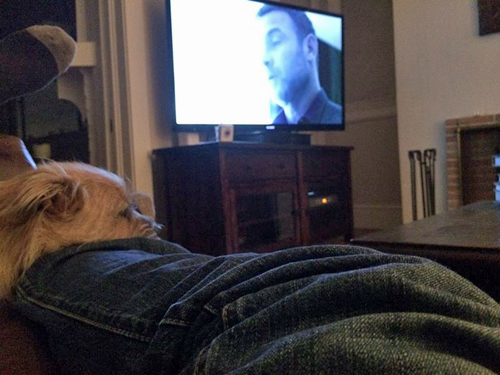 So I sat down last night with The Biped to watch the idiot box and pass the time.

As a rule, I don’t care what we watch; I just like the wah The Biped to watch the idiot box and pass the time.y the cool leather sofa feels on my furry gut, and the pillow-like quality of soft denim underneath my chin. The Biped however, can be particular. Oftentimes, he’ll change the channel right in the middle of a program. I can usually tell when this is going to happen, because the change is almost always preceded by a series of sighs and mutterings and other subtle harbingers of dissatisfaction I’ve come to associate with human disgust and exasperation.

Last night was a case in point. The Biped grabbed one of those cold, brown bottles filled with delicious smelling suds, cracked it open, and stretched out with great anticipation. I assumed my usual position. The channel he chose featured ten nervous looking humans standing in a straight line, all wearing odd strands of colored silk around their necks. It was a most unusual assortment.

The one in the middle was impossible to miss. He had fantastic fur, like a Golden Retriever, and was clearly the top dog. The one to his left was panting and slobbery, like a sleepy Boxer, and the one on his right looked like a curious mutt with a touch of mange. I liked him though. He was scrappy.

There was also an angry poodle up there, along with a yippy little chihuahua and all the way on the end, a Bernese Mountain Dog that looked just like the one at the Dog Park who likes to sit on my head. They even had a Black Lab! He didn’t get to talk much, but when he did, I thought he made more sense than the whole pack put together.

Anyway, I don’t know how it ended, because when the Pit Bulls in front started demanding answers to question I didn’t understand, The Biped started clucking and sighing at the other end of the couch. Then the cursing started.

Again – I don’t mind, I’ve heard it all before. But just as I was starting to form the beginnings of an informed opinion, The Biped switched the channel, and just like that, we were watching something called “Ray Donavan.”

Who, now that I think about it, looks an awful lot like a Doberman Pincer. From Ireland.