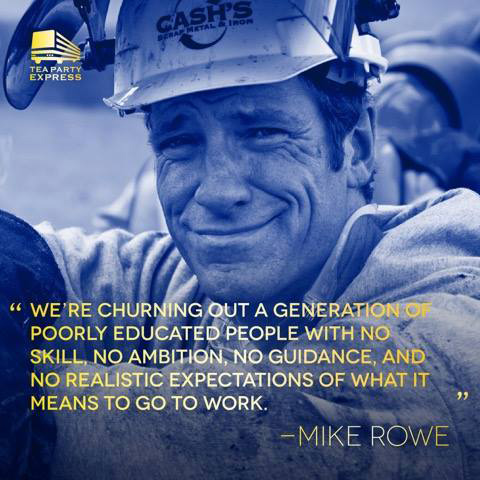 Carrie Simmons writes,
“Did you know the “Tea Party Express” was using your image and words (out of context) to “advertise?”

Yes, I’m aware of the image, and no – it was not created with my knowledge or permission. Last I checked though, it’s been shared over 160,000 times, and seen by over 20 million people. Since my posts are intended to encourage conversation, this is a good thing. On the downside, many of those who oppose The Tea Party are no longer willing to talk to me. And that’s too bad.

Frances Jacobs writes, “I suggest you hop aboard the Tea Party Express and ride it straight to hell.”

My own mother, more curious than judgmental, just saw the image, and called to ask why there was a “choo-choo train next to my face.”

“I don’t know, Mom. I guess maybe The Tea Party agrees with what I wrote?”

“Oh well,” she said. “At least they spelled your name right!”

For the record, I am not now, nor have I ever been a member of The Tea Party. And the irony of this situation is precisely why I’m not much of a joiner. My original post was an honest attempt to illustrate how a simple virtue like “work ethic” can no longer be discussed without becoming instantly politicized. Of the 20,000 comments that followed, nearly all were positive and thoughtful. But now that my thoughts have been reduced to a single sentence and associated with a group that half the country views with deep suspicion, my words are a touch more…inflammatory?

Diane Sipple says, “Who are Mike Rowe and The Tea Party to tell us our kids a lazy? My kids are hardworking and respectful!”

Jason Givens declares, “Mike – Please stop judging the work force like you are in it. Working a half a day with someone and calling it work is show biz. Want to impress the work force? Come work in our foundry for 6 months with no cameras.”

Let me be clear – I stand by everything I said in my original post. The lack of work ethic in America is a serious problem, and it’s getting worse everyday. But obviously, that doesn’t mean every parent is a failure, or every teacher is a hack. Nor does it mean every kid is slacker, or every person out of work is lazy. However, there’s no getting around the fact that we – the collective we – are no longer instilling the belief that mastering a skill and working hard can lead to a prosperous life. Consequently, millions of able-bodied people have concluded the system is rigged, and stopped looking for work. This is, in my opinion, is the greatest threat our country faces.

Let me riff on the Tea Party quote for a second. Many are asking me to explain exactly how we are we “churning out” the people in question. Personally, I think it started when we began pushing a four-year degree at the expense of every other form of learning. Back when we started describing education as “higher,” vs. “alternative.” Back when we started embracing goofy platitudes like “Work Smart, Not Hard.” Traditional portrayals of hard work have been slowly devolving into stereotypes ever since. On TV, plumbers were 300 pounds with giant butt-cracks. Every other skilled worker looked like Schneider from One Day at a Time. Books like “The 4-Hour Work Week” became instant best-sellers, American Idol became the #1 show in the country, and Madison Avenue found endless way to remind us that true contentment required less work and more vacation. Hard work, delayed gratification, and many other virtues once acknowledged as keys to success were gradually repositioned as impediments to happiness.

Over time, people got the message. Enthusiasm for the skilled trades began to wane. Vocational education vanished from high school. The definition of a “good job” began to change, and before long, everyone was getting a trophy, or expecting one. Meanwhile, demand kept increasing for four-year schools, so universities were able to raise tuition at rates that far exceeded inflation. Vast amounts of money were then made available, and students borrowed it like never before.

Today, the results are self-evident. One point two trillion dollars of student loans hang like a millstone from the necks of college graduates. Many are now perfectly educated for jobs that don’t exist, and untrained for those that do. Thus, the people we’re “churning out,” have been told to expect something that isn’t there, and trained to see genuine opportunities as vocational consolation prizes. Now, there’s an added obstacle that many employers talk about with real concern – a profound resistance to moving to where the jobs are. Not just a resistance – but a kind of indignation at the mere suggestion. Many people now believe a “good job” is a job that exists in one’s current zip code. This to me, is the most jarring thing. A nation once defined by a pioneer spirit and a willingness to keep moving, now seems stuck in one place.

I know it’s hard to relocate. In some cases, I know it’s nearly impossible. I also know it’s easy for a guy in my position to sound judgmental and out of touch with the problems so many face. But every statistic confirms my point. People are resistant to change. We don’t want to retrain, retool, and relocate. We want a job that meets our expectations. A job that we like. A job that’s convenient. A job that pays what we think we deserve. These expectations are both limiting and unrealistic. But we – the collective we – have allowed them to persist. We reward the precise behavior we should be discouraging. My foundation does not.

Last month, I heard from a 24-year old guy who went through a welding program on one of our scholarships. He lives in Kansas with his wife and young son, but he commutes to North Dakota for a few months at a time, and comes home when he can for brief visits. It’s not easy, but it’s opened up a world of possibilities. He just paid off his home. He’s debt free, making six-figures, and saving a small fortune. In short, he’s becoming indispensable, and giving his family options they’d never have if he had waited for the jobs to come to him. That guy’s heroic, in my opinion. He’s also a threat to anyone who says The American Dream is dead.

Here’s an even better one. Last week in San Diego, I hopped in one of those Pedicabs, and let some guy peddle me around the waterfront. The guys name was Ali, and he came to this country ten years ago with nothing. In fact, he didn’t even speak the language. Today, he owns 90 Pedicabs, employs 60 people, and speaks English better than a lot of people who were born here. We spent the day together, and next season, you’ll see his story on Somebody’s Gotta Do It. To me, it’s an inspiration, and proof-positive that anyone can make it in this country who’s willing to learn a skill, provide a service, and work really, really hard.

Truth is Carrie, I’m not as bearish as The Tea Party makes me sound, but I’ll stand by the quote, even out of context and festooned with a logo I didn’t request or approve. Frankly, I’m glad the Tea Party chose to share my words, and wouldn’t object if The Socialist Party follows their lead. In fact, I’ll officially invite them to do so right now, along with The ACLU, The NAACP, The AFL-CIO, The NEA, The EPA, The NRA, The FBI, Jews for Jesus, The SPCA, Greenpeace, OSHA, The USMC, The local PTA, and my old pals at PETA. The more the merrier! Because ultimately, the enthusiastic support of a national work ethic is something ALL groups should get behind, even if I can’t get behind all groups.* Some things are simply too important to be co-opted. Work ethic is one of them.

*Offer not valid to NAMBLA, The KKK, ISIS, Hamas, or The American Nazi Party. Because every rule has exceptions…