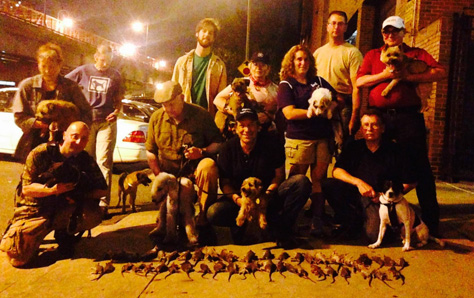 Mike
I saw this photo online yesterday, and frankly, I’m disappointed. I would have never imagined you’d participate in something as inhumane as “rat hunt,” much less expose your dog to the dangers of running through New York City, terrorizing innocent creatures. Not what I expected from an animal lover.
Brenda Conway

Trust me, I’m as surprised as you, twice as disappointed, and much more confused. First of all, I haven’t seen the Biped in over a week. Secondly, that’s not me in the photo. Thirdly, if those are indeed rats, they look frickin’ delicious, and I want one!!!

Until now, I never dared imagine these “rat-things” walked the earth. I figured they were just a fantasy – a mythical creature that lived only in the part of my brain that conjures up the smorgasbord of delicious furry things that can only be chased down and brought to heel in my nocturnal wanderings. But now, as I examine more carefully the photo you kindly attached, I can plainly see the objects of my affection are not fantastical at all – but real! And as I struggle to get my head around this tantalizing prospect, I behold my doppelganger, right there in my Bipeds clutches, dangling above the delicious vermin that haunt my dreams, like a 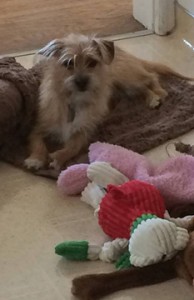 splinter in my mind.

What exactly is happening here? Am I in some parallel universe? Indeed, as I examine the other guests, I see four identical versions of me, each wearing a look of undeniable satisfaction. Am I to assume from your note – which I will most assuredly pass on to His Eminence – that these identical versions of me spent the evening dashing about the streets of a distant town, long after dark, chasing the creatures I now know I was born to dispatch? Because if that’s a “rat hunt,” it sounds a hell of a lot better than lying around with a bunch of stuffed animals that don’t run or squeal or bleed when I bite ’em.

Anyway, I don’t know when the Biped’s coming back. But I have questions. Many, many questions.
Freddy

PS. Regarding the Biped’s love of animals, I’ll confess he does seem fond of me, when he’s here. But from what I’ve seen him do to a steak, I don’t think I can compete with cows.