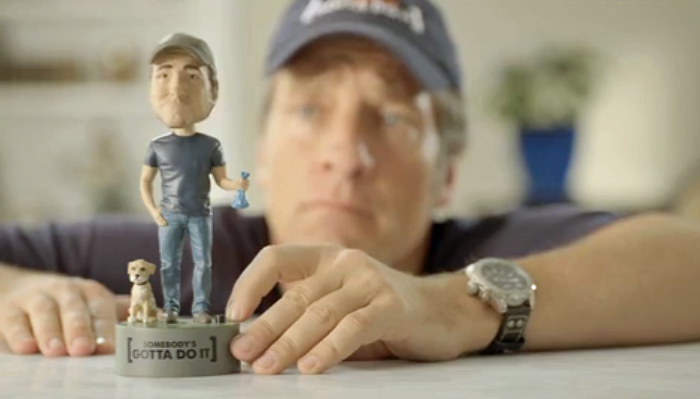 As you may have heard, my odyssey to mass-produce a high-quality, competitively-priced Bobblehead entirely in the USA is now complete, and the results are coming to a future episode of Somebody’s Gotta Do It. Without giving too much away, I can tell you that much of what I suspected was confirmed. We succeeded on the “high-quality part,” but fell short on “competitively-priced” and “mass-produced” part. The reasons for this are complicated, and best explained by actual economist. But the bottom line is this: it is simply impossible in today’s global market to mass-produce a high-quality, American-made Bobblehead, at a competitive price.

In the course of exploring all the options, I met a man named Warren Royal who controls a decent chunk of the global Bobblehead business. Warren showed me firsthand why my request was impossible to fulfill, in a way that even I could understand. But he also agreed to produce a very limited run of high-quality, American-made Bobbleheads from his facility in Georgia, as a fundraiser for my Foundation. Warren is shipping these American-made Bobbleheads to me as they’re completed, and I’m auctioning them off individually to the highest bidder over the next year. One hundred percent of the money goes to mikeroweWORKS, and helps subsidize our Work Ethic Scholarship Program. We’ve auctioned off three so far, and raised a rather incredible $18,000. Tonight, I’m pleased to offer, to the highest bidder, Bobblehead #4! Bidding starts at $250.00.

These are the very Bobbleheads seen in the promos for Somebody’s Gotta Do It. Each one is signed and individually numbered. Each one includes a hand-painted version of Freddy, and me, holding a bag of his crap. (Metaphors abound.) Additionally, Warren was kind enough to shove a chip up my butt, (a microchip?) enabling me to utter a few dozen expressions previously heard on past shows. The attached video demonstrates a few.

The auction will run for three days. As always, bid high and irresponsibly – it’s for a good cause, and totally tax-deductible.

PS. Our Work Ethic Scholarship is currently accepting applicants. We’ve got $400,000 to give away, so chop-chop! More info here.

PPS. Many of you have expressed an interest in a more affordable version of my Bobblehead, and I promise, that’s in the works. Please be patient, and remember that this is a fundraiser. I’ll have a similar version available sometime soon. They won’t be signed, and they won’t be made here, but they’ll be sanely priced. I promise.