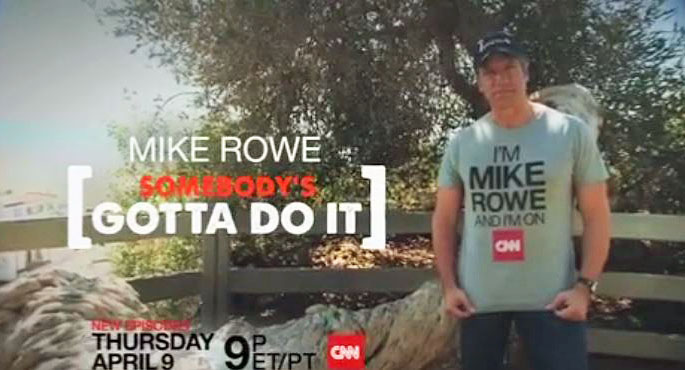 Hi Julie. I’ll have to assume you’re correct. To my knowledge, they are four, and I think I have them all. I might auction them off for the foundation sometime soon, though it’s hard to imagine a more confusing message on the chest of a person who is not Mike Rowe, and not on CNN. But you never know. People will wear anything.

The shirt does have an interesting backstory though. I was asked to wear it in a series of promos for the coming season, and the reason was kind of fascinating. Here’s the short version.

Last year, I climbed on top of the giant CNN logo down in Atlanta to announce the launch of Somebody’s Gotta Do It and tell the country I was now on CNN – literally. In the history of promos, nothing at CNN has ever tested as well. After watching, people were almost universally amused. A remarkably high percentage said they liked the idea of a light-hearted show on a serious news channel, and an even higher percentage said they’d watch. However, 27% of those questioned immediately after watching the promo were unable to recall the channel on which my show would air. In other words, after watching me scale a giant red letter and sit atop a massive 12 foot logo for 30 seconds while saying the words, “Yep, I’m on CNN,” over a quarter of those surveyed were unable to conclude that Somebody’s Gotta Do It was in fact, on CNN.

A cynic might look at these numbers and conclude something unflattering about the species, but a marketing expert will simply try again, and hope the message sinks in. Hence the shirt, and the attached promo.

PS Somebody’s Gotta Do It airs next Thursday at 9. On….