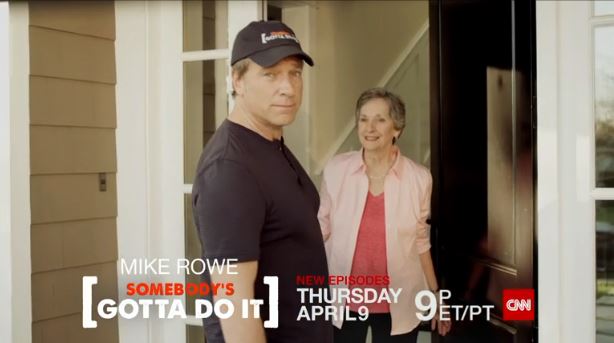 …According to New Promos

CNN Original Series “Somebody’s Gotta Do It” with Mike Rowe returns for a second season on Thursday, April 9. A new series of promos make fun of the fact that Rowe’s show isn’t actually news… although CNN is obviously a news channel.

Rowe’s actual parents appear in the first promo, with his mom saying, “I still can’t believe your show is on CNN.” Rowe responds with, “I know, mom. It’s a lighthearted show on a serious network, and yet… there I am.”

Rowe’s mother goes on to say, “It’s strange because people tune in to watch the news, and there you are on a trapeze.” Rowe’s father ends up stealing the scene with when he chimes in from the couch. The other promo features Rowe going door-to-door, reminding people that his show is actually on CNN. Because, “nobody seems to know it’s on CNN.”

Check out both hysterical promos below: