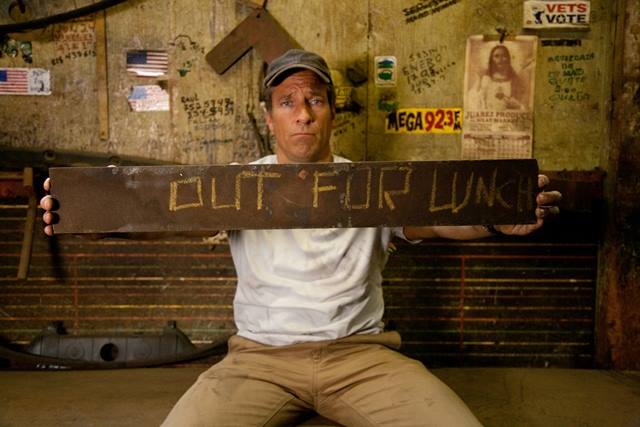 Here’s a charming love letter from an aspiring journalist at Salon called Mario Vasquez. It’s one of the most extraordinary articles I’ve ever read.

Wal-Mart on Black Friday might be one of the dirtiest jobs going. Mike Rowe doesn’t seem to want to talk about it

MV: Earlier this month, television personality Mike Rowe stopped by Reddit to promote his new CNN program “Somebody’s Gotta Do It.” The visit took place on the site’s Ask Me Anything section, an increasingly frequent destination for celebrities looking to spread the word on upcoming projects. The majority of questions asked by Reddit users centered around the peculiarities of Rowe’s time on Discovery Channel’s “Dirty Jobs,” a show that has made him a blue-collar icon for millions of viewers. His answers happened to be quite charming and carried the matter-of-fact manner that one would expect from Mike Rowe after watching him humbly trudge through plenty of genuinely “dirty” jobs. The most revealing part of the session, however, was a question he did not answer, thereby shedding some light on Rowe’s attitudes and his immediate impact on the mainstream perceptions of American workers.

MR: Hi Mario. Mike Rowe here. How’s it going? While I appreciate you spelling my name right and mentioning my new show, (Wednesdays at 9!) I’m afraid there’s a problem with your fundamental premise. It didn’t happen. I answered every single question I was asked over the course of an hour.

MV: Out of dozens of top-ranked questions, the query ignored by Rowe was one from an admitted Wal-Mart employee wondering whether Rowe would be open to spending a Black Friday at the nation’s largest private employer. The user described the craze that is fostered on this day and painted the experience as one deserving of the “dirty” label that Rowe likes to use to describe other professions.

MR: You’re right. That would have been an excellent question to respond to. Again, I’m sorry I didn’t know about it. My AMA was conducted over the telephone. A very nice woman from Reddit named Victoria read me dozens of questions and turned my verbal replies into a written response. I answered as many as I could. Unfortunately, there were about 4000 we couldn’t get to. Historically though, I’ve written about ten thousand words on the subject of Walmart. If you’re genuinely interested, there facts are here.

MV: Why would this question be ignored by a man who is known for constantly extolling the importance of respect for the working class and destigmatization of the jobs that they do?

MR: It wasn’t ignored, Mario. The questions were coming in at the rate of 75 a minute. I answered as many as I could over the course of an hour. I’m sure Reddit would have explained this to you, had you asked. They’re very friendly and easy to find. As am I.

MV: The answer is quite plain if attention is paid to Rowe’s involvement with corporate power, specifically Wal-Mart. Mike Rowe has been a Wal-Mart spokesman since earlier this year when he began narrating television advertisements for the global powerhouse attempting to showcase its efforts to expand its selection of domestically made goods.

MR: Actually Mario, I have no deal with Walmart, and for the record, I have never been their spokesman. Walmart produces thousands of different commercials every year. I narrated one of them 11 months ago. I was not identified in the spot by name. I was not featured on camera, and I was not compensated to defend the company during the fallout.

I agreed to narrate that commercial because I’m supportive of any attempt to bolster US manufacturing. I’d have done the same for Target, Costco, or Home Depot. I want to see this effort succeed, even it’s being lead by a company that’s far from perfect. Don’t you?

MV: This “bluewashing” (spending company revenue for blue-collar-friendly P.R. while ignoring the harsh realities on the ground) has brought Rowe plenty of criticism, but apparently little in the way of concession and acknowledgment of the many negative factors at play for not only Wal-Mart workers but the retail sector as a whole (the fastest-growing sector since the recession hit — a counterproductive measure to Rowe’s stated goal of helping out skilled workers).

MR: It’s true that I was criticized for narrating that commercial. Along with a modest pile of hate mail and a few charming death threats, I received over 12,000 form letters from a labor organization called Jobs With Justice. Like you, they were disappointed to learn that my foundation doesn’t take sides in labor disputes. They wanted me to meet with unhappy Walmart workers, and take up their cause. I explained that mikeroweWORKS provides opportunities for workers who would like to learn a skill that’s actually in demand, and offered to connect their members with a variety of jobs that required the mastery of a skilled trade. That offer still stands.

MV: Rowe’s lack of answer regarding the possibility of working Wal-Mart on Black Friday is a clear aversion to the good that would come of devoting airtime to the immediate underbelly of American consumerism and the downright “dirty” plight faced by millions daily.

MR: My “lack of answer” was indicative of not being asked the question in the first place. Nothing more.

MV: If Nov. 13’s historic Wal-Mart sitdown strikes are any indication, it is that the employees of Wal-Mart need even more solidarity from the public at large, and not celebrities looking to latch their name to a kumbaya moment.

MR: I get that you don’t like Walmart. I get that you don’t like me. But if you can, try and put your own agenda aside for a minute and look at the big picture. Walmart has promised to invest $250 billion dollars in US manufacturing over the next decade. Do you really think America has any hope of bringing manufacturing back to this country without the support of the largest retailer on the planet? Are you really against this?

MV: Rowe’s Reddit dodge and his consequent contradictions are further illuminated when taking into account his recent back and forth with David Simon, creator of HBO’s “The Wire,” the critically lauded program about the war on drugs in the the city of Baltimore. Rowe’s charges essentially amount to complaint regarding the characters depicted in the program — essentially drug dealers and pimps, in his eyes — and the related connotations that Baltimore, his hometown, now carry in popular culture. Rowe stresses that the show does not depict the Baltimore he knew growing up. Simon highlights the contradictions that led Rowe to the point of avoiding a question like the one posed to him on Reddit.

MR: I gotta admit Mario, when you make up a premise, you really stick to it. This is the seventh time you’ve accused me of deliberately avoiding a question I never knew existed. You’ve based your entire article upon a logical fallacy. Look – if you really want to impersonate a reporter, why not do some actual digging and see if Walmart is making good on its pledge? I bet your readers would love that. Hell, I’d like to know what’s going on too. I understand that attacking the narrator of an old commercial is easier, but imagine the story you’d have if you could actually prove that Walmart wasn’t following through on its promise? Again – you’d probably need to do some actual work, but if I were you, I’d go ahead and risk the effort. What do you have to lose? If it turns out that Walmart is living up to its promise, just kill the story!

MV: His relationship with Wal-Mart has shut him off from millions of American workers — those left behind in the face of global capitalism, deepening financial inequity, and a declining welfare state.

MR: Sorry to be a pest, Mario, but again, I have no relationship with Walmart. Just because you repeat it doesn’t make it so.

MV: It is within reason to believe that Rowe does hold sympathy to those who weather the calamity of a shift on Black Friday, but there is little doubt that his complicity with Wal-Mart bluewashing is doing anything but perpetuate the social forces that limit the ability of the working class to prosper.

MV: If there is anything to learn from his lack of an answer, it is that Rowe is the one with the dirty job and he didn’t even have to sweat for it.

MR: I think the objective reader might have have learned something altogether different.

MV: Today, it would be prudent to acknowledge that he is not an icon, but a true corporate shill masquerading as champion of the working class.

MR: It might also be prudent to acknowledge that you’re the only one using expressions like “Icon,” and “Champion of the Working Class.” I don’t see myself as either, and I’ve affirmatively discouraged people from referring to me in that way. However, given your call for prudence, I’ll publicly renounce both labels right now. In fact, I’ll give you the credit for making me do it. In return, maybe you can agree to stop making shit up?

MV: Simply put, one cannot be pro-worker while standing alongside a corporate elite class and Sam Walton’s billionaire children.

PS. We’re raising money now for our next batch of Work Ethic Scholarships. If the journalism thing falls through, and you’re prepared to get your hands dirty, drop me a line. We’re very discriminating, but we don’t discriminate…