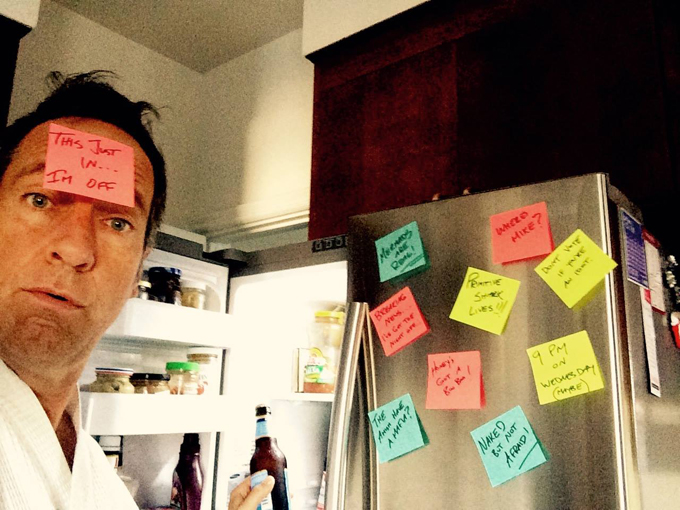 Melanie Sweazy
Hey Mike, why no SGDI this week?

So CNN is still not available on Dish, SGDI was preempted on the west coast two weeks ago, and is preempted everywhere this week. It must be very frustrating for you. I know it is for your fans.

Tristan Cooper
Good afternoon, sir. I noticed CNN doesn’t have you listed @ 9PM this coming Wednesday. Should we be concerned that they’re gonna start monkeying around with your time slot this soon? Or is it a week off?

Somebody’s Gotta Do It is indeed preempted this Wednesday. Something about an election. From what I can gather, there’s an assumption that the electorate will still be pondering the results of our political process on Wednesday night, and anxious for facts and analysis. (If that’s not the case, then our country has bigger problems than finding my show on CNN’s always-fungible program guide.)

To be clear Tristan – I’m in no way worried that anyone is “monkeying around” with my time-slot. For one thing, it’s not really my time slot. (Just ask Piers Morgan.) For another, the days of time slots in general are numbered. A huge percentage of viewers, (including me,) now watch their favorite shows on their own schedule. That number is only going to get bigger.

True – it’s a bit disconcerting to not know when your own show is going to air. But all things considered, I prefer the uncertainty of my current schedule to the “scripted reality” of alien abductions, haunted aquariums, imaginary sharks, moonshiners, mermaids, mountain-men, and naked survivalists forced to drink their own pee.

CNN is a news gathering organization that’s slowly expanding into the world of Original Non-Fiction Series. That means shows like mine are gonna get bumped by Breaking News – as they should. But remember – Breaking News accounts for less than 10% of everything that actually airs on CNN. The rest of the time is filled with something else. (Redundant News? Angry News? Yesterdays News?)

Whatever you want to call it, I’m betting that curious, good-humored fans of actual non-fiction programming just might appreciate a chance to watch something besides a room full of pundits yelling at each other, or another hour of “Dude, Where’s My Plane.” I’m betting there’s room for shows like mine and Bourdain’s and others with a point of view and a desire to deliver a truly non-scripted show. We’ll see.

In the meantime, “Wednesday at 9” is still the official home for Somebody’s Gotta Do It. But make no mistake, it’s a mobile home. Which means I might be back next week, telling you when I think my show will probably air next, based on the latest set of unforeseen circumstances.

Unless of course, you have DISH.
In which case…nevermind.

PS Last weeks behind-the-scenes footage got a lot great feedback. If you’d like, I could cobble some more video together from previous episodes and put it out there. It’s the least I can do after asking you watch my show and then hiding it. Let me know if you’re interested. I’ll gauge your sincerity by the amount of caps and explanation points.

PPS Some of you have told me your DVR lists the show as “Mike Rowe’s Somebody’s Gotta Do It.” Other listings seem to say “Somebody’s Gotta Do It With Mike Rowe,” which is hysterical and obviously my preference. I can’t explain the ambiguity, but I’ll let the network know. Thanks.