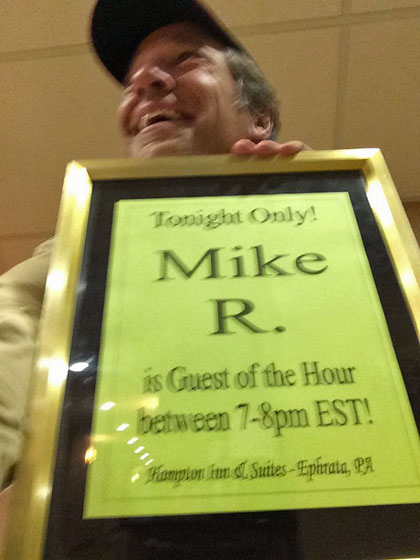 are important and beware of the “heavenly bed”

Typically, the hotels I frequent have numbers in their names. 6 and 8 are most common, though occasionally, when someone else is paying, the number Four will make an appearance.

As a rule, if the number in the name of the establishment appears as a digit, I’ll be falling asleep to the sounds of the interstate. But if the number is spelled out, I’ll have access to a mini-bar and a ten dollar Amstel Light.

I learned that words like “Express,” and “Lodge” are code for continental breakfast and free internet. “Holiday” means work, and “Suites” mean something else altogether. In general, I’m not picky, and I never complain. But over the years, I have seen some real shit holes.

I remember a _________, in Destin, Florida. It featured a leaky toilet, a cracked TV, a broken air-conditioner, and a front door that didn’t lock or close all the way. When I called the front desk to see about another room, it took a moment for me to realize why the clerk didn’t answer – there was no cord attached to the phone.

Then there was the __________ in Shawnee, Oklahoma. They promised “the best night sleep I ever had,” thanks to something called a “Heavenly Bed.” In fairness, the bed was really comfortable, in spite of the used condom unfurled in the celestial sheets. Sweet dreams…

My favorite though, was the ____________ , somewhere outside of Austin. I don’t remember the town, buy when we checked in, there were large and colorful signs in the lobby that proclaimed the advent of “Cricket Season!!!” The desk clerk confirmed the occasion with a broad smile and a cherry hello.

Her enthusiasm and the multiple exclamation points led me to assume a small-town celebration was underway in honor of the humble cricket. I envisioned an Annual Cricket Parade, complete with a Grand Marshal dressed as Jiminy, and a blushing “Cricket Queen,” waving demurely from her six-legged, paper-mache float.

In fact, there was no festival. The sign in the lobby was nothing but a warning, and the cheery hello a legal disclaimer. The town was simply and literally overrun by crickets, and the check-in form I signed without reading explained that no refunds were possible during the yearly plague. Clever bastards. Once beyond the lobby, a ceaseless chirping filled the air, and cricket corpses littered the hallway and rooms. I still remember the crunching and popping under my feet, as I fumbled toward the bathroom at three am.

Last week, I went to Ephrata PA and checked into a Hampton Inn. The room was clean and spacious. There was a complimentary chocolate bar, some locally made pretzels, salsa, and a bag of Mennonite potato chips with a hand-written note from the staff. But most importantly – as the sign clearly indicates – I was singled out as the guest of honor…for an entire hour!”

To be clear – I have no relationship with The Hampton Inn, and no obligation to say anything nice about them. Furthermore, I can make no guarantee that you will be afforded the honor I just enjoyed, or experience the largesse of Lancaster County. But I’ll tell you this – the girls behind the counter are very nice, and the one from Wales with a funny accent will make you smile.

Assuming of course, you find yourself in Amish country, looking for shelter.