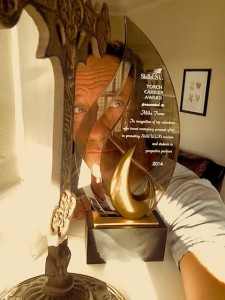 I’ve always been ambivalent about trophies and plaques and various other tokens of accomplishment designed to live forever on walls and mantles. Unless the memento in question falls into the “major award” category – like The Leg Lamp from A Christmas Story – I prefer to display and cherish my various keepsakes in the garage. Last Friday though, I was honored by my friends at Skills USA, and received from them the rarest kind of souvenir – the kind I will actually show off.

It’s called The Torch Carrier Award, and as I told the audience that watched me receive it, this one is actually going on the mantle and staying there. In my future efforts to live up to this honor, it only seems sensible to display it where the occasional house guest might notice it shining in the afternoon sun and say, “Hey Mike – that appears to be a major award you’ve got there on the mantle, shining in the afternoon sun. What’s it mean?”

At which point I will explain how Skills USA trains the next generation for millions of good jobs that actually exist, and in the process, “carry the torch” a bit further.

Of course, this talisman really belongs to you, which is the real reason I’m bragging about it here. Every year, mikeroweWORKS sends 50 finalists to the national competition. These are kids who qualified for the finals, but can’t afford the price of getting there. Since 2010, we’ve spent $170,000 to make sure that kids who qualify have a chance to compete, because frankly, there is no better ambassador for the skilled trades than a kid who is determined to learn a useful skill and put it to work. Ultimately, the money that came from mikeroweWORKS originated with many of the good people on this page.

So, if you’re one of those people – thanks. Please feel free to photoshop your own face next to, (or over) mine, and display this image somewhere conspicuous in your own home. You’ve earned it. And if you’re wondering what the hell I’m talking about, go here for more pictures and details of my (our) Major Award.

PS. Thanks also for your ideas re: Somebody’s Gotta Do It. I’m really trying to let the people in the towns we visit have a say in who they think should be featured on the show. The trip to KC proved that can happen. We got hundreds of great ideas from Facebook, and I’m sorry we couldn’t shoot them all. What we got though was really great. I’ll be asking for more suggestions later today or tomorrow. Looks like we’ll be in and around Philly in two weeks. I’ll check back when I know for sure.