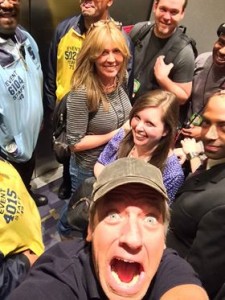 Well, that was fun!

Two speeches, three panels, 7 interviews, hundreds of exhibitors, one robot, a truck from the future, my very own security team, a Swiss Ambassador, and 400,000 visitors. I’m pretty sure I met them all. Far as I’m concerned, STEM now means “Spectacular Turnout Enveloping Mike.”

Not that I’m complaining. The mikeroweWORKS Pavilion was a big hit, and I’m humbled by the enthusiasm that surrounded our little slice of the festival. It didn’t really hit me until I walked through it myself, but 12,000 square feet is a crap-load of space, and I can’t believe who we filled it with. Allow me to boast.

Two of the biggest companies in the world – Caterpillar and Walmart – supported our pavilion in a big way, and made a really persuasive case for skilled labor through the lens of science and technology. I’m not sure that’s ever happened before, but it was great. Turner Industries was there, along with Tech Shop, Employment Express, and Fair Oaks Farms. We also had three great trade schools – UTI, MTI, and Tulsa – showing parents and kids precisely how they could learn a useful skill for a reasonable price. Additionally, we featured Skills USA, The Boy Scouts, Go Build Alabama, Skilled Jobs Direct, Ingalls Shipbuilding, and The Future Farmers of America. The American Welding Society brought their mobile welding lab, which people loved, and Koch Industries had a very cool display that probably surprised a lot of folks.

Point is, mikeroweWORKS had more diversity than anyone else at the Festival. I’m sure of it. Every part of employment was represented, from non-profit to big business. Union to non-union. Schools, youth organizations, agriculture, and global powerhouses. On every front, we challenged people to put the “skill” back in STEM. And the people dug it.

Lot’s of stories worth sharing, and a few photos I simply can not. Running for a plane. Boston bound. More later.

PS More photos here, along with a humiliating dance number with a robot.

PPS Regulars here will know Snarkfest from the Wall. Snarkfest has a blog. And she had the unmitigated temerity to request an interview with me. Naturally, I had the dubious judgment to accept. Well, the woman showed up with her daughter at the Festival, (at my sketchy invitation,) and proceeded to force her way into my greenroom. There, she reeled off a volley of questions that would make Mike Wallace look like a shrinking violet. Her poor daughter (Jenn) held the camera for nearly an hour before she collapsed in a puddle of her own pee, dislocating her shoulder and effectively ending our time together.

Her blog is here.

Part one of our “interview,” is here.

Watch, and be inspired.

One thought on “Mike Writes about DC and USASEF”