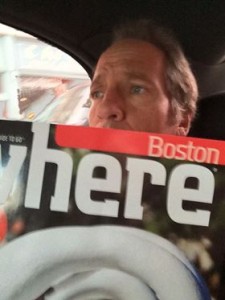 I’m typing in the back of a taxi just outside Logan Airport, headed to an event in Boston. DC was great, but I’m happy to be out of there. Lots of rain, lots of traffic, lots of gridlock – metaphorical and otherwise. The place always makes me feel 15 minutes late, even when I’m early.

Congress was a kick, as always. I spoke to the House Committee on Natural Resources this time, and addressed my comments to The Honorable Doc Hastings. Prior to that, we took a selfie, at the Chairmans request. Brave new world…

My message was one you’ve probably heard from me before – the need for a PR campaign focused on promoting the many opportunities in skilled labor and the relevance of “alternative education.” The purpose of said campaign? To close America’s skills gap.

You’ll be pleased to know that I was on my best behavior. I wore a suit, (sort of) and left my hat in the car. I couldn’t find a tie in DC for less than a hundred bucks, so I went with an open neck on principle.

One thought – many of our elected officials seem worried that a vigorous support of vocational careers will be interpreted as a de-facto attack on higher education. Believe me, I get it. In spite of my own best efforts to position all forms of education as equally critical to a healthy workforce, I am now routinely described as “anti-college.” That of course, is total bullshit. I’m not opposed to people going to college at all – I’m just opposed to people buying things they can’t actually pay for. Especially with other people’s money.

As for the notion of a PR Campaign, there was interest, but little time to dive into details. In general, I proposed the model that launched the old “Keep America Beautiful” campaign. (Remember the Indian weeping by the side of the highway?) That campaign actually changed perceptions. It was launched by a consortium of American business, government agencies, non-profit organizations, and concerned individuals. The goal of that campaign was to foster a national “cleanliness ethic.” I figure we can do the same for a national “work ethic.” The dots are in place – they just need to be connected.

Anyway, I’m off to visit the home of the one and only “Spenser” – my second-favorite fictitious detective who the amazing Robert Parker had the good sense to locate in Boston. After that, another speech, another plane, and in the words of Evita – Another Suitcase in Another Hall.

PS. If you’re desperate for more on my trip to The Hill, a reporter named Elizabeth Kreft ran through the rain and literally dove into my SUV as I was trying to leave. She interviewed me on the way to the airport, and recorded the whole thing. (Seriously, this girl is going places.) Her piece aired a few hours later.