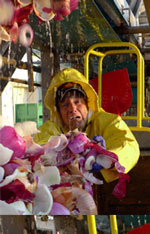 That’s a tough one.

Nobody likes a bully, but they’re easy enough to deal with if you’re willing to fight back.

Crybabies on the other hand, while not overtly dangerous, pose a more insidious threat to polite society. They sow the seeds of victim-hood with their chronic whining, slowly replacing personal responsibility with self-pity and misplaced blame.

Either way, bullies and crybabies are both a drain on the species, but relatively harmless when compared to the specter of the dreaded Cry-Bully – an unhappy hybrid of the two. Every now and then I stumble across one of these cowardly Gollums, usually in a position of power and influence.

Such was the case last night, when I found this charming note in my in-box.  It’s from a first class Cry-Bully named Ken, who works for a very large trade group called the Textile Rental Services Association. Check it out:

Pilgrim gave me your e-mail address a few moments ago when I asked how I might be able to get this e-mail quickly to Mike. TRSA wants to extend Mike the courtesy of telling him about our plans before we launched our boycott. Below is the announcement we plan to send to the textile services industry. Joe Ricci, our CEO, is also trying to get this to Mike today.

You can read more about our organization at www.trsa.org.

TV personality Mike Rowe obviously does not recognize the implications of his efforts to tarnish the image of sustainable, reusable shop towels. We believe disposable industrial wiper interests are taking advantage of Rowe’s reputation as a defender of the American worker to promote their purely financial interests through online videos. Rowe’s baseless comments risk thousands of American jobs and his own credibility.

Rowe has leveraged his “Dirty Jobs” TV role into a public persona and spokesperson for blue-collar laborers who contend with heavy soils to earn their living. Unfortunately, it appears he has inadvertently turned his back on these same workers by publicizing self-serving, weak scientific research conducted not to protect workers, but to promote disposable industrial wipers. In addition, his proposal to remove the reusable shop towel eliminates a necessary tool millions of Americans have used every day for decades to perform their work safely and sustainably.

While we applaud Rowe for bringing tremendous positive attention to millions of jobs that are often unappreciated but necessary, his endorsement undermines these efforts. To continue his mission and prevent economic harm to thousands of workers, we encourage Rowe to disassociate himself from these claims. TRSA recommends an immediate boycott of any Rowe-endorsed products such as:

To be honest, I thought Ken and Joe were kidding.  I mean seriously, who reacts like this? Did Toyota attack me personally when I pointed out that Ford had better quality? Did The History Channel threaten me when Dirty Jobs began to cut into their ratings? Did Levi’s cry foul because I said my Lee Jeans were stronger? Of course not. And yet, Ken and Joe have called for a boycott of all things Mike Rowe, because I participated in an awareness campaign that they do not approve of. You can see it for yourself on their website, right here.

These are the facts. An independent third party has proven beyond a shadow of a doubt that 100% of freshly laundered shop towels tested showed traces of toxic heavy metals. You can see the research for yourself, here. Kimberly-Clark Professional asked me to help share those findings, and I said sure.

Hence, a few little web videos that – thanks to Ken and Joe – millions of people will now get to see, here.

Obviously, Ken and Joe are in a tough spot, and if they weren’t trying so hard to embarrass me I might have some sympathy for them. After all, they run an organization that represents those companies that actually launder these very same shop towels – the ones that have been proven to contain toxic heavy metals immediately after the laundering process. This research is a real problem for them, and I’m sure they’re under all sorts of pressure to hush it up. Since July, they’ve been protesting the research results and although Kimberly-Clark Professional responded to their protests, here, they’re still not happy. So what’s the solution?

Challenge the facts in court?

Sue the independent third party that conducted the study?

Challenge the scientists and experts that shared the results of the study with me?

Apparently not. After looking at all the options, evaluating all the facts, and considering all the research, Ken and Joe have decided the only sensible way to handle this problem is to ask their members to immediately stop watching Dirty Jobs and quit buying Ford Trucks. Brilliant.

Here at mikeroweWORKS, I don’t have a director of PR. Perhaps I should hire one, but until I do, I think I’ll just tell you what I really think, and let the chips fall where they fall.

Ken. Joe. I think you’re both a couple of big, fat, Cry-Bullies. Come on fellas – this is America. People compete for business every day. Sometimes you win, sometimes you lose. And sometimes the facts just aren’t on your side. But is attacking me really the best you can do? If you’re really concerned about the people who use your product, why not protect them?  Why not persuasively refute the data? Why not aggressively disprove the facts? Why try to kill the messenger?

Look, I have nothing but respect for your members, and for the people who use shop towels. And I really do appreciate your concern for working men and women. But your tactics are utterly transparent, and I believe that anyone with a shred of objectivity will see through this strong armed bull crap. Gimme a break.

Yours is a billion dollar industry. Do you really think no one is ever going to try and take a piece of it? Grow-up. Man up. Launch your own campaign. Make a case for shop towels. Hire Bear Grylls. Build a better washing machine. Do something. Just stop crying in public.

11/22/11 UPDATE FROM HQ – We’ve just learned that TRSA has issued the following statement:

TRSA believes that many of the assertions made in the Rowe attack are distorted and not in the best interests of the American workforce. Shop towels perform an important function and offer a safe and reusable alternative to disposable wipers, which are environmentally unfriendly.

Our use of the word “boycott” in our Nov. 21, 2011, e-mail was a mistake. TRSA recognizes that group boycotts or concerted refusals to deal are not permissible conduct. Every TRSA member and all competitors must make individual decisions regarding how to address claims made by promoters of competitive products. TRSA is opposed to any boycott or concerted refusal to deal. It was a mistake to suggest any such boycott. TRSA is not directly or indirectly recommending, suggesting or implying that any course of action be taken against Mr. Rowe, the companies that advertise on his program or his supporters.

TRSA continues to review the various claims made in the Rowe presentations and the underlying research and seeks further input from members on how to conduct the most objective analysis of why shop towels are preferable to disposable industrial wipes. To assist TRSA in this endeavor, click here to participate in an enhanced survey and data-gathering effort.