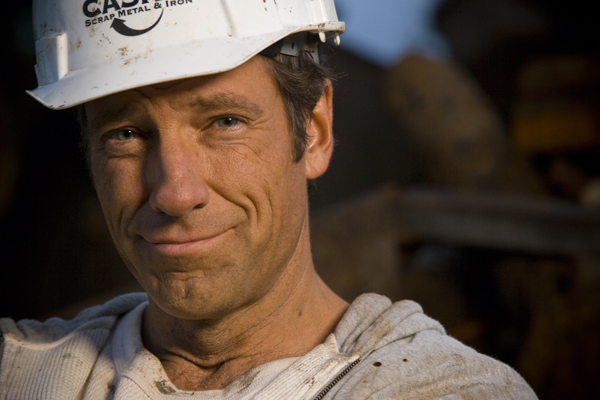 Not since Huey Lewis and the News has America’s working class had such an iconic, affable brother in arms—or elbow grease, or sewage sludge or aviary vomit, as the case may be—as in Mike Rowe. Host of Discovery Channel’s much-watched Dirty Jobs (Tuesdays, 9 p.m.), which casts a loving spotlight and a spitball of mischievous humor on some of the nation’s grungiest gigs, the 49-year-old Rowe has become an unlikely spokesperson for the blue-collar brethren.

Last year, Rowe went to Washington, addressing the United States Senate on employment issues and trade activism. Rowe has used his celebrity status as a platform for launching mikeroweWORKS.com, a trade-resource center giving away more than half a million dollars in scholarships to U.S. students learning labor skills, an endeavor he believes is key to reinventing America’s workforce.

Not bad for an Eagle Scout who sang opera and now spends months of every year knee-deep in bodily fluids with some of the country’s least-recognized entrepreneurs.

Rowe gave us his tips for how to energize your place in today’s market from a guy, who like the rest of us, is “workin’ for a living.”

Fix the Law. “The economy’s in the toilet, and we’re out there smothering the entrepreneurial spirit of America’s youth by requiring they get a permit to sell lemonade on their street corner? How about that? Is it really a mystery we’re having tough times?”

Work Hard, Stay Humble. “Get there before the boss, don’t leave until he does, do the shit nobody else wants to do, make your boss look good, don’t take the credit. Give that a year. It’ll be rewarded. I don’t care what industry you’re in.”

Think Broadly, Not Big. “There’s this idea I’ve got: What if 9 percent unemployment isn’t really a reflection of 10 million too few jobs, which is what everybody seems to imply—we don’t have enough jobs, we just need to make more jobs. What if it’s really a reflection of 10-million too many employees? I don’t mean 10-million too many people; I mean 10-million people who think like employees—people who don’t think like entrepreneurs, people who have been trained for the last three generations that the great new job is going to be created for them, people who are waiting for opportunities to be presented so merrily they can roll along. What if it’s up to us to find the jobs?”

Get Dirty. “I can’t tell you how many millionaires I’ve met on Dirty Jobs who are, literally, covered in shit. It’s unbelievable. When you meet more than a dozen, you have a control group. What do they do collectively that most people don’t? They’re the guys doing the jobs nobody wants. They’re avian vomitologists and maggot farmers and window washers and Port-A-Potty plumbers.”

Assume Nothing. “When you’re bent over with a guy pulling blood worms out of the sand, you assume a few things, at least if you’re me. One: Based on his face, he’s probably wanted in 50 states. Two: Based on his smell, he’s probably not welcome in any fine establishment. And three: Based on what he’s doing, he’s lucky to be making any money at all. Then you go back to his house and it’s this beautiful, five-bedroom place, he bought cash. Then you learn he has a summer home, also paid for in cash. Then you realize: I completely misjudged what this guy does. Is he pulling worms out of the ground, or is he part of a kind of people who have found something no one else wants to do?”

Smile. “Attitude means everything. I cringe when I say that, because I don’t want to sound like Dale Carnegie or Tony Robbins. For me, it’s just this idea that comes from [crime novelist] John D. MacDonald’s Travis McGee, one of my all-time favorite characters: The only sensible way for a full-grown man to go through life is with the attitude of a vaudevillian clown. That guy knows he’s going to get a pie in the face. He doesn’t know when, but he knows it’s coming. With that knowledge, he still shows up day after day. There’s nobility to doing what you have to do, even though you know the pie’s coming. That’s the shit that builds character.”

Read another article by J. Rentilly “Mike Rowe Used to Work for Time Off…” – HERE

5 thoughts on “7 Secrets of Self-Made Millionaires”