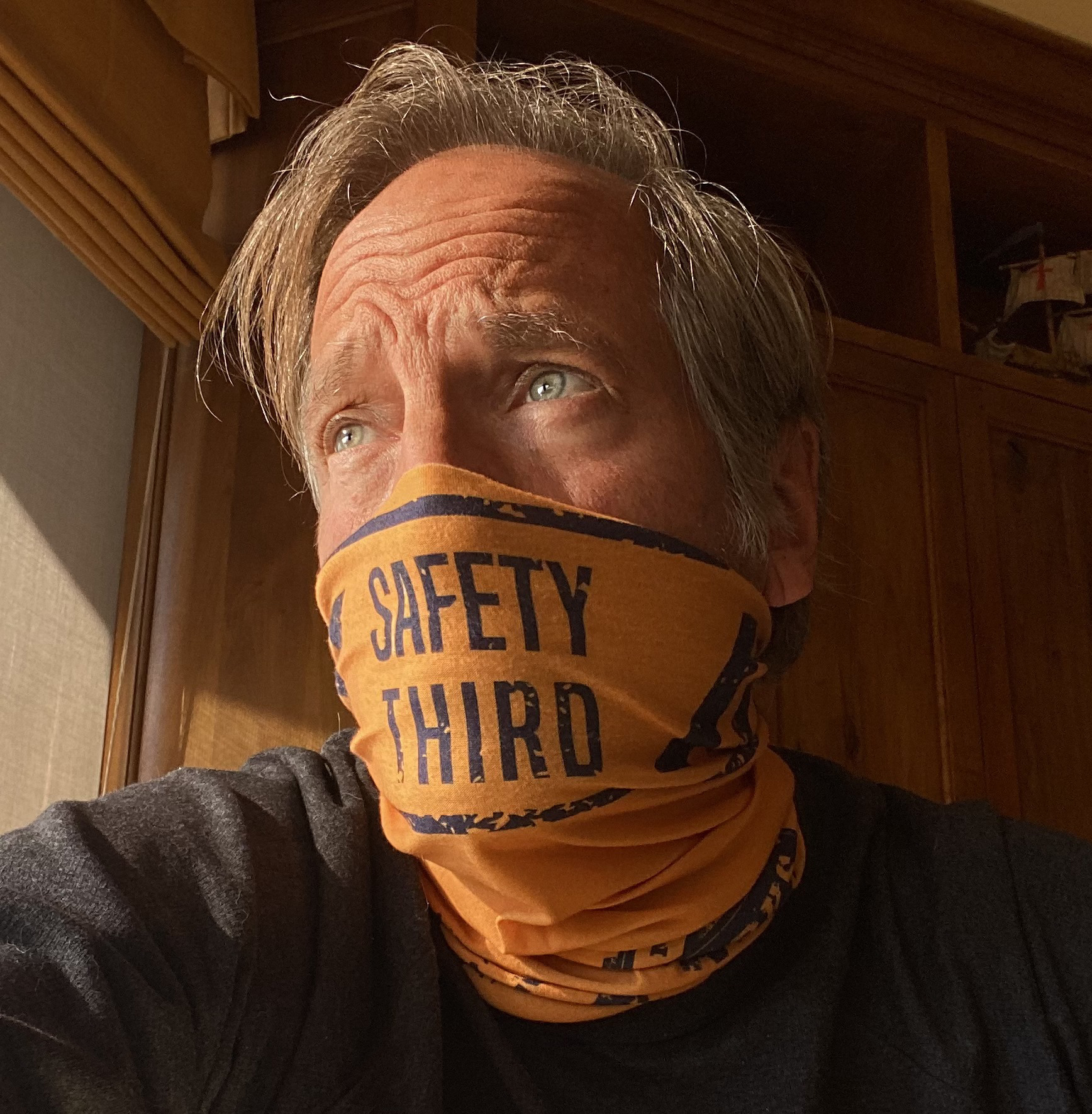 Hi Mike. I think I’m depressed. I know you’re not a doctor, but I saw you play one on TV once, and I was hoping you can explain why I burst into tears every few hours? I’m also wondering if you ever weep, and if so, when? Fran Sykes

Obviously, I’m far too manly and rugged to weep, especially in public, but I did come close last week. I was in LA for the first time since March and staying in a Santa Monica hotel. Friday morning, I woke up early and walked south along the beach to my old neighborhood in the Marina. It was an eight-mile walk, roundtrip, and one that I’ve made many times before. But this walk was different. It wasn’t just the makeshift homeless encampments that stretched for nearly two miles along the beach, or the boarded-up businesses with their handwritten “Closed for COVID” signs hanging sadly in the windows. It wasn’t just the dogged joggers, leaping over the slumbering souls strewn about the sidewalk like human speed bumps. It was the sense that something even more terrible had settled over the entire city. Like the plastic coverings my Aunt used to wrap her best furniture in, there was a film between me and everything around me. But it wasn’t a protective film – it was more like a sheen. A greasy, invisible patina that coated everything and everyone, separating us from each other. It was enough to make a grown man weep.

But of course, I didn’t weep. Instead, I walked back to my hotel and took a hot shower. I’ve had many hot showers over the years, after many “dirty jobs,” in countless hotels and motels in every state, and I can tell you there are few things better than a hot shower when you really need one. But this shower was different. Somewhere between the rinsing and the repeating, and the handfuls of scented soap, and the rainforest shower head that doused me in a delightful downpour, I thought about those poor people living on the beach, sleeping in forts made of stained mattresses. I wondered if they would ever experience something similar? And as I wondered, I realized that the film was still on me, and that no amount of scrubbing would get it off. That too, was enough to make a grown man weep. Though again, I did not.

Instead, I toweled myself off, made some coffee, and checked my email. Two hundred new messages. Good grief. They would have to wait. I went to my favorite news sites, where I learned that the election was still contested, COVID was surging, and Joe Biden was promising to institute a national mask mandate on his first day in office. Then, with just a minute to spare, I logged onto my Zoom account and recorded another long-distance episode of Returning the Favor. You’ll see the episode later this month. It’s a good one. A couple of college kids in New Orleans, trying to save their city from the next hurricane. It gave me hope for the next generation. In fact, it nearly made me weep.

But I didn’t weep. Instead, I called an Uber, and headed to the airport to catch a flight back home. The driver had installed a shower curtain between the front and back seat – a literal shower curtain made of thick plastic with pink and blue ducks on it. He asked me if he could take my temperature before I got in.

He might have laughed, but it was hard to tell behind his mask. Either way, the laser beam that bounced of my head said I was fever-free, so we headed to LAX, where every counter agent stood behind a plastic partition, like a banker, and every traveler wore a mask. Some wore two. I saw one woman wearing protective goggles and rubber gloves, along with an N-95 and what appeared to be a welder’s shield that covered her entire face. I couldn’t tell if she was preparing for surgery or getting ready to pour a foundation. Either way, she wasn’t taking any chances.

From the moving sidewalk, I glided through the terminal and regarded my fellow travelers seated in the waiting areas, each with an empty seat between them. I was struck by the fact that all of them – and I mean every single one – were staring down at their screens. Hundreds of people, all searching for a connection – not with the people beside them – but with somebody else, someplace else. It made me sad, this new and heightened reliance on our screens. It made me wonder if the next lockdown will drive us even further apart? It made miss the days before smartphones, even as I glanced down to answer an urgent text from my office.

But I didn’t weep, Fran. Not even a sniffle. I just walked to my gate and stood at the window, watching the planes come and go. And as I watched, I thought of the Mayflower. Four hundred years ago, one hundred and two Pilgrims climbed aboard an eighty-foot boat and sailed three-thousand miles through violent seas to a place they’d never even seen, just so they could worship the God they believed in. Forty-five of them died along the way. Nearly half! But somehow, they endured. And thanks to them, we not only have a Thanksgiving to celebrate, we have a country to call home. I swear, it’s enough to make a grown man weep.

But I didn’t weep, Fran. I just considered my reflection in the window, as my plane taxied toward the gate. I was wearing my “Safety Third” mask, and the sight of it reminded me that life comes with zero guarantees. The possibility that my plane would actually arrive in San Francisco was something that no one could promise, and right there on the back of my ticket, in very fine print, that risk was made clear. No matter how many times the pilot tell me that “my safety was his top priority,” there was nothing he could do to guarantee my safe arrival in San Francisco. Nothing.

I wondered in that moment, how the Pilgrims felt when they boarded the Mayflower? I wondered if their Captain assured them that “their safety was his priority?” And then I wondered, what would they make of our reaction to this virus today? What would they think of our decision to lock down our houses of worship, along with everything else, in order to fight a disease that might wind up killing a fraction of a percentage of the population? A disease far less deadly than the plagues they dealt with every year?

Obviously, it’s not the kind of question I’d pose here, because doing so would almost certainly lead some to accuse me of “downplaying the dangers of COVID,” which would inspire others to compare COVID to a bad flu. Far be it from me to instigate a food fight between the extremes, but I will say this – somewhere between the “Safety Firsters” and “Covid-Hoaxers,” there’s got to be a sensible approach to living in a dangerous world that’s eventually going to kill us all. That approach, in my opinion, is “Safety Third,” a friendly alternative to “Safety First.”

“Safety Third” is not a call to take unnecessary risk, it’s just another way to say, “be careful out there, but not so careful that you’re unable to function.” It’s also a good-natured reminder that nothing worthwhile in the long history of our species has ever been accomplished by those whose who were unwilling to assume some degree of risk. (And perhaps, a not so gentle reminder to our elected officials, that the rules and regulations they would have us follow are a lot more persuasive when they follow them too.) I’m not arguing that guidelines and regulations aren’t effective and necessary – I’m just saying that extreme measures often come with a long list of unintended consequences, and these lockdowns are no exception. Here’s a report in Time, that claims over a hundred million people could starve as a direct result of the lockdown. https://bit.ly/35CjPqk

In the end, “Safety Third” evolved from Dirty Jobs as an attempt to remind my crew and myself that on the job, and in life, Safety is never really “first,” and those who claim otherwise were probably selling something or running for office. “Safety Always,” was the far better bromide, but not as catchy as Safety Third, which is why you can find it today emblazoned upon my face. And yes, if you think I’m pointing this out in order to sell you a mask that both encapsulates my world view and raises money for my foundation, you are correct!

mikeroweWORKS has already raised well over $100,000 by selling these masks, and if you’d like to support my scholarship fund and comply with your local mask laws while still expressing your displeasure with anyone who argues that “your safety is their responsibility,” then this is the mask for you. If not, there are others to choose from, and all proceeds go to the mikeroweWORKS foundation. Pick the one that’s right for you, and wear them in good health. https://bit.ly/3mvxrt5 I dare say, the Pilgrims would have approved.

P.S. Back to your question, Fran. On the flight back home, I thought of my mom and dad, who are about to celebrate their 60th wedding anniversary this Wednesday. Alas, they will do so alone this year. In much the same way they will celebrate Thanksgiving.

I’m grateful they have each other, but I’m sad and sorry that I won’t be there with them. Honestly, it’s enough to make a grown man weep.