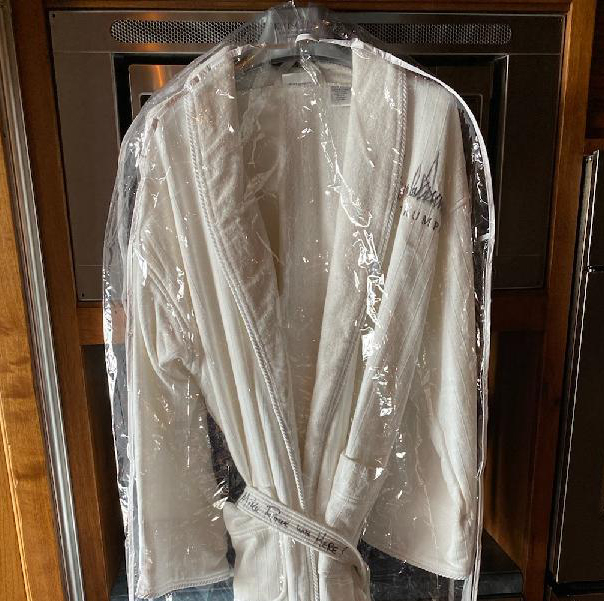 Mike – The Donald Trump Autographed Bathrobe is on fire! Does this mean Trump is going to win? Ha! Seriously, I know you won’t endorse a particular candidate, but four years ago, you made an accurate prediction about the outcome of the last election. Back then, you said your opinion was based on conversations you had with the many people you met around the country while filming your TV shows. How about this year? Care to make another prediction?

I can predict two things with absolute certainty.

1. Half the country is going to be horrified by the outcome of Tuesday’s election.

2. The mikeroweWORKS foundation will benefit handsomely from the sale of Donald Trump’s bathrobe, just as it did four years ago.

Beyond that, beats me. Four years ago, I was on the road every week. This year, I’ve barely left Northern California, where liberals outnumber conservatives by what the pollsters would call, “a lot.” So I don’t have a personal sense of what’s happening elsewhere, other than what I see on TV and read about in the papers. But even here, I can tell you that the “shy” voter, or more accurately, the “reluctant” voter, is a very real thing, on both sides. Here’s what I’ve noticed, from talking to people in and around San Francisco.

Everyone I know who is supporting Joe Biden is united by their contempt for Donald Trump. I don’t mean to suggest that Biden supporters don’t care about specific policy matters – they do. I just had lunch with a group of people who genuinely believe the earth is coming to end in twelve years if fracking isn’t outlawed immediately. These people are supporting Biden for that reason alone. Others are equally passionate about reducing the number of guns on the streets, protecting their right to an abortion, and raising taxes on the wealthy. By and large though, the liberals in my circle of friends hate Trump more than they love Biden. (They should not however, be confused with the “Never Trumpers.” These are typically Republicans who don’t usually support liberal policies or democratic candidates, but hate Trump so much, they’ll hold their nose and vote for Biden.)

Trump voters on the other hand, at least the ones I’ve spoken with, fall into three distinct categories.

1. People who love him without reservation or apology. These people have no real opinion of Joe Biden, beyond their general contempt for all career politicians. They’d vote for Trump regardless of who was running against him. They are neither shy, nor reluctant in their support. I don’t see many of these people in my neighborhood, but last night, 57,000 of them showed up in Butler, PA. Again, to quote the pollsters, that’s…”a lot.”

2. People who are terrified by the prospect of President Harris. These people don’t like Trump, but they worry that a victorious Biden will be forced to resign his presidency shortly after it begins – possibly for health reasons, possibly because of what Tony Bobulinski has alleged. Either way, that would make Kamala Harris the president, and these people do NOT want to see that happen. To them, this is really a race between Trump and Harris, or more to the point, capitalism vs. socialism. So, for them, it’s got to be Trump.

3. People who hate Trump almost as much as Biden voters hate Trump, but who hate the “woke culture,” even more. These people are exhausted by nightly images of rioters and looters allowed to run amuck. They’re sick of the incessant virtue signaling from every quarter of society. They’re weary of cancel culture, safe spaces, “mostly peaceful” protests, the 1619 Project, and the countless attacks on free speech, and lectures from what they believe to be a completely biased media. For them, Trump is not a candidate – he’s a giant middle finger to those who would suppress the Hunter Biden story, or re-edit Gone With the Wind, or rewrite Huck Finn, or disrespect our flag, or topple statues of anyone who doesn’t measure up to their enlightened sensibilities. For these people, Trump is the only way to confront the “wokeness” that now defines big media, higher education, corporate America, Hollywood, and professional sports.” It’s the only way to say, “Enough already.”

I don’t have a prediction, Mark, but I think these “reluctant Trumpers” – especially those I’ve just described – exist in greater numbers than we think. Obviously, I could be wrong, but regardless, it’s hard to handicap an election when the winner is guaranteed to receive millions of votes from people who affirmatively don’t like him. On the other hand, there might be something to learn from an autographed bathrobe that’s currently worth $44,100.00… https://ebay.to/3eeG1t8