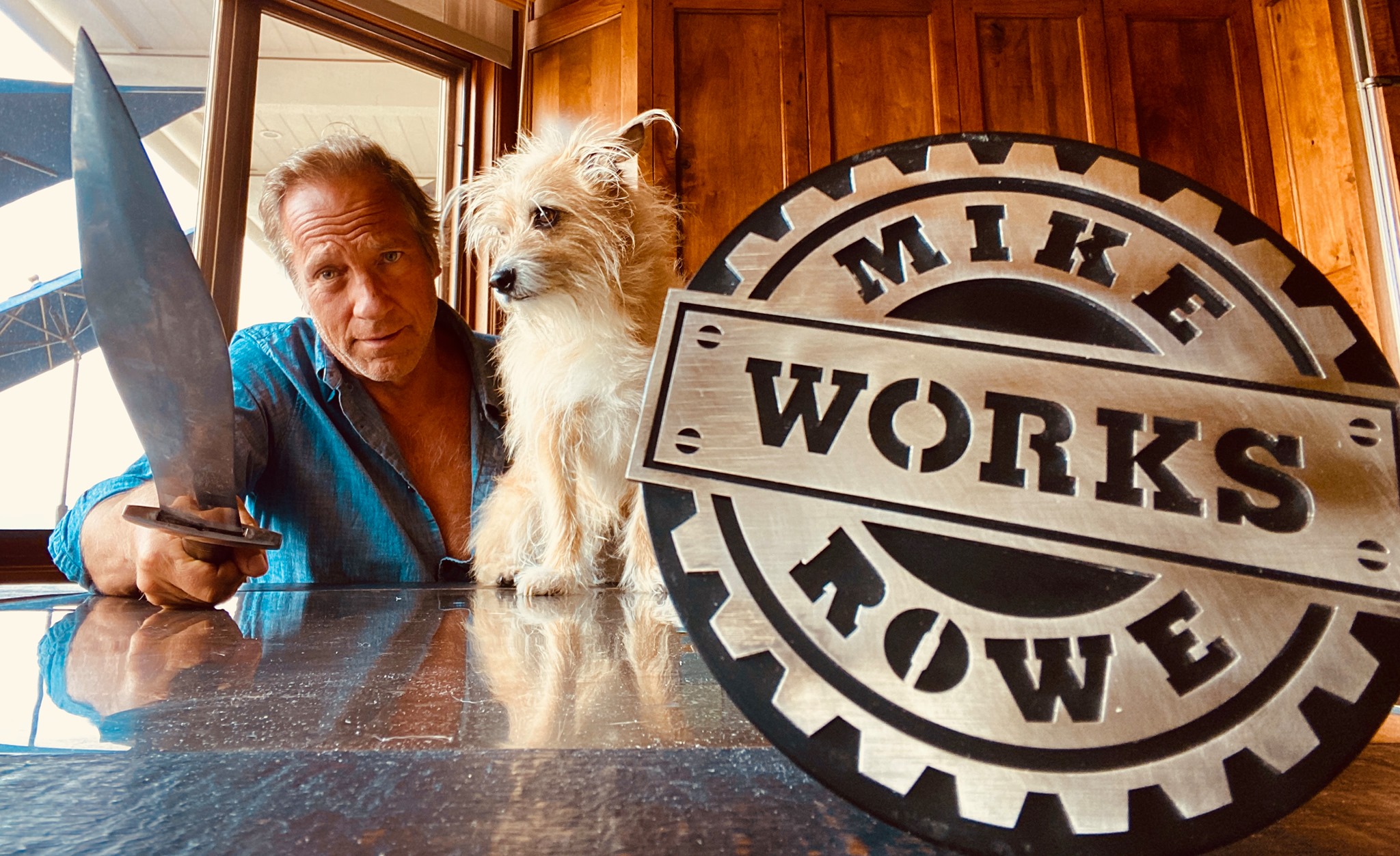 “Freelancer: A medieval term referring to a knight without a king. A warrior who is free to offer his lance to anyone he chooses.”

I only point this out because it’s currently 84 degrees inside my house, and Freddy is not celebrating. Like me, he lives in a home with no air conditioning. Unlike me, he wears a fur coat year round, which is why he’s now regarding me with an expression that says, “Hey, Biped, as a guy who runs a foundation that’s been training the next generation of skilled workers for the last twelve years, perhaps you could drop the sword and place a call to the nearest HVAC company, and have someone who knows what they’re doing come out here to rectify the problem.”

It’s not an unreasonable thought. Maybe later. First, some thoughts for this Labor Day, on the business of freelancing.

If you read my book, you know that I had a lot of gigs between my time in the Baltimore Opera, and my first appearance on Dirty Jobs. What you don’t know, and what I didn’t know until yesterday, are the total number of gigs I had along the way. According to a mountain of old pay stubs, contracts, and tax returns going all the way back to 1984, I appear to have had a thousand different gigs over the twenty years that preceded my debut in the sewers of San Francisco. Literally, a thousand gigs. Narration gigs, writing gigs, acting gigs, modeling gigs, (don’t ask,) hosting gigs, and commercial gigs. On average, fifty gigs a year, over two decades.

A smart aleck like my father might see this pile of paperwork as “evidence” that his son can’t hold a job, and he would not be entirely mistaken. In those days, the only steady paychecks I ever received came from a stint on the QVC Cable Shopping Channel, and from my masters at CBS, who hired me to impersonate a host for a few years on a show called Evening Magazine. But everything else – nearly a thousand paystubs from a thousand different gigs – was the result of my life as an independent contractor – a pivotal time in my career, when the business of finding work was the real job.

I still remember looking at the calendar on the first of every month and wondering how many of those blank squares I’d be able to fill. It was daunting. But once I realized I wasn’t going to starve, I embraced the lifestyle. I loved the challenge of an audition, and the fun of no two days being the same. More than anything, I loved the freedom of working when it suited me, and loafing when it didn’t. Everything I did in those days had a beginning, a middle, and an end, and that pleased me in a way that working as an employee never has, and never will.

I was also fortunate to have inherited my father’s pathological aversion to debt, along with his innate desire to save every penny her ever earned. I still remember how excited I was to learn that I could shelter roughly ten times more in a SEP/IRA, than I could in my employee directed 401K. I saw myself in those days as a guy who ate what he killed, worked when he wanted, paid his taxes every quarter, saved for his future, and enjoyed the hell out of his present. It was, in hindsight, the most empowering time in my career, and I feel badly today, for the millions of freelancers here in California, who have just had the rug pulled out from under them, courtesy of a terrible new law called AB-5.

If you live out here, you probably know that AB-5 compels companies that hire freelancers to reclassify them as “employees.” This is way more complicated than it sounds, and there’s been huge pushback from Uber and Lyft, both of whom say they’ll leave California if the law isn’t repealed or amended. https://bit.ly/2F55PL2

Supporters of AB-5 claim that freelancers are treated unfairly by the people who hire them, and therefore require the “protections” that come with being an employee. Skeptics of AB-5 see the law as a transparent attempt by organized labor to gain more members. (Freelancers can’t unionize, employees can. Hence more employees = more potential union members.) https://lat.ms/328rZVz

To be clear, I’m not looking for a fight with the unions, especially on Labor Day. I belong to a few myself, and I begrudge no one the right to join any union that will have them. In fact, many of those who received a scholarship from my foundation in the past, are working in union jobs today. Welders, steamfitters, pipe fitters, electricians, plumbers…a lot of people are happy to work as traditional employees under union rules. But many others are not. Many others are wired differently. They don’t seek or require the security that is often associated with being an employee. What they seek, is the ability to set their own hours, fund their own pension, pay their own taxes, and so forth. Well, those people just got shafted.

I say this, not a chronic freelancer who loved being an independent contractor, but as an employer who routinely hires freelancers today. Trust me on this, hiring employees is expensive and complicated, and I’m lucky to have a great staff of hardworking people who are great at what they do.But I don’t need any more employees. That’s why, from time to time, I like the flexibility of hiring freelancers when new projects come along that require more specialized attention. It’s good for me, and it’s good for them. But it’s crazy to assume I’m just going to bring all of those freelancers in house, simply because the state doesn’t want them to be independent. I’ll just spread the new work among my existing employees, or find an out-of-state solution, or do the work myself. And big employers like Uber and Lyft? They’ll simply stop doing business in California.

But the big point, in the spirit of Labor Day, is this – AB-5 isn’t just bad for freelancers who like to pick up a little extra cash driving in their spare time, it’s bad for thousands of other freelancers, too – retirees who continue to work as consultants, young parents who need flexible hours to raise their kids, nurses, physical therapists, lots of other healthcare workers, cameramen, writers, audio technicians, and in so many cases, the skilled tradespeople my own foundation helps train. These people aren’t going to gain new protections by becoming employees. They’re going to lose income and opportunity, because they’re not going to be hired at all.

Again, I’m not looking for a fight, but the politicians in Sacramento have most assuredly started one. They’ve waged a war on work. Specifically, a war on the freedom to earn a living outside of an employer/employee relationship. Obviously, that relationship works fine for millions of people who don’t wish to start every month staring at thirty blank squares, or any of the other risks that come with being an independent contractor. I get that. I’m just saying that most freelancers are not children. They’re grown-ups. They don’t need to be “protected” by bureaucrats in Sacramento from the risks they willingly assume. In other words, the gig economy is not the enemy of fairness, not everybody was cut out to be an employee, and Labor Day is not a just a celebration of organized labor; it’s a celebration of all work.

Here at mikeroweWORKS, we salute employees and freelancers alike along with apprentices and business owners – all men and women who have carved out a living by mastering a skill that’s in demand. Last month, it was our privilege to award over a million dollars to over 200 scholarship applicants who wish to pursue a career in the skilled trades. Whatever their classification, we wish them every success in their chosen field. And for those of you on this page who have supported our efforts over the years, there’s really nothing to say but thanks, happy birthday to YOU!

Because if you’re still here, you’re a part of mikeroweWORKS, too. And as the temperature continues to climb in this dog-eat-dog world, it’s more clear to me than ever, that the first twelve years wouldn’t have happened without you. Here’s to the next dozen!