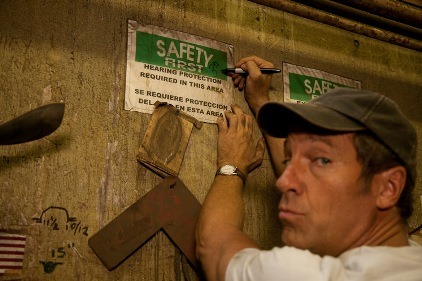 Mike – I just re-watched your Safety Third special on DVD. Genius. Couldn’t help but wonder your current take, since you and 7 million of your neighbors in the Bay Area have been ordered to “shelter in place.” What do you think? Is it unreasonable to wonder if this is all a giant overreaction? – Greg Marsh

It’s true. I’ve been sent to my room for the next three weeks. And yes, I do have some thoughts on the length of my sequestration, and the role of safety in the age of coronavirus.

For the uninitiated, I coined the expression “Safety Third” back in 2008, during an episode of Dirty Jobs. It was a smart-ass way for me to challenge the ubiquity of those Safety First banners, and debunk the popular notion that safety was always the most important thing on the job site.

After years of Safety First indoctrination, and a front row seat to it’s unintended consequences, “Safety Third,” became a slightly subversive way for my crew and I to remind each other that our safety was in fact, our responsibility, and that no amount of compliance could ever keep us out of danger. Safety, I argued, was not a value to be “ranked,” but rather, a state of mind to be maintained. Thus, “Safety Third” became an hour-long special that stirred up a great deal of conversation around personal responsibility, risk equilibrium, and the unintended consequences of ranking Safety above everything else.
Which of course, is precisely what our leaders are doing right now.

Today, in the name of safety, the United States of America has been shut down. Which brings me to your question – are we overreacting?

I honestly don’t know. I’m not an expert, and I’m in no rush to be labelled a “virus denier.” But I am concerned that the medicine we’re prescribing might turn out to be more deadly than the virus we’re trying to kill – especially if we don’t know the criteria by which we can re-emerge from our bunkers. And I’m not alone.

Here’s a rather remarkable article I saw this morning, by a medical professor at Stanford named John Ioannidis. http://bit.ly/2QvjsWv

I think it’s vital to read and consider every word. It’s a measured, data-driven analysis of what we’re doing based on the actual evidence at hand. As the headline reads, Dr. Ioannidis believes we are making decisions without reliable data, and that many of the current victims would have died from any kind of flu. Measures this draconian, he argues, demand a lot more evidence than what we’ve seen so far.

Here too, is another article offers some context from the situation in Italy, which most of the headlines do not. http://bit.ly/2Qtva40

Apparently, 99% of those who died over there, suffered from a myriad of pre-existing conditions. Are we looking at similar numbers over here? Are 99% of those who die from this virus already sick? How many here would have succumbed if this were just a really bad flu season, and how would their deaths be reported on the news?

Again, I don’t know. But I do know that recessions and depressions can impact a country in ways no less catastrophic than a pandemic. And we are most assuredly headed for both, if we continue to operate from a “Safety First” state of mind. Because “Safety First” is never a long-term solution.

For instance, after 9/11, we grounded all the planes for a while, because we needed some time to understand what the hell was going on. And, because we were terrified by an enemy we didn’t understand. But soon, we grew weary of being scared. We introduced new protocols to eliminate as much of the risk as we could and got back to the business of living.

Back in 1939, when London was being bombarded every single day, Britons were understandably terrified. They spent their days and nights in air raid shelters, hoping and praying the German bombs didn’t fall on them. Then, after a few weeks of unrelenting terror, they too, got bored with being scared. They reopened the shops. They reopened the schools. Even as the bombs fell on them, Britons adjusted to a new set of circumstances, and got back to the business of living. Why? Because safety was no longer first.

But this too, is part of the problem. We are being bombarded everyday with facts and information with extreme urgency but no context. Imagine for a moment, if the millions of automobile accidents in America were reported with the same frenzied, up-to-the minute drama as each new virus infection? Imagine if all 40,000 annual automotive fatalities from those accidents, were announced in the same fashion as every virus fatality. Would any of us ever drive again?

Personally, as an avowed non-expert with a large Facebook following, I do think a temporary shutdown makes sense, while we gather more information and answer some pressing questions. Who exactly does this affect? How exactly is it passed? Can you develop an immunity? Does it mutate and if so, how often? And of course, it’s worth repeating that the lockdown wont work unless everyone participates, which is easier to do in Wuhan than it is during Spring Break in this country. Consequently, people are arguing over which is worse – hundreds of thousands of dead Americans, or another Great Depression. Unfortunately, I think that misses the point. I think the worst-case scenario, is both.

Consider this from Dr. Michael Osterholm, who’s quickly becoming one of the most respected voices in this space. 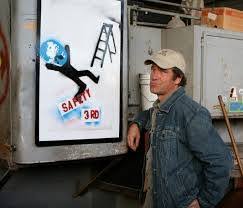 “This is not going to be like a blizzard,” he said, “this is a “coronavirus winter. It will last for months and months. A lot of people have made a decision to cancel events, large meetings, schools, etc., but what they haven’t thought about is what it means if they make the decision to do this now. Tens of thousands of healthcare workers have kids in school. What will that do to their ability to care for the sick? Who will watch their kids?”

Remember, this is the man whose been telling us for years exactly what’s coming. And he’s been right at every turn. But he’s also telling us that shutting down the whole country for long periods of time is not the answer.

“How exactly, do you unring that bell?” he wonders. “If you put these closures into place now, with no criteria, how do you in August, September, or whatever, say OK, we’re no longer going to do this anymore? If you didn’t quarantine with criteria, what’s your criteria for getting back to normal?”

As I wrote the other day, it feels to me like America is going through the five stages of grief at varying speeds. Some of us are still in denial, some are angry, some are bargaining, some are depressed, and some have accepted some version of the reality in which we currently find ourselves. The evidence is obviously sparse, but it would be a mistake in my view, to not treat this thing very, very seriously. If our hospitals become overrun with virus victims, the rest of the population will have no healthcare system at all. But, it’s equally dangerous to think that a long-term shutdown is the answer.

I don’t say this lightly. I have two elderly parents solidly in the “at risk” group, and believe me, I want to do all I can to protect them. But I also know that Safety First is no way to live indefinitely. Safety First is all about life – not quality of life. Which is why it’s always temporary. We are at base, a Safety Third nation. We can’t remain in the air raid shelter indefinitely – if we do, they’ll be no country left, when we finally emerge.

Anyway Greg, your question is not at all unreasonable.
I just wish I had a better answer.