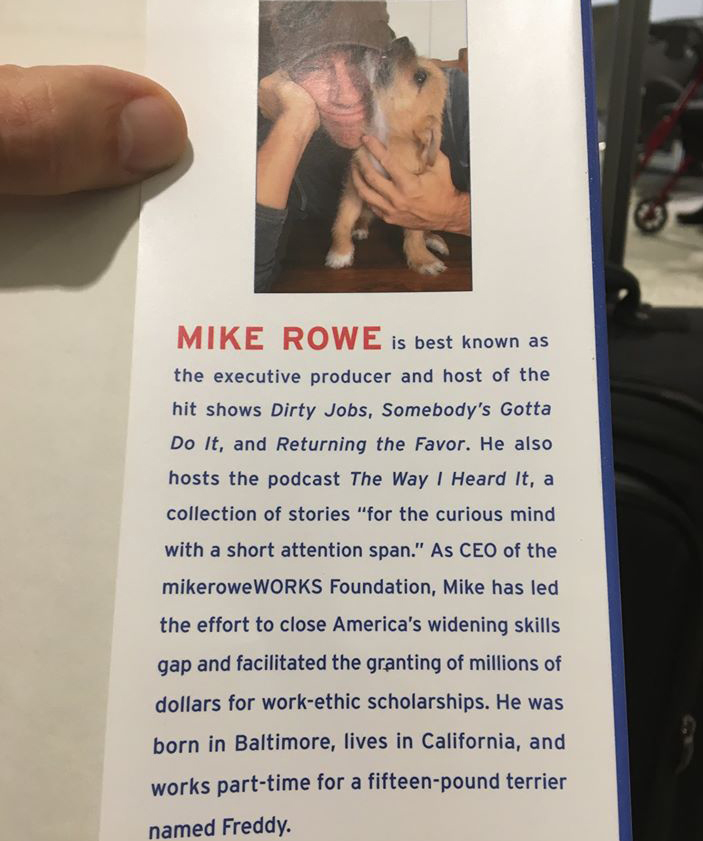 Dear Mike: I just finished your book. At the risk of sucking up, it’s ingenious. A memoir, interrupted by short mysteries about famous people you’ve never met. I seriously loved every page. One question regarding Freddy – that’s him on that back cover, right? Was his name really the result of puppy poop bingo? If so, bravo! Also, is it a coincidence that his name is the same name as the high school music teacher who helped fix your stutter, or did you aim his bottom at the name you wanted him to poop on? Carol Jenkins

Freddy here, jumping in. Partly because it’s Friday, partly because the Biped is incommunicado, and partly because I feel somewhat obligated to offer my thoughts on the runaway New York Times bestseller in which I appear. (To be clear, I have no idea what constitutes a “bestseller,” and from what I can tell, neither does The New York Times. I am however, very familiar with the term, “runaway,” and feel compelled to use it whenever possible.) Now, to your question.

Before I was called Freddy, I lived in a cage and answered to the name of “Forrest.” I suspect I was given this name because my abductors found me foraging for food in a heavily wooded area, 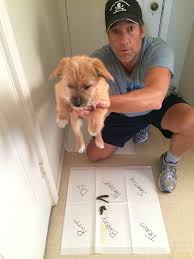 before relocating me to the prison in Marin, from which I was eventually liberated. I was still adjusting to apartment living in San Francisco, when the Biped – unsure of what to call me and not at all pleased with “Forrest” – invited his little Facebook friends to do the job for him. I’m told he selected the top six out of 84,000 suggestions, and wrote those names onto the six white squares of an unfolded pee-pad – six names, one in each square. The Biped then waited to see where I pooped, vowing to go with whatever name I pooped upon.

My memory confirms most of this, as does the photographic evidence, which I’ve attached below. Maybe, had I understood that the exact location of my scat would determine my permanent moniker, I might have dropped the kids off in a different pool, as it were. But that’s not the way it happened. The poop landed without interference, forethought, or any subsequent manipulation, and I have answered to Freddy ever since, (when I choose to answer at all.)

Obviously, I can’t speak to the events of the Biped’s youth, his purported stammer, his relationship with his high school music teacher, the haunted house he occupied once upon a time, his forays into Grand Opera, his various humiliations in the Home shopping, or the many other remembrances chronicled in this runaway bestseller. I can however, steadfastly confirm that everything he wrote about me is true, including my penchant for nibbling on his slippers as he typed away at 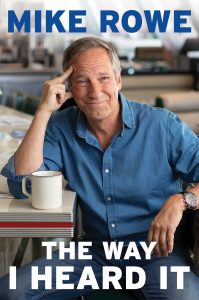 the kitchen table, vowing to never again succumb to the pressures of someone else’s deadline, and muttering under his breath about “long plastic hallways where pimps and thieves run free and good men die like dogs.”

Regarding the pup on the back flap, he is in fact, yours truly, and I’m told I was put there because the publisher thought my youthful exuberance would increase sales. I do not know if this has turned out to be the case, but so far, I’ve seen no extra Kibble in my bowl, or any other sign of participatory remuneration. (Perhaps I should have been on the front, instead of buried away on the inside back flap?)

Regardless, I’d be remiss, and probably chastised, if I didn’t remind you that autographed copies of this runaway bestseller are currently available at mikerowe.com/book, and ideal for placement under the dead tree you people insist on dragging indoors every year around this time. On the other hand, if you’re going to give it away, I recommend paying less for an unsigned copy, and signing it yourself. From what I’ve seen, your signature will be a lot more recognizable.

I hope that answers your questions, Carol. If so, and you really liked the book, I’m sure a 5-star review on Amazon would be much obliged by the Biped, whose protracted absence is beginning to really chap my ass.