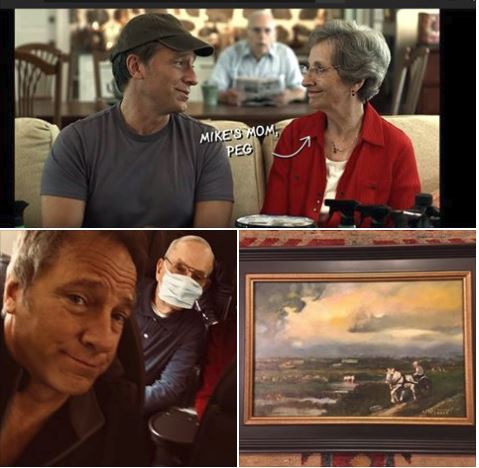 Back in June of 1990, my mother woke up every morning at 3am to watch me impersonate a salesman on The QVC cable shopping channel. She didn’t just watch, of course; she kept notes. Copious notes, along with a long list of helpful tips she believed might delay my inevitable termination from my first job in television. I still have her first critique, hand-written in a very careful cursive, on yellow legal paper.

– Try not to yawn while you’re on camera.
– If you’re going to yawn on camera, try not to stretch too.
– Don’t juggle the Hummels.
– No one wants to know which collectable doll you’re attracted to, or why.
– Maybe invest in a comb?

Her advice was sage, as always, but I was not in the mood for advice in those days. Mostly, I was just trying to stay awake. But Mom kept the advice coming anyway.

– When you talk to viewers on the phone, don’t ask them what they’re wearing. It’s a little creepy.
– Don’t describe the products you’re selling as ‘items formerly handed out as prizes on a carnival midway.”
– Don’t ask callers what kind of trailer they have, until you’re certain they live in one.

My mother despaired when I was suspended for “inappropriate contact with a porcelain nun,” and assigned to the graveyard shift permanently.

“Honestly, Michael, you have such potential. If only you’d stop making fun of the products. And the customers. There’s no telling how far you could go!”

When it became clear that my career in home-shopping would never eclipse the graveyard shift, my mother got a VCR and started taping my shows. This allowed her to evaluate my nocturnal meanderings at a more humane hour, and provide me with even more detailed feedback – which is precisely what she did for the next three years. Long after my boss gave up, my mother was still trying to inspire me with daily doses of encouragement and practical wisdom.

– Don’t describe the Yellow Topaz Pendant as “sputum-colored” or “booger-sized.”
– Don’t use the jewelry ruler to measure the length of your fingers or the size of the model’s ears.

– Do you really suppose the manufacturers of “The 10-Piece Unbreakable Outdoor Dinner Service” “imagined their plates would be cracked over the knee of a host who thought the “unbreakable” nature of their product needed to be tested on live television?

I was reminded of all these moments last week at a wrap dinner in Chicago, as my mother chatted with the producer of the commercial we had filmed earlier that day. Once again, my parents had stolen the show, this time – while endorsing a product guaranteed to stop incontinence. (I swear. Wait till you see this one – you’re gonna love it.) The producer said, “You and your husband have such good instincts in front of the camera, Mrs. Rowe. What’s your secret?”

“Well,” she said, “After studying Michael’s early work so extensively, I’ve developed a pretty good idea of what not to do!”

It occurred to me, as my mother amused the table with her recollections of my many misadventures in home-shopping, that she was just 52-years old back then – a middle-aged mom dragging herself out of bed at 3am to watch her oldest son crap the bed on live television. What was that really like? How does it feel to watch your beloved smart-aleck sabotage his own career night after night?

A few weeks after I was suspended again – this time for an incident involving the existence of Santa Claus – my boss received a long letter on yellow legal paper, encouraging him to move me into a primetime slot. In a very careful cursive, a viewer named “Claire Weaver” wrote, “Mike Rowe is the only host who feels like a real person. Why is he hidden away in the middle of the night?”

A month later, “Fran Miller” asked, “Why can’t all of your hosts be more like Mike Rowe? He’s just so charming and authentic!”

And a month after that, “JoAnn Adams” offered this: “Your primetime hosts could learn a thing or two from the guy at 3am! That fella really is terrific!”

I would have never known about any of these letters had my boss not read them aloud the weekly staff meeting, in a segment he dubbed, “Letters from Mike Rowe’s Mother.” The most impressive thing was the post marks. Fearful of being unmasked, my mother had mailed her fake letters from different towns, but my boss saw right through it. As would any son who has ever known the unconditional and sometimes desperate support that only a mother can offer.

Which brings me to the point…

Mom is 80 years old today, and I’m three thousand miles away. Turns out, those surgical masks I made fun last week might not have been such a bad idea. While my parents are celebrating in West Palm with my brother’s family, I’m horizontal in San Francisco, fighting off some new strain of the flu, and wondering how best to acknowledge the occasion. I thought perhaps – since many of you are already acquainted with my mother – that I might invite you to join me below in wishing her a very happy birthday, and many happy returns. I’d be grateful, and I know she’d be thrilled to hear a kind word from “my little Facebook friends.”

PS Mom – I tracked down the painting you liked, and made the artist an offer she couldn’t refuse. In fact, she’s agreed to deliver it in person as soon as you return to Baltimore. Have fun down there, and keep those masks on! 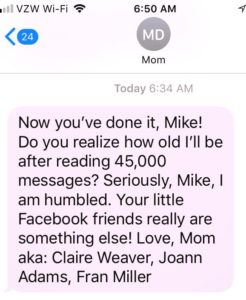 UPDATE:
Friends. I am in your debt. This, from Mom a few minutes ago. By all accounts, she had a great birthday.