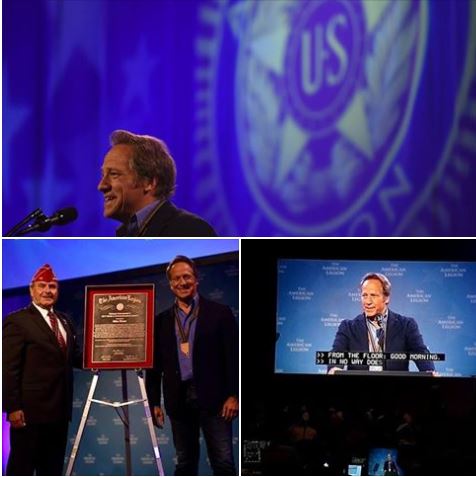 Here’s some photographic evidence of my presence yesterday morning in Reno, Nevada, where I was pleased and humbled to receive a Major Award, presented to me on behalf of two million members of The American Legion.

The official name of the award is The National Commander’s Media and Communications Award. It’s a very handsome plaque that acknowledges my modest efforts to celebrate the men and women of The United States Armed Forces. Given the list of prior recipients, I strongly suspect there may have been some kind of oversight in this year’s selection process, but regardless, I’m keeping it.

I really am deeply flattered by the American Legion’s decision to honor me in this way – far more than my wardrobe might indicate – and very appreciative of the chance to address 9,000 patriotic Americans in one place. 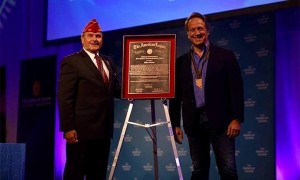 Again – my sincerest thanks again to The National Commander for thinking of me, and to all those who serve. I’m most appreciative.

PS. In other news, there’s still time to nominate and vote for a Hard Hat Hero. Winner gets a trip for four to Santa Barbara in mid-October, where I’ll be loitering on stage and saying unforgettable while enjoying frosty beverages. Details at >Procore Hard Hat Hero.