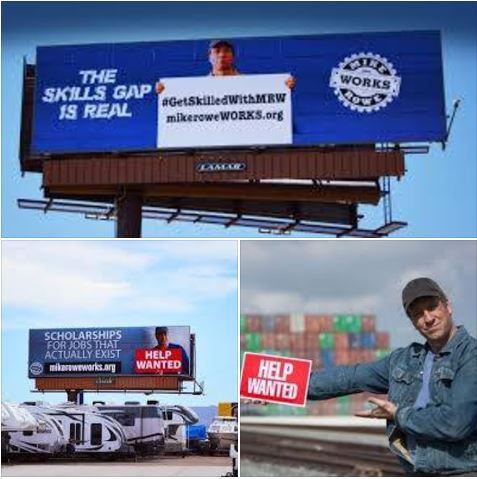 Barry Stout‎ writes… OMG did you have a chat with the President and Ivanka? I was just listening to the announcement and presser about 6 million open jobs in the country…Who knew?!

Ken Lucke writes… Did you write the comments for Sec. Acosta this morning? He sounded almost like you in his push for apprenticeship and vocational training. Your thoughts?

It’s been very gratifying, (and maybe a little vindicating,) to hear so much talk about the skills gap over the last 48 hours. To answer your question, Barry, yes – I did meet with some people from The White House a few weeks ago. I happened to be in DC when I got an email inviting me to discuss mikeroweWORKS with the Assistant to the President and Director of the Office of Public Liaison. George Sifakis and his team were kind enough to meet me at my hotel in Georgetown, where I shared with them my belief that closing the skills gap will only happen if we reinvigorate the trades, and make a more persuasive case for the jobs themselves. George and his team were very engaged, very complimentary, and very interested in hearing about the many success stories we’d seen that start with the mastery of a skill. It was a great meeting, and I was flattered they reached out.

Obviously, I would never presume that my comments had any impact on the current media blitz around closing the skills gap, or the current push for vocational education. I’m not the only one beating this drum, and I seriously doubt that The White House is looking to my Facebook page for talking points and analysis. But…if they are, (Ha!) here’s some completely unsolicited advice, along with a prediction…

In the coming days, the conversation around the skills gap is going to evolve from the existence of six million jobs, (which will shock many,) to the reasons why six million jobs currently exist. This is because the country is sharply divided between those who believe opportunity is dead, and those who do not. Consequently, the skills gap gets very political very quickly. Let’s start with conservatives.

On the Far Right, many believe that people are fundamentally lazy. These people will use the existence of six million jobs to underscore their belief. They’ll say things like, “See? The opportunities are there. If you’re willing to work hard, there’s no limit to how far you can go.” Many conservatives like to talk about the traits of the individual, not the job. Implicit in their argument is the assumption that all unemployed people lack ambition – especially those on government assistance. Consequently, many conservatives will use the skills gap to attack the character of millions of people they’ve never met, and in the process, make all sorts of unfair generalizations about the poor.

On the other hand, those on the Far Left tend to believe that people are fundamentally greedy. These people will use the existence of six million jobs to underscore this belief. They’ll say things like, “Vacant jobs are nothing more than a reflection of supply and demand. If employers offer more money, the gap will close.” Liberals like to talk about the traits of the job, not the individual. They separate “good jobs” from “bad jobs,” and define both on a sliding scale. Implicit in their argument, is the assumption that vacant jobs remain vacant because they’re simply not worth having. Consequently, many liberals will attack the legitimacy of millions of jobs they’ve never held, and in the process, make all sorts of unfair generalizations about the wealthy.

Please don’t let either group hijack the conversation. Remember, most people don’t live on the far left or the far right. It only feels that way, because those people are so damn noisy. Most people are somewhere in the middle. They just want to make an honest living, doing something that allows them to prosper. In many cases, that dream starts by mastering a skill – something far to few understand today.

To close the skills gap, we need to focus on debunking the stigmas and stereotypes that routinely discourage millions of people from exploring millions of available opportunities. We need to challenge the obscene cost of a four-year degree, and the absurd notion that the most expensive form of education is the best path for the most people. At base, we need to make a more compelling case for jobs that actually exist. My advice? Find skilled workers who have mastered a trade and used that trade to prosper. (They’re everywhere.) Tell their stories to a national audience in a completely non-partisan way. Show America that it’s still possible to prosper by mastering a skill that’s in demand.

In a very modest way, this is what we do at mikeroweWORKS. We offer scholarships to people who demonstrate the kind of work ethic we’d like to encourage, and choose to pursue a skill that’s in demand. Then, we share their stories. At base, mikeroweWORKS is a PR campaign for skilled labor – one that takes many different shapes. Most recently, I’ve appeared in five, ninety second videos on this very topic which have so far reached more than 130 million people. These little videos work, in a big way. They get people thinking and talking about career options they’d never considered. If I can reach that many people from my kitchen table, I suspect you guys can reach a whole lot more from 1600.

Bottom line – I know for a fact that hard work combined with the mastery of a skill can lead to a six-figure income in just a few years. I’ve seen welders, plumbers, electricians, and HVAC technicians start their careers with a skill, and quickly morph into a successful small business. Their stories are important. Find them. Tell them. Share them. And let me know if I can help.

And that, as my grandfather used to say, is “another country heard from.”