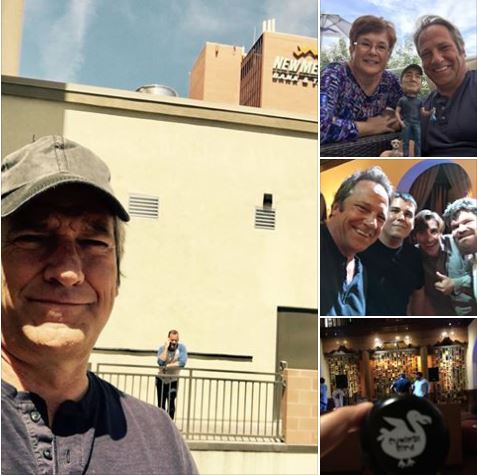 The reason for my visit is very hush-hush, but I can tell you the guy behind me on the telephone is a big-time television producer. Here, in this beautifully composed and candid photo, you can see him actually producing.

Next, we have Janice, a very nice woman who just happened to have in her possession a Mike and Freddy Bobble-head. These are “talking bobble heads,” though I’m afraid the battery on hers has succumbed to The Second Law of Thermodynamics. Sorry, Janice. Hopefully, my signature on the back made up for the inevitable consequence of living in a disintegrating universe.

Next, we have the guys in Cynical Bird, the band playing in the Lobby Bar of the Hotel Andaluz, where I’m currently quartered. Aside from having an awesome name, (who isn’t intrigued by dubious avian?) the guys were kind enough to play “Hotel California” at my request, which seemed weirdly fitting, even though I’m in New Mexico. They also gave me a CD and a yo-yo, for which I’m grateful.

I love bands like this. Allan, (in the middle,) plays guitar and does the vocals. He’s a music teacher in real life. Terry, (with the beard,) plays bass, and does something with numbers for money. Statistics, I think, or maybe projections. And Josh, the drummer, is in the sand and gravel business. (And really, where would we be without sand and gravel?)

Aside from everything the Eagles ever recorded, Cynical Bird does a fine rendition of “I’m a Believer,” which was not, contrary to popular belief, written by The Monkees or by the guy in Smashmouth, but rather, by Neil Diamond – way back in 1967. This too, I learned from The Cynical Birds.