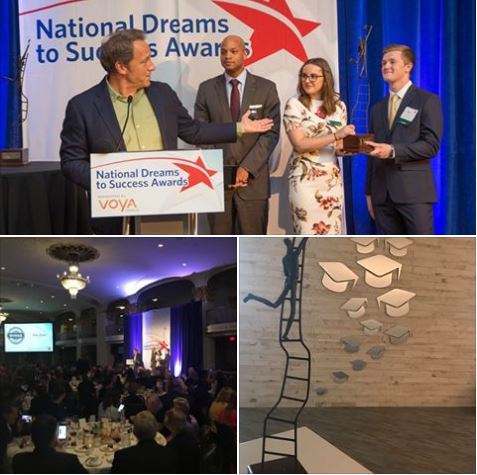 Last night, in a DC Ballroom packed with bloody-do-gooders determined to make America Smart Again, The mikeroweWORKS Foundation was singled out for being unusually awesome.

While I didn’t think anything could top the Christmas Story Leg Lamp I received several years ago from an old girlfriend who knows my suspicion of trophies, I have to say this particular “major award” was a genuine honor to receive. It was issued at the annual “National Dreams to Success Awards,” which aims to honor “America’s Best Student Success Initiatives.”

mikeroweWORKS, to my enduring surprise, was among those foundations honored just after the appetizer, and right before the main course. Here, I can be seen accepting the award without a tie and saying a few unforgettable words, none of which I can recall. Behind me, holding my Major Award and pretending to hang on to my every word, are Michele Ahola and Eric Kovacevich, each of whom received a Work Ethic Scholarship, and both of whom appear to have fallen off the front of a Wheaties box.

If you’ve wondered why I dedicate so much Facebook real-estate to hawking my foundation, please get a load of Michele and Eric. These people possess the very qualities mikeroweWORKS tries to encourage, and their success proves that mastering a skill that’s in demand is still a viable path forward for anyone willing to apply themselves. Here, you can see them featured in a video that played last night, and caused people to weep and applaud with reckless abandon.

After dinner, I was told that mikeroweWORKS was singled out not because we are the biggest or the best funded foundation in the world – but because we are noisy. Also, because we’re unique. We value work ethic above test scores, and focus on vocations that are by and large unloved – i.e., the skilled trades. Happily, it seems people are starting to listen.

I want to congratulate Eric and Michele, along with everyone else who was honored at last night’s event. I also want to thank everyone on this page whose generosity has allowed my foundation to help hard-working people get the training they need to pursue jobs that actually exist. In particular, my friends at This Old House and The Charles Koch Foundation, all of whom attended and clapped real hard when Michele and Eric appeared on the big screen. That was nice.

On behalf of everyone at MRW, thanks for being there.