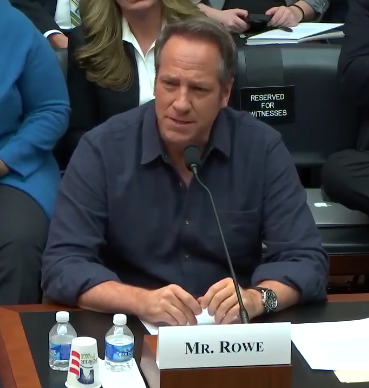 “Mike – I’m really curious about the business of testifying before Congress. What’s it like? Do you get nervous. Is it fun? Were you pissed that they cut you off?

Mostly it’s an honor. Kind of like voting, or serving on a jury. Not exactly fun, but something you absolutely should do if you’re invited. I will say, after three times, there’s an element of Kabuki to the whole process, but that’s true of the whole town, and politics in general. But beyond the protocol and the parliamentary procedures, it’s a great chance to record your thoughts into the public record, under oath. I take that seriously, even without a tie.

No, I wasn’t nervous, and I wasn’t pissed about getting cut off. But I was tempted to leave promptly at 11:00, since that’s when they told me I’d be free to leave. (Thought it might make for a “sharable” moment.) But I didn’t. I stayed till the hearing was officially adjourned, and I answered several questions under oath – which gave me a chance to circle back and touch on a few of the things I didn’t get out when I first had the chance.

I’ve attached an example, which highlights two organizations that I believe will be important moving forward. Careful though – this video is pretty intense, and might not be suitable for viewers of all ages…