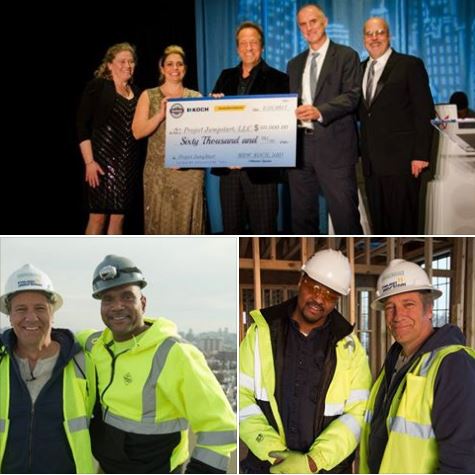 Couple months ago, I wrote an open letter to “Tool Companies of America,” asking for their help on behalf of Project JumpStart.

As many of you know, JumpStart is a pre-apprenticeship program in Baltimore that prepares inner city residents for a career in the construction trades. Their success rate is unprecedented, and this year, I thought it would be nice if my foundation helped pay for their tools. Then, I thought it would be even nicer if I could purchase those tools at a discount. Then, I thought it might be nicer still, if a large tool company got involved more directly with the program. So I used this page to explain JumpStart’s incredible track record, in the hopes that someone would step up and help out.

Well, the response was overwhelming. Tool companies large and small flooded my foundation with offers to help. It was surprising and very gratifying, and I just want to thank everyone who responded. JumpStart is now in touch several familiar companies, and I’m confident their graduates will have a more affordable option in the future than buying tools at retail.

For now though, I want to specifically thank Stanley Black and Decker, a local tool company headquartered just outside Baltimore. SBD not only offered to help JumpStart with their immediate need, they also showed up at last weeks Gala with a check for $20,000. Along with Koch Industries and mikeroweWORKS, I was able to present JumpStart with a $60,000, donation in the form of one of those big old cartoon checks that people love to take pictures of at fancy black-tie events. (I know, I forgot my tie. What can I say? I was under a lot of pressure.)

Many thanks to SBD, Koch Industries, and everyone else who made this year’s gala a success.

PS. The guy on the roof with me is Tyrone Farrins. The other guy is Toemore Knight. Both were unemployed and homeless a few years ago, and by every traditional standard, both were completely unhireable. Today, both are electricians making over six-figures. Project JumpStart is full of such men. Work Ethic plus learning a skill in demand still equals success…