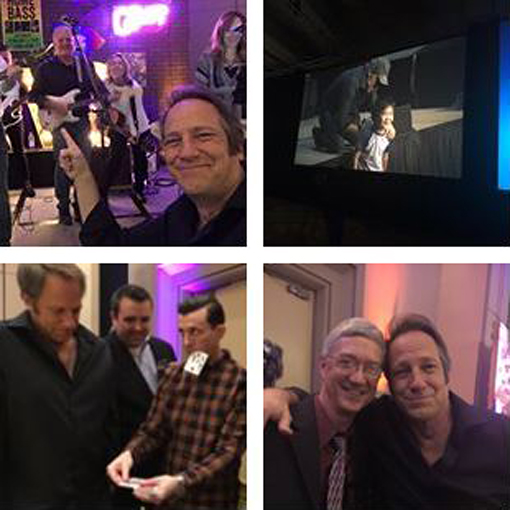 As groups go, you’d be hard pressed to find a better audience than veterinarians. Smart, funny, compassionate, and very thirsty, they make it easy for a feverish public speaker strung out on flu medication to fill 90 minutes. From what I’m told I barely embarrassed myself at all. Many thanks to everyone at North American Veterinary Community. In particular, Tom.
Here, Tom can be seen playing the guitar and singing at the after-party. This is not unusual. Veterinarians love to party. What’s unusual, is the fact that Tom is in charge of the entire organization. Few things give me greater hope for the species than a corporate leader who’s willing to pick up his axe and rock out at a convention. Good for you, Tom. Rock on.

Then, there’s the kid who walked up to the stage in the middle of my presentation and asked for an autograph. Did he have a pen? No. Did he have a something for me to sign? No. So – while I can’t congratulate him for his organizational foresight, his boldness and complete lack of guile gives me further hope for H sapien. Thanks, kid.

Then there’s Lee the Necromancer. Technically, Lee’s a magician, but trust me – with the right amount of Whistle Pig and Theraflu, watching Lee work is not much different than watching Gandalf pull a magic ring out of Bilbo’s ear. He does things with a regular deck of cards that defy logic and reality. Surely, if he can tell me the card I’m thinking of seconds after I think of it, we can close the skills gap. Lee proves that anything is possible, even as he freaks us all out. 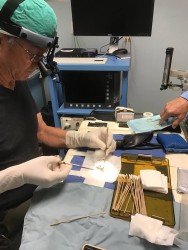 Finally, there’s Don. Don just performed a radical hysterectomy on a gerbil. Or maybe it was hamster. Hell, I can’t remember. All I know for sure is that his iPhone is full of images documenting the process. I’ve attached a few because, well, why not? I mean, how often does a man whip out his cell phone at a party and show you the cancer-ridden reproductive organs of a hamster, expertly removed? Moreover, how often do humans become so attached to their rodents, that they pay guys like Don $1,200 to save them?
Whatever you may think of humans and hamsters and everything in between, it impossible to spend an evening with veterinarians and not recall Jim Herriot’s famous novels, and the poem that inspired them.

All Things Bright and Beautiful,
All Creatures Great and Small,
All Things Wise and Wonderful,
The Lord God Made Them All.

PS. If you’re inclined to find images of The Virgin Mary in waffles and French toast, look carefully at the insides of this hamster, and tell me if you see a face of some sort. Maybe it’s the cold 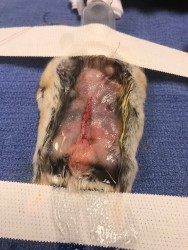 medicine, but I’m pretty sure something is staring back at me. 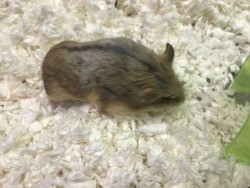 PPS. The hamster survived the surgery, by the way, and Don has predicted a full and complete recovery. Lets hear it for modern medicine!