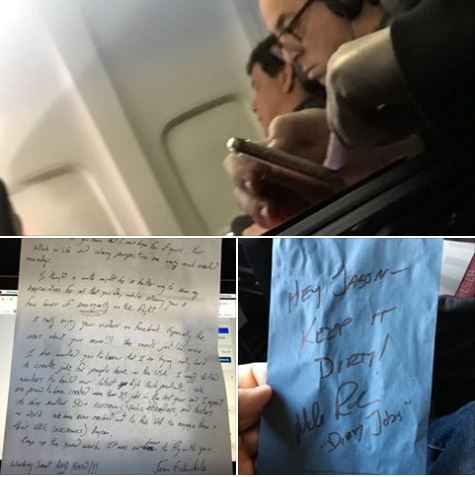 Hey Mike. Don’t know if you are bored waiting for your flight to leave but my friend Jason Eichenholz says he is sitting across from you on the plane. How about blowing his mind and asking him if he is Jason and that you have heard all about him? That is of course, if you are checking Facebook on your phone, like so many do when bored. Safe flight.

Just saw your note. Funny thing. Couple hours ago, somewhere over Nevada, a guy gave me a nod on his way out of the can. I pretended not to notice him because I wasn’t really up for a conversation. I’ve got the flu, my head is splitting, and my nose is running like a faucet. Disgusting, really. Well, maybe he noticed my condition, or maybe he’s just naturally circumspect, but either way, he returned to his seat and left me to my mucus.

Later though, this same guy reaches across the aisle and hands me a note. Judging from the signature, this is the guy you’re talking about. Unless of course, there are two Jason Eichenholz’s on this flight. (This is him, working on a spreadsheet in 6E. Not that I was eavesdropping, but he appears to be involved in some very technical stuff.)

If that doesn’t blow his mind Bryan, nothing will…

PS In turn for posting his picture without permission, I gave him an autographed barf bag. Seemed a fair trade…