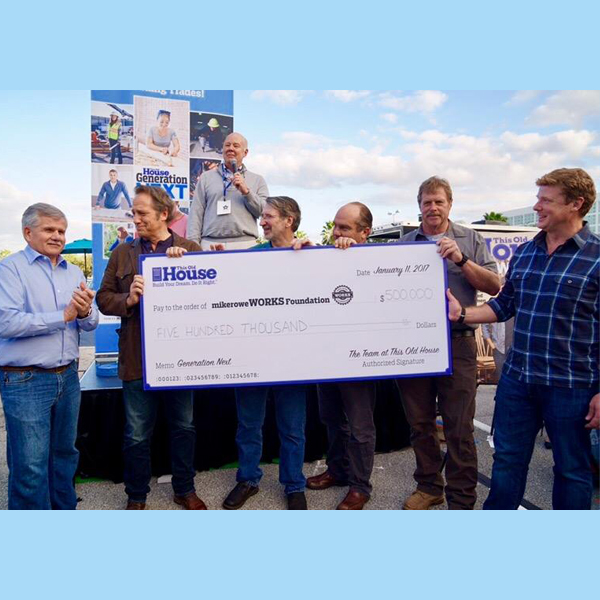 Here’s a check for $500,000 presented to me by The Team at This Old House. As you can see, it’s made out to The mikeroweWORKS Foundation. As you can also see, Roger the Landscaper is the only one in this photo who seems to know where the camera is. Everyone else is looking at Tom the Contractor. Interesting.

Either way, I was genuinely thrilled to be in the company of Tom the Contractor, Norm the Carpenter, Richard the Plumber, Roger the Landscaper, Kevin the Host, and an open bar. And I was profoundly grateful to receive such a generous donation from the team at This Old House, made possible by their very generous sponsors.

By the way, this check was promised to me by Eric the Executive – the guy on stage behind me. Back in August, Eric the Executive told me that This Old House wanted to raise some money to help close the skills gap, and asked if my foundation would use that money to reward work ethic through our ongoing scholarship program. I said “sure,” and asked how much money he planned to raise. He said “$500,000.00,” at which point I spit a mouthful of iced tea back into my glass. (If you knew how many optimistic predictions I’ve heard from well-meaning corporate-types over the last few years, you’d understand.)

I thanked Eric, and promised to spend whatever monies he raised on training the next generation of skilled workers. We shook hands, and I looked forward to receiving a check several years later for ten or twenty thousand dollars. Well, yesterday, Eric the Executive showed up at The KBIS Show here in Orlando with the promised amount. Honestly, I scarcely knew what to say. So I just stood there and looked at Tom the Contractor as he applauded and prayed, along with everyone else.

Everyone but Roger the Landscaper, whom the camera clearly loves.

Later this March, we’re gonna give this money away to people who want to learn a skill that’s in demand. So stay tuned for that. Now, I’m off to the bank to see how the teller handles this thing.

PS. Several new segments of The Way I Heard It over atmikerowe.com/podcast. Today’s, for what it’s worth, is my favorite so far…