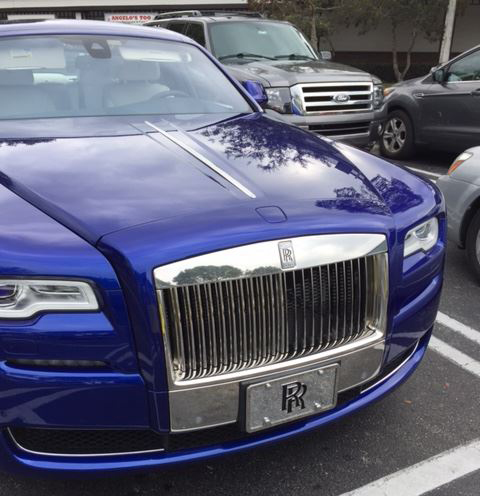 I just got a text from my mother, along with the attached photo. The text read, “Shopping at Publix. Parked alongside a Rolls Royce.” That’s it. Just two sentences, along with some corroborating photographic evidence.

What do you suppose my mother is trying to tell me here? Obviously, she’s intrigued – or possibly bemused – by her proximity to Rolls Royce. But why? Is it because a Rolls Royce is an impressive and somewhat rare vehicle to encounter? Or is it because someone had the questionable taste to paint one purple?

My first thought was that my mother is making some sort of statement regarding the powerful but unfounded correlation between wealth and taste. (“If a person can afford a Rolls Royce, Michael, why in the world would they paint it purple!”)

But if that’s the case, why didn’t she say, “Parked alongside a PURPLE Rolls Royce?” Moreover, why does she want me to know she in a grocery store parking lot – specifically, a Publix? I mean, I appreciate the context, but in this case, what’s the point? Clearly, she’s in a hurry. The text is too brief to indicate otherwise. But it could have been a lot briefer. It could have just read, “Yikes!” or “Purple? Really?” But no – she wants me to know precisely where she is. And that leads me to wonder if her deliberate juxtaposition of an uncommon car in the lot of a common grocery store is meant to convey some kind of larger, egalitarian truth? (“See Michael? Everybody eats, and everybody poops – regardless of what they drive!”)

Or maybe, it’s something more personal.

Mom knows I drive a Ford SUV of the same make, model, and color as the one in the background – the one being upstaged by the purple Rolls Royce. She also knows my vehicle is ten years old. Maybe she’s challenging me to aim higher? To step up my game? Or maybe, she’s congratulating me for avoiding the pitfalls of conspicuous consumption?

Years ago, I starred in a production of “Oklahoma.” It wasn’t very good. Afterwards, Mom came backstage and offered her congratulations. “Oh Michael, I have never seen anything like that. Never! You were really something!”

A few months later, after an equally amateurish production of “Don’t Drink the Water,” she was backstage again with that same warm and comforting smile. “Well,” she said, “What can I say? You’ve done it again!!”

Mom always knows just what to say, when lying is not an option, and the truth is too hard to hear.

When I was twelve, I liked to shoot the mulberries off the tree behind the barn, while my mother fed the horses. One day, I missed the mulberry, but managed to hit a starling, hidden behind a leaf. The bird fell from the tree and landed at my feet, a tiny red dot in the center of its breast, the size of a BB.

My mother picked up the bird, which promptly died in her hand. As it closed its eyes for the final time, she handed it to me and said, with no hint of accusation, “big hunter.”

It was a stunning rebuke, delivered in just two words, by a woman who loves all creatures great and small. I felt terrible for the bird, but I felt even worse that my mother would think I’d kill something so wantonly.

“It was an accident, Mom! I didn’t see him! He was hiding behind a leaf.”

Today is my mother’s birthday, and I know better than to tell you her age. However, I sure am grateful that Carl and Thelma brought Peggy into this world, way back in 1938. And I’m also grateful that she still encourages me when I need encouraging, and lets me twist a bit, whenever I deserve to twist.

She no longer accepts gifts, (for which I’m doubly grateful,) but this year, I think she might appreciate it if someone on this page could explain to her oldest son the hidden significance of parking alongside a purple Rolls Royce, in a Publix parking lot, somewhere in West Palm Beach.

Because honestly…I don’t have a clue.

PS. For those of you following the results of Charlotte’s McCourt’s Mighty Cookie Caper, she eclipsed 11,500 boxes yesterday afternoon. Extraordinary. (Mom – I’ve set aside some Toffee-tastic for you and dad.)

PPS. Because it’s your birthday Mom, Discovery is running a Dirty Jobs Marathon this morning. All Mike, all day. You’re welcome. xox