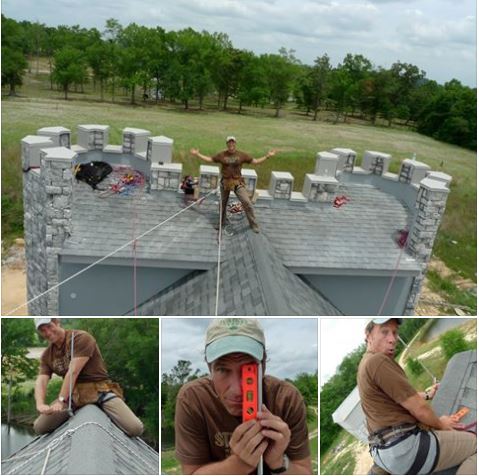 Mike – I’m in need of something to repost today that encourages my friends who are feeling extreme apprehension that America is about to crash and burn. I also need something to remind my friends who are elated today with the upcoming changes, that bragging and gloating is counterproductive. Any wise words you can share? You’re so much more eloquent than myself and let’s face it – people would rather listen to you.

Yesterday morning, I switched on the news to watch the Swearing-In, but fat-fingered my remote control and landed on The Discovery Channel by accident. There, in what can only be called a stroke of counter-programming genius, I saw myself squatting on the roof of a castle, wearing another man’s underwear on the outside of my khakis, attempting to install a lightning rod in stormy weather.

Obviously, images like these beg more questions than answers. Questions like, “What the hell are you doing on a castle, Mike?” And, “Why are you trying to install lightning rods in stormy weather?” And of course, “Why are you wearing another man’s underpants on the outside of your khakis?”

Indeed, those exact questions were first directed to me in a somewhat frantic tone by my executive producer, right after we filmed this particular misadventure back in 2011. But as surprising as these images must have been to my former boss six years ago, imagine my own surprise yesterday at stumbling across them once again, at the exact same moment I expected to see another former reality star – just one channel away – swearing to God that he would protect me from all enemies, foreign and domestic, while upholding our Constitution.

I’m not one to search for deeper meaning where there is none, or find significance where there’s only coincidence. Like a dream, Stephanie, these images are open to interpretation. But it’s hard to look at myself perched atop this faux castle and not conclude that much of America is out there with me, working without a net in stormy weather, hoping to protect themselves from a bolt of lightning by installing a device that attracts it. Politics notwithstanding, that strikes me as a fine way to get yourself fried.

If your friends are really open to the opinion of a B-list celebrity, tell them to be a lightning rod for the principles that unite us as a country. But for the love of God, leave the actual installation work to the professionals. And remember, if you do venture up onto the roof of your own castle, protect yourself from the heat of the shingles below. Republican or Democrat, I recommend an extra pair of underpants, borrowed from a trusted friend, and laughing out loud whenever possible.