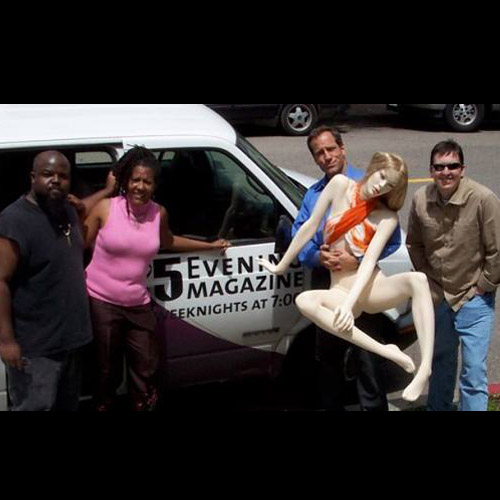 Once upon a time, I worked on a show in San Francisco called Evening Magazine. Technically, my job was that of a co-host, but I was also encouraged to do whatever I could to create something akin to actual content. In that capacity, I rode around the Bay Area in The Evening Magazine Van, looking for unusual people doing interesting things.

One day, I found a woman who owned thousands of mannequins, one of which reminded me of Heather – an old girlfriend from college. This struck me as an ideal way to reconnect with my old flame, without actually reconnecting, (which would have been a disaster.) So I borrowed the plastic doppelganger, and treated her to a series of dates and adventures I couldn’t afford when we were a couple.

Naturally, my friend James – the producer standing to my left – filmed everything, and turned some inexplicably weird footage into a segment that somehow, against the laws of good taste and common sense, made it on the air.

Later, this same collaboration and overall lapse in judgement would lead to a segment called Somebody’s Gotta Do It, which eventually turned into a show called Dirty Jobs. So, thanks Heather. Hope you’re well.