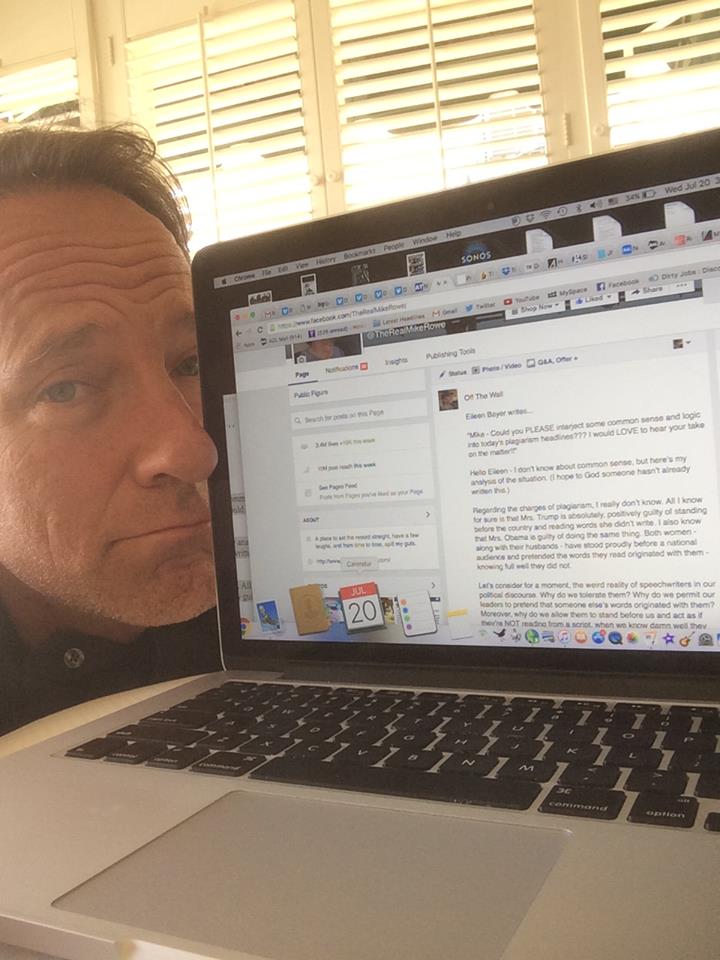 “Mike – Could you PLEASE interject some common sense and logic into today’s plagiarism headlines??? I would LOVE to hear your take on the matter!!”

Hello Eileen – I don’t know about common sense, but here’s my analysis of the situation. (I hope to God someone hasn’t already written this.)

Regarding the charges of plagiarism, I really don’t know. All I know for sure is that Mrs. Trump is absolutely, positively guilty of standing before the country and reading words she didn’t write as if they were own. I also know that Mrs. Obama is guilty of doing the same thing. Both women – along with their husbands – have stood proudly before a national audience and pretended the words they read originated with them – knowing full well they did not.

Let’s consider for a moment, the weird reality of speechwriters in our political discourse. Why do we tolerate them? Why do we permit our leaders to pretend that someone else’s words are theirs? Moreover, why do we allow them to stand before us and act as if they’re NOT reading from a script, when we know damn well they are? Why – in this – “age of authenticity” – do we accept the artifice of a Teleprompter, and all the other pretenses of earnestness that enable candidates to present themselves as something other than who they really are?

I always thought the obvious answer was because we’re a lazy and shallow species who value style over substance. But now, it seems I was mistaken. Today, half the country has risen up in righteous indignation because the words of an anonymous speechwriter – words once read by Mrs. Obama as if they were her own – have been co-opted by another anonymous speechwriter, and given to another aspiring First Lady – who also read those same words as if they belonged to her!

The real question is, do we truly care? Personally, I do. But not as much as I care about the underlying Kabuki that now informs the whole election process.

On the other hand, the right words do matter, regardless of where they originate. I remember, in the wake of the Challenger disaster, Ronald Regan gave a truly extraordinary speech. Every sentence was brilliant, but this part was unforgettable.

“We will never forget them, nor the last time we saw them this morning, as they prepared for their journey, waved goodbye, and slipped the surly bonds of earth to touch the face of God.”

I was 22 at the time, and I literally cried when I heard those words. I was truly touched. Later, I learned those words had been written for Reagan by Peggy Noonan. After that, I learned Peggy Noonan had lifted those words from a poem called “High Flight,” written by an airman who died in WWII named John McGee.

Sorry Eileen – I’m afraid the answers are beyond my pay grade. But these questions did get me thinking about my favorite speech writer – a guy named Peter who made his bones in the Johnson administration.

If you have 5 minutes to kill, I wrote a short mystery about what finally got this amazing writer fired from The White House. It’s called Rose Garden Rubbish, and while I plagiarized the title, the story is totally mine. (Mostly.) https://mikerowe.com/podcast/