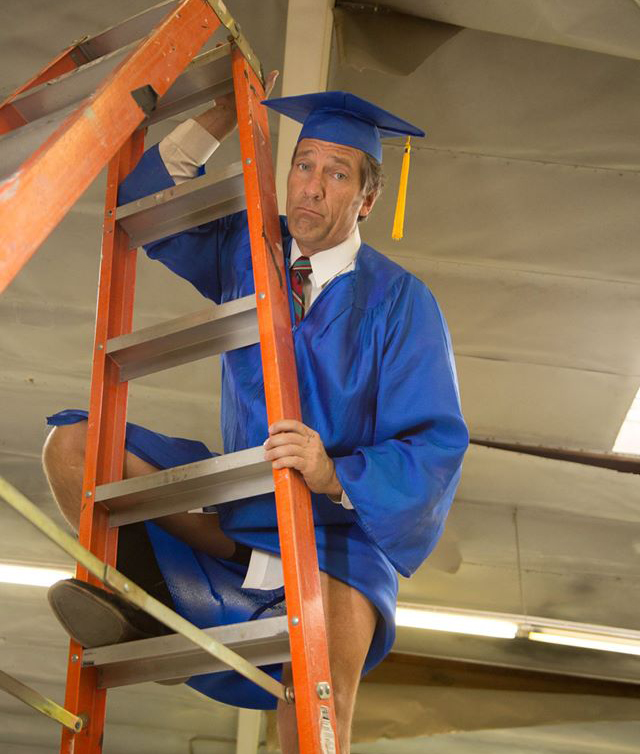 Hey Mike – I hear all the Presidential candidates talking about the “right” of “free” college and how college is necessary to function in our society. I have not heard a single candidate opine about the necessity of training for the “trades.” Why do you suppose our “anointed ones” have such a myopic view of the blue-collar class even as they court their votes?”

If I were to hazard a guess, I’d say that most candidates don’t focus on the necessity of trade schools, because most voters would prefer their kids get a four-year degree from a University. If a majority of voters valued skilled labor as much as they value a sheepskin, I suspect Donald would be campaigning in a hardhat, Hillary would be stumping in steel-toed pumps, and Bernie would be handing out free welding torches.

Truth is, a lot of well-intended parents still believe that kids who attend trade schools do so because they’re not “college material.” That’s an absurd stereotype with no basis in reality, but for the millions of parents who want something “better” for their kids, it’s reason enough to discourage a career in the trades. Unfortunately, this reasoning is not only faulty, it’s destroying economies large and small.

Consider the number of college graduates today, who can’t find work in their chosen field. Hundreds of thousands of highly educated twenty-somethings are either unemployed or getting paid a pittance to do something totally unrelated to the education they borrowed a fortune to acquire. Collectively, they hold 1.3 trillion dollars of debt, and no real training for the jobs that actually exist. Now, consider the countries widening skills gap – hundreds of thousands of good jobs gone begging because no one wants to learn a useful trade. It’s madness. “College For All” might sound good on the campaign trail, but in real life, it’s a dangerous platitude that reinforces the ridiculous notion that college is for people who use their brains, and trade schools are for people who use their hands. As if the two can not be combined.

Last month, I was invited to comment on the annual list of America’s “Top Jobs” and “Top Schools,” (as determined by one of America’s “Top Magazines.”) I passed. Not just because I’m suspicious of lists – I passed because nowhere on the list of “top colleges” was a single trade school mentioned. Not a one. Not surprisingly, none of the careers my foundation supports made the list of “top jobs.”

This is a classic example of how society quietly discourages careers in the skilled trades. We don’t publish lists of careers called “Jobs We Don’t Want Our Kids To Do.” Instead, we publish “America’s Top Jobs,” and leave off dozens of critical professions. Likewise, no one makes a list called “Schools To Attend If You’re Not That Bright.” Instead, we announce the “Top Colleges,” and omit schools that train people for a whole category of critical vocations. It’s a brilliant way to reinforce the existing stereotype, promote a one-size-fits-all approach to education, and guarantee a workforce that’s dangerously out of balance. But the scariest thing about these lists, is not their obvious bias – it’s their degree of influence on otherwise sensible people.

I’m not an economist Jim, but I’m pretty sure this is how college got so expensive in the first place. We start by exaggerating it’s importance. Then we call it a “right.” That creates demand and guarantees supply. Then we free up billions of dollars, and encourage millions of teenagers to borrow whatever it takes to pay the freight. The pressure on these kids is enormous – from their parents, their guidance counselors, and their peers. So they sign on the dotted line, and that’s that. Is it any wonder the cost of a degree has risen faster than the cost of food, energy, healthcare, and even real-estate? Is it any wonder some politicians want to fix the problem by forgiving the debt altogether and making college free for everyone?

It’s hard to look at what’s happening with education and not be reminded of the housing collapse. As I recall, that all started when politicians campaigned on the idea that home ownership was a fundamental part of the American Dream, and therefor a “right” that all Americans should enjoy. Then, those same politicians allowed banks to offer adjustable rate mortgages with no money down to people with no credit and no collateral. Then, they allowed Wall Street to roll out mortgage-backed securities. Ultimately, thousands of Americans were given the “right” to borrow billions of dollars and move into homes that were wildly overpriced.

There’s plenty of blame to go around, and I’m happy to condemn the crooks in DC and Wall Street who drove the bus over the cliff. But the real-estate bubble wasn’t inflated by corporate greed alone – it was inflated with the mistaken belief that living in a house is somehow “better” than living in the same sized apartment; that paying down a mortgage is somehow “smarter” than paying rent. I’m afraid the same kind of thinking that pushed people into over-priced homes they can’t afford has pushed people into over-priced degrees that don’t lead to jobs. And to those arguing that a college education should be a “right,” I’ve got to ask, if that’s really the case, what’s next? Physical fitness?

Seriously, why not? A healthy body is no less important than a healthy mind. So why aren’t the candidates talking about free gym memberships? When they do, I can tell you what happens next – we’ll see a list of “Top Gyms” that provide the very best equipment and the very best trainers. Screw the YMCA – if you really care about getting fit, you’ll enroll at the best gym possible, and if the cost is prohibitive, no sweat – you’ll have access to a “Fitness Loan!” Then, when the price of gym memberships go through the roof, and people start defaulting on their payments, the feds can bail everyone out. Because if physical fitness is a “right,” shouldn’t it also be free?

I had a drinks with a buddy last week who wants free college for everyone, and ran this exact metaphor past him. He agreed that fitness was important, but told me the government doesn’t subsidize gym memberships because physical fitness doesn’t require access to a gym. He pointed out that anyone can get in shape at home doing sit-ups, lunges, and jumping jacks.

I agreed with my friend, but suggested that access to knowledge is not much different. Today, anybody with an Internet connection can access 99% of all the accumulated knowledge on the planet. You Tube alone offers thousands of college courses and lectures for free.

My friend told me it was unfair to compare a course at Princeton to the same course on You Tube. I told him I wasn’t just comparing courses – I was comparing cost. New stadiums, student unions, and beautiful campuses are all very nice, but they don’t make you smarter, or more employable; they just make your education that much more expensive. My friend then suggested we change the subject – which I took as a victory, and we retired to the pool table – where I suffered multiple defeats and picked up the tab.

Point is, there’s an excellent case to be made for attending a four-year school – if you can afford it. But if you can’t, it makes no sense to assume a mortgage-sized debt in exchange for a general base of knowledge that doesn’t lead to a job. This stubborn idea that a four-year degree is the best path for the most people is ruining lives and wrecking our country. And it’s not going to stop if we don’t confront the stigmas and stereotypes surrounding the skilled trades, and dispel them for the nonsense they are.

Whatever your politics, this is not the time for our candidates to be promoting one type of education over another. The truth about education is this – there can be no hope of success without one. Period. But right now, the majority of available jobs do NOT require a four-year degree – they require training – the exact kind of training that parents, guidance counselors, and presidential candidates should be encouraging at every turn.

PS In the interest of putting some money where my mouth is, check out our new Work Ethic Scholarship Program. We’ve scrounged up another $400,000 to train folks for the kinds of jobs I’m talking about. (And if you already have a liberal arts degree, or a secret love of Greek architecture, we won’t hold it against you.) Apply here. mikeroweworks.org