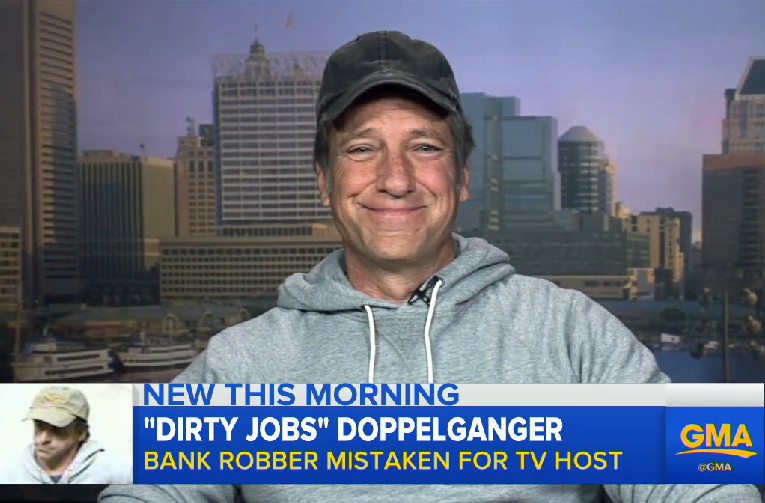 Reality-TV star Mike Rowe says he found out he was being mistaken for a suspect in a bank robbery in Oregon while walking through the airport this week.

“I was walking through an airport, looking at my mobile device and checking in on my Facebook page and realizing that 3 million people were saying, ‘Hey, you should check out the Medford police site because it sure looks like there’s an all-points bulletin out for you,’” Rowe said today on “Good Morning America.”

The confusion surrounding the star of CNN’s “Somebody’s Gotta Do It” began Tuesday when police in Medford, Oregon, took to Facebook to ask for the public’s help in finding a suspected bank robber.

The suspect in the alleged armed robbery at a local Chase Bank was described as “standing about 5’6” – 5’8” inches tall” and was dressed in a gray sweatshirt and light-colored baseball cap.

Rowe, 53, says he, too, saw the resemblance after looking at the photos so he took to Facebook to absolve himself of any alleged crime. 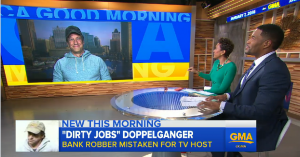 “I looked at it and I laughed and I said, ‘Those guys have a great sense of humor,’ but I can’t deny there is an uncanny resemblance, so I just fired off a quick little missive saying, ‘Hey, for what it’s worth, I’m in Kansas, so be on the lookout for somebody who’s shorter and less attractive,’” Rowe said on “GMA.”

Rowe’s Facebook post and alibi went into even further detail of how he saw his looks as differing from the suspect’s.

“True, I am often attired in a sweatshirt and ball cap, and yes, I do share a certain resemblance with the culprit,” Rowe posted on Facebook Wednesday. “I’ve also been spotted in Medford on more than once occasion, (a lovely town by any standard.) However, I am not “5’6″- 5’8” tall with a small to medium build. The last time I was 5’6” – 5’8” I was in the 6th grade. And the ‘small to medium’ ship sailed some time ago.”