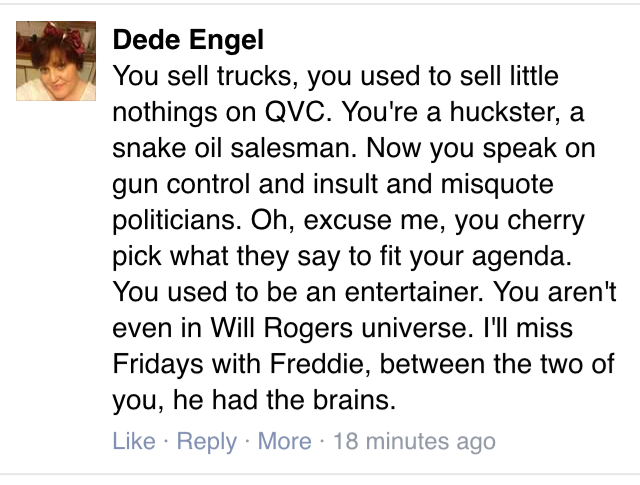 Hi There Dede, and Happy Friday!

You make some excellent points about The Biped. His tenure in the home shopping industry is a matter of public record, as are his many relationships with various corporate masters currently enabling his penchant for hucksterism. In fact, he’s down in LA right now, hawking another revolutionary gizmo, and therefore unable to respond to you directly. So, since it’s Friday, and since you’ve so graciously acknowledged my intellectual superiority, I hope you won’t mind if I respond in his absence.

First of all, I feel your pain. Clearly, you’ve been disappointed by The Biped’s vocational choices and personal opinions. I get it. When I first realized his primary objective in life had nothing to do with pleasing me at every turn, I threw up all over the carpet. Then I ate it. So yeah, I completely understand why you’ve chosen to vomit up your own frustrations for all the world to see. Unfortunately, I’m afraid it won’t work. The Biped is seemingly immune to all forms of virtual invective, including pouting, name calling, unflattering comparisons, or any kind of passive-aggressive cry for help. Trust me – I’ve tried them all, and every single time, I wind up eating my own barf. It’s embarrassing.

If you really want to get The Biped’s attention, I suggest you play hard to get. A few weeks ago, when the Biped failed to supplement my daily gruel with the usual chunk of salmon to which I’ve become accustomed, I resisted the temptation to bark, whimper, or pee on the doormat. I simply ate the food provided. Then, I sequestered myself behind the couch for the next 12 hours. Eventually, The Biped came looking for me, but I remained hidden from view. His calls became more frantic, but I stayed quiet and out of sight. Soon, he became convinced I had gotten outside, and began to search the neighborhood. His panic only escalated as the afternoon progressed. When I finally revealed myself later that evening, the result was most gratifying.

Point is Dede, even if the hard-to-get thing doesn’t work out for you, there’s no upside in flanking your pretty face with a flurry of ugly insults and posting them in a place where the whole world can see your disenchantment. You might be happier following one of the millions of other famous bipeds who share your thoughts on guns, politics, and advertising. But then again Dede, where’s the fun in that?

In spite of his many flaws and deficiencies, The Biped has always been honest with me, and from what I can tell, equally forthcoming with you and his 3 million other virtual friends. I agree, he can be annoying as hell, and exasperating on a daily basis. But I’ve learned to trust his particular brand of snake-oil, precisely because he doesn’t seem to care if I buy it or not. Stick around a bit longer, and maybe you’ll feel the same?

PS. To my knowledge, The Biped no longer sells trucks. His deal expired a few years ago, but I suspect he’s flattered to know the association is alive and well in your mind. In fact, he still hauls me around in a truck with a blue oval on it, so I suppose they’re still friendly.