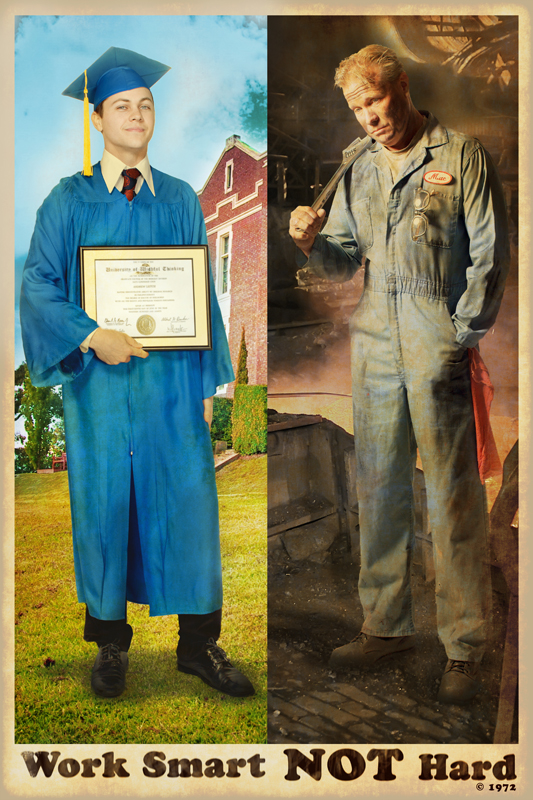 Well, that was fun! My post on Bernie Sanders’ comments regarding the “path to college” versus the “path to prison” has now reached 13 million people. I can’t be sure, but it seems as if I may have stepped on a few toes…

“I used to like you Mike Rowe, and your show. Not anymore.” Tom Noerper

“LOL a VOICE actor who pretends to work for a living lecturing us… get a life you irrelevant old wash up.” Jordan Farrar

“Damn, after reading your rant I can’t see you as anything but really dumb now. Please, don’t go into areas that you don’t understand. Stick to your stupid show. Geesh. Damn, you’re dumb.” Sally Hampton-Brzescinski

And finally, my personal favorite –

“You are a moron.” Lars Taylor

For what it’s worth, Lars may be right. I seem to have broken a few eggs with this one. Regardless, it was not my intention to offend him or any of Bernie Sanders many supporters. I run a modest foundation that supports alternatives to college, and my role is to shine a light on the many thousands of good jobs currently available that don’t require a four-year degree. Along the way, I raise money for our Work Ethic Scholarship Program, and try to keep the conversation lively. Specifically, I try to highlight the unintended consequences of promoting one form of education at the expense of all the others. It’s a job I take somewhat personally.

Back in 1980, my high-school guidance counselor told me the local community college was “beneath my potential.” Mr. Dunbar wanted me to apply at James Madison or Penn State. He said a two-year school would put me on the wrong path, and lead to a life of “wrench-turning.” He then pointed to this poster, part of the “Push for College” campaign in the late seventies, hanging on his office wall. “Which one of these guys do you want to be, Mike?” I still remember the caption on the poster – “Work Smart, Not Hard.”

My decision was easy. Even with my parents help, there was no way I could afford a four-year school. I didn’t qualify for any kind of scholarship, and there was no outside financial aid. But even if there had been, I was not a good candidate for a loan. I was just 18, for crying out loud. I didn’t know my ass from a hot rock, much less what I wanted to major in. So, I stuck to my plan. I spent the next two years at Essex Community College. There, I took dozens of unrelated courses, and started to get a sense of what I wanted to do. (At $26 a credit, I could afford to be wrong.)
Eventually, I earned an AA degree. A few years later, when I had saved some money, I transferred my credits to Towson State, and with my parents help, got a BA in Communications. Total cost for all of it? Less than $10,000. Point is, I was able to start working in my chosen field at 23, free from the crushing weight of a student loan.

Today, that would be impossible. Since I graduated, the cost of college has increased 1,120%. Nothing so important has ever gotten so expensive so quickly – food, medicine, even real-estate…the rise of tuition trumps them all, outpacing the consumer price index by over 400%. The question is why? Why has the cost of college risen faster than anything else?

Obviously, I’m not an economist. In fact, as Lars indicated, I may well be a moron. But if I wanted to drive the cost of college through the roof, I would first encourage employers to make a college degree a condition of employment. Then, I’d tell every high school kid their futures depended on getting a diploma. Then, I’d make sure that pop culture portrayed all non-college careers as second-class occupations. Finally, I’d make available an unlimited pile of money, and encourage those same kids to borrow whatever they needed to pay for that degree.

From what I can tell, that’s precisely what we’ve done. We’ve given colleges and universities free rein to charge whatever they want. And so they have.

Now, the chickens have come to roost. Students hold 1.3 trillion in debt, and many of the indebted are unable to find work in their chosen field. Meanwhile, thousands of jobs currently exist that no one is trained for or excited about. Vocational education has pretty much vanished from high schools, and the skills gap continues to widen. And really, why would we expect otherwise? These are the same jobs we’ve been marginalizing for years. Plumbers, carpenters, welders, and electricians are consistently portrayed as something subordinate to those vocations that require a four year degree. That image from Mr. Dunbar’s wall is alive and well in the minds of many parents, anxious to make sure their kids “live up to their potential.”

Anyway, that’s why my knee jerked when I saw Bernie’s tweet. It struck me as just one more bromide in favor of more borrowing and more spending on an educational system that needs a total teardown.
Now, regarding “free college for all.” Again, I’m not an expert, but I don’t see how giving something away drives down it’s real cost. Are the professors and administrators going to lower their salaries? Are the colleges going to be forced to run more efficiently? I have no idea, but from what I’ve seen of the species, I believe most people do better when they have at least some skin in the game. And I have no reason to assume that making college free will create better students.

Consider health clubs. Most people agree that physical fitness is really important to living a productive life. That’s why society encourages people to exercise and eat right. But we don’t subsidize gym memberships, because we know that simply belonging to a gym won’t make you healthy. You have to do the work. Besides, they’re lots of other ways to stay physically fit that don’t require an expensive gym membership. Mental fitness is no different.

Today, the entire wealth of accumulated knowledge has been democratized. Every known fact can be accessed from a smartphone, and they’re more free courses on You Tube than a curious student could watch in four years of round the clock viewing. Apprenticeship programs and training programs and on-the-job training opportunities abound, but most are ignored, because we’ve convinced ourselves that the path to college is the best path for the most people, cost be damned. And too many employers will look right past a perfect candidate, if they lack a diploma. It’s gotta change.

At mikeroweWORKS, we don’t offer scholarships to four-year schools, because frankly, I don’t care to subsidize football stadiums and Student Unions and Fraternity Houses. (Not that there’s anything wrong with that.) We offer Work-Ethic scholarships to people who want to learn a skill that’s in demand. But we don’t just give money away because “education is important.” We do it because we want to encourage certain qualities not present in every individual. Attitude, ambition, work ethic. Frankly, I wish the government would do that too.

Finally, let me say something to those who are surprised and disappointed to learn that I’m not in “Bernie’s Camp.” Truth is, Bernie and I want the exact same thing – more people with jobs, more people getting an affordable education, and fewer criminals. Reasonable citizens will disagree as to the best way to get there, but there’s no denying our system is broken and in desperate need of fixing. And though I don’t think Bernie’s approach is the right solution, I admire him for trying, and I respect his service to our county.