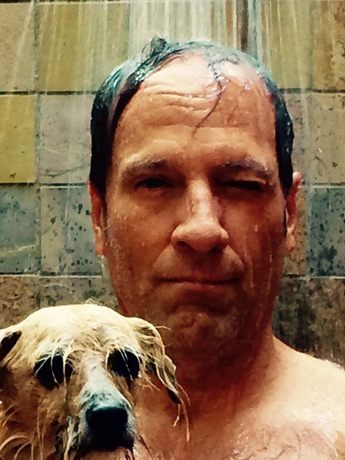 The other day, I was exploring a new patch of forest when I ran into a black cat with a puffy tail and two white stripes running down it’s back. It appeared to pulling worms from the ground and eating them. I’d never seen this kind of behavior in a cat before, so I walked over to get a better look, announcing myself with a friendly bark. Bad move.

This was a high-strung cat, to say the least. It responded to my greeting by jumping a foot in the air, twisting itself around, and landed with a frightening screech. Then, it did something else I’ve never seen a cat do – it farted on me.

There’s no other way to say it. The creature pointed it’s ass right at me. His starfish flared like the muzzle of cheap handgun, and what flew out simply defies polite description. This was more than a blast of foul air – this was an explosion of tangible corruption; a hot spray of sulfuric funk that hit me squarely in the face like a moist and deadly sponge. I can’t overstate the shock at being violated in such a deliberate fashion. Gagging and sputtering, I ran back to the trail, where The Biped held his nose and told me my new aroma could “knock a buzzard off a shit wagon.”

An hour later, through a set of circumstances too strange to recount here, I found myself at a fancy spa in the middle of the woods. There, I was escorted to one of those Rainforest Showers, where The Biped scrubbed me down with an unholy concoction of tomato juice and Herbal Essence. And this brings me to the point of my discontent. I don’t mind the indignity of enduring a forced bath that leaves me smelling like a French whore at a vegetable stand. What I object to, is the rank stupidity of a “Rainforest Shower.” Who in the world thought this was a good idea?

From what I’ve seen of the hospitality industry, lots of high-end hotels and 5-Star Spas have installed these devices throughout. But to what end? Are these supposed to represent some new breakthrough in bathing technology? Maybe it’s just me, but I’m pretty sure The Biped agrees. Standing under a downpour is annoying. I don’t care if you’re stuck outside in the actual rain, or trapped beneath one of these godforsaken sprinkler systems. The water trickles into your eyes, along with the shampoo, the conditioner, the soap, the tomato juice, or whatever else you might use to keep your own coat soft and luxurious and not smelling of ass. Let me be as clear as I can be about this:

The Rainforest Shower is a completely dissatisfying and wildly inferior alternative to the common shower head, which last I checked, is still mounted to the WALL at a logical angle, and can still be counted upon to deliver a controllable stream of water to the intended target in a way that doesn’t feel like the precursor to a vigorous a interrogation. In hindsight, I’d rather go another round with The Mysterious Farting Cat than spend another minute getting water-boarded beneath a “Rainforest Shower.”