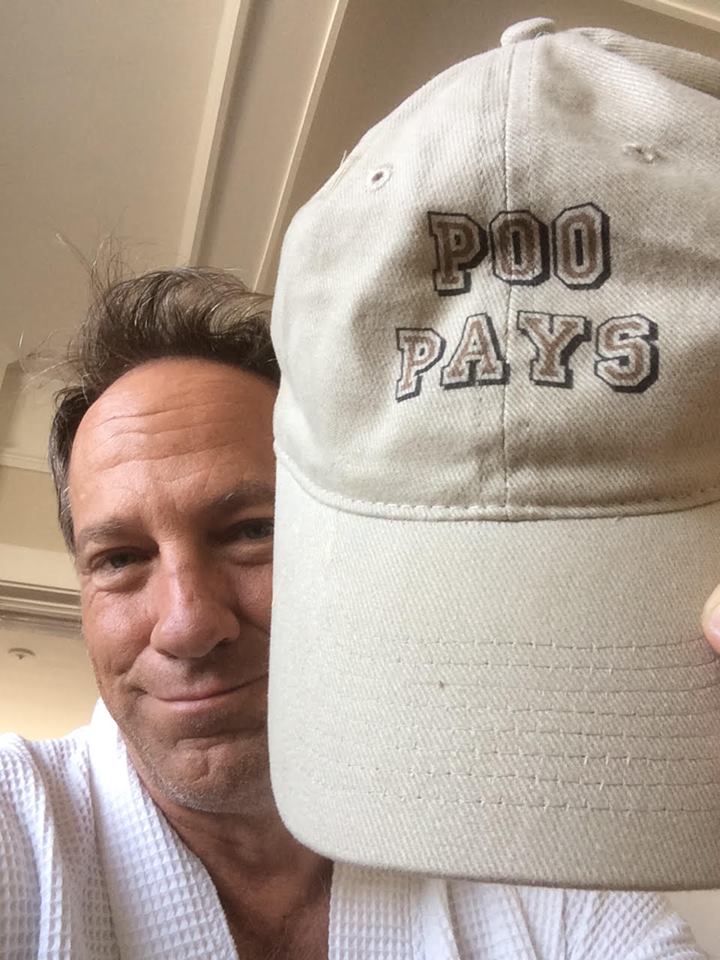 “Mike, we have an in-home debate about why you use the term “poo” instead of other scatological terms. I say it’s because the network censors wouldn’t let you say “poop.” Who’s right?”

You are, sort of.

In one of the very first episodes of Dirty Jobs, I found myself in the sewers of San Francisco, sloshing through a slow-moving tide of indescribable effluvium. At one point, a giant rat appeared from out of the blue, (or in this case, out of the brown.) The creature crawled up my back, perched on my shoulder, squealed into my ear, and dove into my crouch. Naturally, I leapt to my feet, smashed my head into the roach-covered ceiling, and fell face first into the aforementioned chocolate tide. I spit something out of my mouth and exclaimed, “Holy Crap!”

When the scene aired months later, I noticed the network had bleeped out the word “crap.” I was surprised. Since when did “crap” become a bad word? Moreover, why would the term “crap” be deemed objectionable, but not the image of a man crawling through it? Indeed, why was it unacceptable to say “crap,” but perfectly OK to spit it out of your mouth and gag on camera?

I would have probably filed these queries in my ever-widening binder of “Rhetorical and Otherwise Unanswerable Questions” and moved on, if not for a flurry of complaints from angry viewers who assumed I was an out-of-control potty mouth. These people, while righteous in ways I don’t understand, we’re making a perfectly logical assumption. Since no rational censor would bleep a word as harmless as “crap,” it seemed reasonable to assume that I must have said “shit.” And this possibility, was offensive to many.

Again, were this an isolated incident, I might have shrugged it off. But I could see a larger problem beginning to unfold. You see, Season 1 and part of Season 2 was already in the can, (as it were,) though not yet aired. I knew that I had used the word “crap” on numerous occasions, both as a noun, a verb, and an adjective. Now, I was on notice that the network would bleep me for doing so. But I was also on notice that a very vocal percentage of sensitive viewers were as offended by the bleep as they were by the “shit” they mistakenly assumed lay beneath it. What to do?

I called the network and explained the situation. I told my Executive Producer that bleeping “crap” was creating the impression that I was saying “shit,” and causing a big chunk of the proletariat to assume I was more vulgar than I actually was.

“Sorry Mike,” said the EP. “We’ve discussed this at the highest levels, and it’s been decided that “crap” is a word that needs to be bleeped.”

“So in other words,” I said, “I might as well say “shit” instead of “crap,” because you’re going make it sound like I said “shit” one way or the other. Is that what you’re telling me?”

The EP shrugged in a way that all EP’s do when they know they’ve said something profoundly insane. “You can say whatever you want,” she said. “But if it’s on the list of naughty words, we’ll bleep you.”

“Look,” I said, “in future episodes, I’m going to encounter feces from every species. How exactly, do you suggest I refer to the crap in question?”

What followed was the kind conversation that personifies the absurdity of my industry. I’ll spare you all the back and forth; the bottom line, as it were, was a moratorium on “crap” – no ifs ands or butts.

Anyway George, I began to say “Poo” in part because I had to say something, but mostly because it made me think of “Winnie The Pooh.” This brought a whole new layer of unexpected satisfaction to the absurdity of our linguistic standoff, and I confess to enjoying it immensely. Otherwise intelligent on-camera conversations with doctors and veterinarians dissolved into giggles when I insisted they refer to anything involving fecal matter as “pooh.” Eventually, I got a call from my new Executive Producer, (I had ten, over the years,) and asked to explain why I was obsessed with “Poo.”

“But poo sounds silly,” she said.

By Season 3, “crap” was no longer on the list of offensive words. By then though, I was so accustomed to saying “poo,” I couldn’t shake it. Which is why I still say it to this day. (With apologies to Winnie.)

PS. Obviously, times change. CNN has allowed me two “shits” per episode. Though I rarely take advantage of this opportunity, it’s been stressed to me that my “shits” do not rollover, like the unused minutes on my cellular package. In this way, viewers of Somebody’s Gotta Do It, (Sunday’s at 10pm, starting 9/27,) will not be exposed to any more crap than absolutely necessary.

PPS. Speaking of C.R.A.P., the latest episode is here, and a few hours remain to claim this weeks priceless collectible. It’s a good one. The details are here, along with a water balloon fight, for those of you who give a poo.