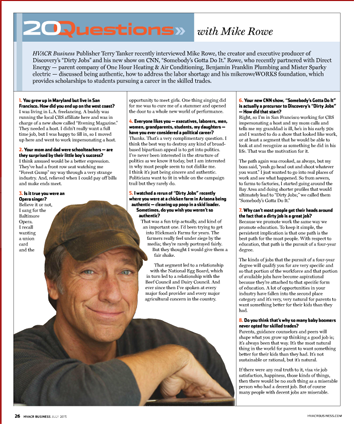 HVACR Business Publisher Terry Tanker recently interviewed Mike Rowe, the creator and executive producer of Discovery‘s “Dirty Jobs“ and his new show on CNN, “Somebody‘s Gotta Do It.“ Rowe, who recently partnered with Direct Energy & parent company of One Hour Heating & Air Conditioning, Benjamin Franklin Plumbing and Mister Sparky electric & discussed being authentic, how to address the labor shortage and his mikeroweWORKS foundation, which provides scholarships to students pursuing a career in the skilled trades.

1. You grew up in Maryland but live in San Francisco. How did you end up on the west coast?

I was living in L.A. freelancing. A buddy was running the local CBS affiliate here and was in charge of a new show called “Evening Magazine.” They needed a host. I didn’t really want a full time job, but I was happy to fill in, so I moved up here and went to work impersonating a host.

2. Your mom and dad were schoolteachers & are they surprised by their little boy’s success?

I think amused would be a better expression. They’ve had a front row seat watching me “Forest Gump” my way through a very strange industry. And, relieved when I could pay off bills and make ends meet.

3. Is it true you were an Opera singer?

Believe it or not, I sang for the Baltimore Opera. I recall wanting a union card and the opportunity to meet girls. One thing singing did for me was to cure me of a stammer and opened the door to a whole new world of performance.

4. Everyone likes you & executives, laborers, men, women, grandparents, students, my daughters & have you ever considered a political career?

Thanks. That’s a very complimentary question. I think the best way to destroy any kind of broad-based bipartisan appeal is to get into politics. I’ve never been interested in the structure of politics as we know it today, but I am interested in why most people seem to not dislike me. I think it’s just being sincere and authentic. Politicians want to fit in while on the campaign trail but they rarely do.

5. I watched a rerun of “Dirty Jobs” recently where you were at a chicken farm in Arizona being authentic & cleaning up poop in a skid loader. Sometimes, do you wish you weren’t so authentic?

That was a fun trip actually, and kind of an important one. I’d been trying to get into Hickman’s Farms for years. The farmers really feel under siege by the media; they’re rarely portrayed fairly. But they thought I would give them a fair shake.

Read the complete article at hvacrbusiness.com