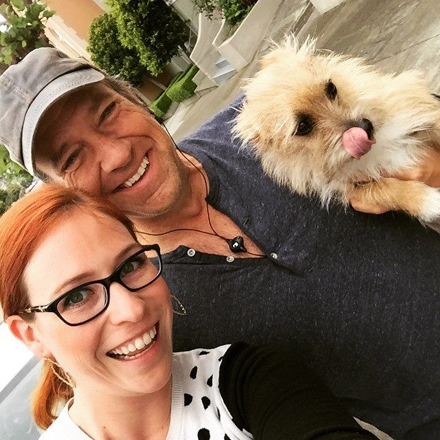 “It was such a pleasure to meet you and Freddy this morning! Thank you so much for taking the time to speak with me and take a photo. It really made my morning! As I mentioned, I work at CK Contemporary Art in Union Square. I would love have you stop by sometime! We have a great show right now featuring paintings by K. Henderson. She collects pieces of childhood memorabilia and paints them with the most fantastic realism. I have included a few images below with the picture of us as well. Again it was such a treat to meet you today! I am a huge fun of yours, and Freddie’s! Alissa Curtain, 5/22/15”

Hello Alissa. It was a pleasure meeting you as well. And judging from the way you leapt from your SUV after putting it up there on the sidewalk, I’ll assume you were indeed both pleased and excited to find us in the midst of our morning stroll to nowhere. I’m not sure how the encounter unfolded from your perspective, but here’s how it went down for me.

After searching longer than usual for the elusive odor that allows my sphincter to involuntarily spasm, I was beginning to wonder if I’d ever begin my long-awaited constitutional. I finally found the necessary scent on the outskirts of the gutter, mixed in with some pine needles and a Zagnut wrapper. I had barely completed my compulsory two and half spins before last nights dinner was halfway to the pavement, neatly transformed into a robust pair of perfectly formed, jumbo tootsie rolls. I was fast, but The Biped was faster. (Lately, my Human Butler has taken to snatching my turds from midair, before they actually hit the ground. He says it’s preferable to “scraping my shit off the street,” though I’m not sure that pulling my feces straight out of my anus and walking around with the prize in a periwinkle sack puts either one of us in the most elegant light. Whatever. It’s a small price to pay for getting to crap whenever the spirit moves you.)

Anyway, I had just pinched my last loaf directly into His Majesty’s bagged hand, when the squeal of your breaks snapped us both to attention. Though initially alarmed by your en

trance, I want to say that you handled the encounter with more grace than other females of your species have exhibited in similar circumstances. However, there’s something you should know about the photo you posted. Just behind your back, dangling from the Biped’s thumb and forefinger, is the aforementioned bag of dogshit.

You see, when the situation calls for it, The Biped can be both discreet and dexterous, and I have to say that I was impressed by the skillful way he managed to keep my excrement from ruining an otherwise splendid encounter. Trust me – had you come upon us just a few seconds earlier, the resulting photo would have not been suitable for framing.

Anyway, thanks for recognizing me. The cat downstairs watched the whole thing from the window and is still seething with jealousy. Which is as it should be. And good luck with your art thing.

PS. I like the rodent with the deformed hand, but the two-legged bat in black underpants is troubling.