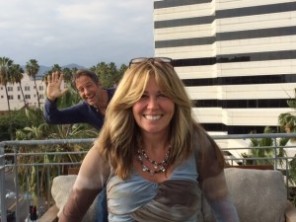 Mary Sullivan is older today than she’s ever been before. How old exactly? I’ll get to that in a second. First of all, allow me to make a proper introduction.

Mary Sullivan is the President of mikeroweWORKS. She started as a straight-A biochemistry major who wound up with a law degree and a career in corporate finance. Somehow she wound up in Hollywood, and by the time I wound up on her doorstep she was the managing partner of an entertainment law firm in Santa Monica. She would probably still be there, had she not had the poor judgment to answer her own phone ten years ago.

Prior to Dirty Jobs, I negotiated all my own deals. Partly because I’m cheap, partly because I’m foolish, but mostly because I never had to worry about longterm success. Back then, my business model depended upon my ability to get cast in projects so poorly conceived that no amount of luck or talent could possibly transform them into something successful. By attaching myself to these turds, and doing the best work I could, I was able to build a solid reputation without getting blamed for the projects inevitable demise. More importantly, I didn’t get tied down to some tiresome hit that would interrupt my early and sporadic retirement. So I never worried about all the fine print in my contracts that gave networks the option to do whatever they wanted in the event of a success. Then, a massive miscalculation. Dirty Jobs.

Discovery had ordered three, one-hour episodes of a show they didn’t really want, and there was no reason to expect they would order more. It was a “one-off” mini-series with a tiny budget that highlighted hard work at a time when no one else was producing anything similar. It was also considered wildly “off-brand,” and was, for all intents and purposes, doomed.

Imagine my surprise when a thousand letters arrived after the pilot premiered.

Imagine my further surprise when Discovery ordered an entire season shortly after that.

And imagine my apoplexy when they ordered another 39 episodes, right on the heels of that.

Overnight, I went from six months off a year, to 300 days on the road. Honestly, I didn’t mind the work so much, because I knew the show was worth doing and potentially important. But it was a major adjustment, and financially, I was stuck in a terrible deal with no end in sight. I needed someone to help me fix it. Mary Sullivan came highly recommended, so I called her one day during my lunch break. The conversation went like this:

Mary: Hello, this is Mary.

Mike: You answer your own phone?

Mike: I was told you were a high-profile Hollywood attorney. I figured you might have a receptionist.

Mary: She’s out to lunch. Who is this?

Mike: My name’s Mike. I host a TV show on the Discovery Channel called Dirty Jobs.

Mike: You will. It’s gonna be a big hit.

Mary: Well, congratulations in advance. What can I do for you?

Mike: I need a lawyer. How much do you charge?

Mary: Are you in a bathroom?

Mike: Of course not. I would never call you from a bathroom.

Mary: Where are you?

Mike: Perhaps. But trust me, you don’t want to take a bath in here.

Mary: What are you doing in a sewer?

Mike: Well, at the moment I’m eating a ham sandwich and talking to you. But for the rest of the day, I’m working as an apprentice for a guy who cleans grease traps and septic tanks.

Mike: I can eat anywhere. Look, my contract’s a mess and I need some help. Can we meet?

Mary: How did you get the job?

Mike: It’s a long story. Why don’t I fly to LA and tell you all about in person.

It took the better part of an hour, but Mary Sullivan eventually agreed to see me. I showed up a few weeks later, covered with dust from a nearby rock quarry. Mary was wearing something from Armani and looking a lot like Grace Kelley in a corner office. I was outclassed in every possible way, but she was very gracious and let me sit on her fancy sofa and tell her my tale of woe. Half way through, her assistant came in with a blue bag from Tiffany’s, dropped off by a famous and grateful movie star. Mary waved her away, and didn’t give the bag a second look. I was deeply, deeply impressed.

Maybe it was pity, or maybe she was amused by the fact that we grew up ten minutes apart back in Baltimore, but four hours later, Mary agreed to take me on as a client, and over the next few years, I went about the business of sucking up all of her time. As Dirty Jobs exploded, offers came in from all over. Speaking gigs, acting gigs, endorsement deals, you name it. She begged me to get an agent. I demurred. She insisted. I declined. She demanded. I acquiesced. Mary arranged meetings at every major firm in Hollywood. I took the meetings just to keep the peace, but I never signed on, for the simple reason that I never met anyone with the work ethic or the gumption that Mary had.

One time, we were in the conference room of the biggest agency in the world. It was filled with shiny people in shiny suits, and one of them fired up a power point and started to talk about “The Mike Rowe Brand.” It was a total “Entourage” moment. They had photoshopped an image of me with a plunger, and put me in the aisle of a Home Depot. I started to giggle and couldn’t stop. Damn near peed my pants.

Eventually, Mary gave up, and started impersonating an agent. Then a manager. Then a publicist. Then a director. She eventually left her firm to help me start mikeroweWORKS, and to this day, she proves me right every day, by being absolutely fantastic at whatever she attempts. Point is, I wouldn’t be here without her, so I’d be very grateful if you’d all wish my dear friend and partner a very Happy Birthday.

And if anyone can guess her age…

…I’ll sure as hell never admit it.