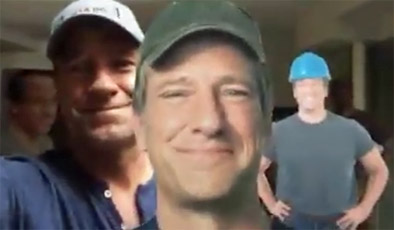 Apparently I was trending yesterday. I’m still not sure what this means, but it sounds like something I should be grateful for, so thanks. So weird, the way a couple of cocktails and a spontaneous response to a random guy can wind up on the front page of a dozen different websites. Lots of comments, including these from David DiSabatino.

“It seems like you want bipartisan support for mikeroweWORKS, but choose to thrash critics who happen to be liberal. Liberals want to support the foundation because of its mission!”

Hi David. I appreciate that. The mikeroweWORKS Foundation is completely non-partisan, and the last thing I want to do is discourage a liberal from writing a check! But honestly, I don’t think I’ve ever “thrashed” anyone for disagreeing with me politically, or holding a view that I don’t personally share. Sure, I’ll push back against dishonesty, bad manners, blatant mischaracterizations, and general stupidity, but I would never criticize a person based on their politics or religious beliefs. Had Jim Green called his book called, “WHY IT’S IMPOSSIBLE TO BE A HINDU AND VOTE DEMOCRATIC, I’d have responded in the exact same way.

“Personally, I’m not going to stop supporting your foundation just because you have “libertarianish” views or sometimes “vote like a Republican.” Nor will I stop supporting mikeroweWORKS just because Republicans and conservatives make you out to be their champion, because that’s not totally within your control.”

Thanks. But to be clear – it’s not that I don’t have “total” control over what happens after I hit post – I have ZERO control. I wrote a lighthearted piece entitled “Some Unsolicited Marketing Advice from Mike Rowe at 37,000 Feet.” I made no comment about the posters politics or his religion. To your point, others have. No less than a hundred blogs and a dozen websites have reprinted what I wrote. However, they also added an additional headline, deliberately designed to create a different reality. Here are just a few examples.

Mike Rowe Fires Back At Liberal Who Claims Christians Can’t Be Republicans The Inquisitr – Nov 24, 2014

Liberal Challenges Mike Rowe to Explain How a Christian (or Anyone) Could …TheBlaze.com – Nov 23, 2014

Like a boss! Mike Rowe takes on liberal’s challenge to explain how a Christian …BizPac Review – Nov 24, 2014

Consider the language. “Spars Over,” “Fires Back,” “Ridicules,” “Takes On,” “Totally Dismantles.” With the exception of Uproxx and The Blaze, every headline suggests a contentious back and forth that simply isn’t there.

“But what is in your control is who you choose to mock, and appearances matter when I try to tell other liberals that your foundation is a good thing they should support.”

I try not to mock. What I prefer to do, is highlight those people who say something so outrageous, so bigoted, or so self-righteous that no actual mocking is required. To your point, there is no shortage of either on both sides. But remember, people tend to find what they look for, and if your liberal friends look a little closer, I think they’ll see the situation is not as one-sided as you suggest.

Not long ago after an appearance on Bill Maher, I received over a thousand negative comments from self-described Republicans and Christians who expressed their “profound disappointment” with my decision to talk with a guy they believe to be Satan’s Helper. I responded to many of those posters, and called them out on what I felt was rank hypocrisy and blind partisanship.

In the last few months, I’ve received thousands of posts from conservatives who simply refuse (REFUSE!!!!) to watch Somebody’s Gotta Do It because it’s on “THE WRONG NETWORK!!” I’ve responded to many of those as well.

“Maybe – just a suggestion! – you could mock people who think anyone who doesn’t go to college is stupid? Plenty of those people around.”

Indeed. I challenge the people you describe every single day. I wrote a book about it.  I hosted a TV show about it. I have an entire website dedicated to it. I’ve testified before both houses of Congress on this very issue. I’m “on the record” in every conceivable way. I raise money by selling posters that say Work Smart AND Hard, along with a S.W.E.A.T. Pledge that clearly challenges the absurd belief that a four-year education is the best path for the most people.

Honestly David, I’m not sure how I could further engage the people you describe. If someone proclaims that a four-year degree is the best path for the most people, I’ll publicly challenge them to defend their position. And if I can, I’ll hoist them on their own petard.

Thanks for your support, sincerely.

PS. Regarding bi-partisan support, mikeroweWORKS is currently accepting money from Republicans, Democrats, Christians, Jews, Muslims, Rotarians, Freemasons, liberals, conservatives, convicts, ex-convicts, Presbyterians, Catholics, Libertarians, Pieces, FOX viewers, CNN viewers, capitalists, communists, socialists, anarchists, hippies, Black Panthers, and Italians. A check is always welcome, but in the spirit of the season, I recommend a modest transaction that affords you something beyond the warm glow of giving. Currently, you can buy hats and shirts and other stuff that benefits the foundation. We also just got some new “Stand Up Mikes,” which you can see in the attached video, along with an unintended tour of my new office, still woefully undecorated.

PPS Look for a very special C.R.A.P. on Black Friday. (Collectibles, Rare And Precious.) To date, this will be my largest CRAP on record.

PPPS. Regarding SGDI – Some of you have asked about a marathon scheduled for tomorrow or tonight. I saw the promo too, but frankly, I wouldn’t count on it, what with all the riot and civil unrest. A new episode is slated for next Wednesday at nine, pending the end of the world. Hope to see you then.