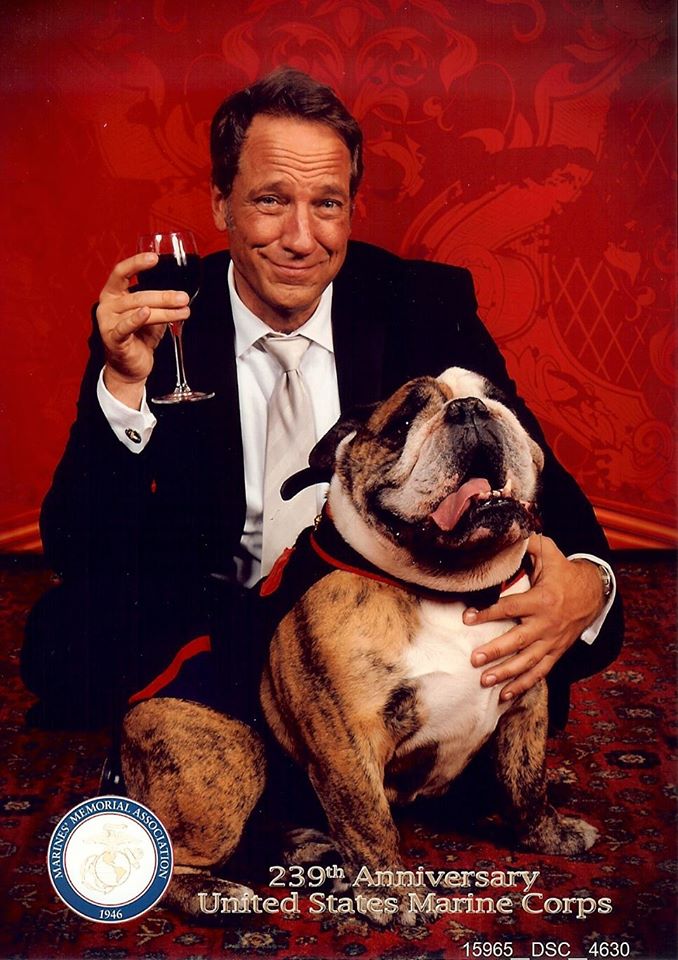 The Marines are celebrating their 239th birthday tomorrow. I celebrated the occasion last night at The Marines Theater here in San Francisco. Last year, I wore a black tie. This year, I wore a silver one. Aside from that, things were pretty much the same. Good friends, lots of Champagne, a big bulldog, dancing, stories, cake, and lots of photos. If you know a Marine, thank them for their service, and wish him or her well. Trust me, they appreciate it.
Happy Birthday Marines, and Semper Fidelis.
PS. I wrote the following last year. Because the night was was virtually identical, and because many of you are new here, (and because I’m lazy), I’m posting it again.
—
11/10/13
The old theater looks like the one in Young Frankenstein – the one where Gene Wilder and Peter Boyle sing “Putting on the Ritz.” Every seat is taken, and the air is filled with a weird mix of   anticipation and familiarity. And maybe a faint hint of mothballs. 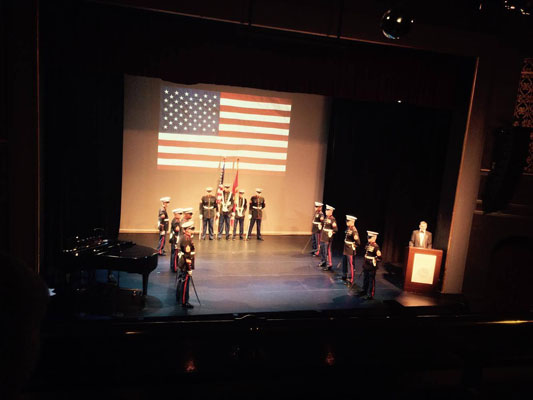 I’m in the mezzanine this year, sipping champagne and jammed into a tuxedo that’s undeniably smaller than it was last November. Behind me, a retired general is singing The Star Spangled Banner, along with the rest of the crowd. He is singing louder than I am, and I’m singing as loud as I can. And that’s saying something.
The anthem ends, and we take our seats. The champagne is cold in my hand, and as I look around I see that I’m not the only one to have liberated a flute from the lobby bar. I take a sip, and observe the scene onstage. Like last year, and the year before that one, and the five years before that one, I’m transfixed by what I see.

Ten Marines in full ceremonial dress march out from the wings to the sound of trumpets and drums. They move like a synchronized machine, forming two parallel lines perpendicular to the audience. They stand 10 feet apart, staring straight ahead like statues in a deadly gauntlet. They don’t blink; they don’t smile. They just stand there looking dangerous as hell. Then, a command is barked out. Ten swords are drawn as one, catching the light on their blades and sending it flashing through the audience like a thousand lasers. If Dr. Frankenstein’s infamous creature were i 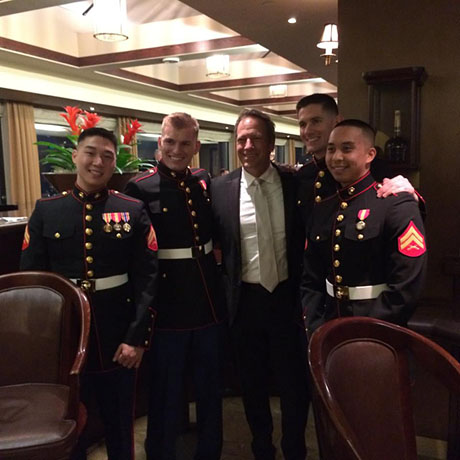 n the vicinity, I suspect he’d crap his pants.

Upstage, the Color Guard enters, connecting the two lines at the top. They face the crowd directly – The Color Sargent and The Color Bearer, flanked by two riflemen. Under the hot lights, the Stars and Stripes are radiant, and the Marine Battle Standard glows like a crimson beacon. They’ve been standing there for the last half-hour, frozen in time, as the events of the evening unfold. Sometimes, that’s the job. To stand a post. To wait. To watch, as events unfold around you.

The United States Marine Corps is 238 years old today, and last night, I helped them celebrate in San Francisco the same way I do every year. I attended their annual ball, ate a piece of their birthday cake, and assisted them with the important work of closing down the bar.

In between, there was dinner and dancing and all the stuff you might expect to find at a formal ball. There were speeches and toasts. There were songs. And there were tributes of courage and sacrifice so unimaginable, you can only shake your head and marvel at the character of some. I met the oldest Marine present – 95 – and drank a beer with the youngest – 21. I swapped some jokes with a Lance Corporal that I can’t repeat. (To anyone.) And I chatted with some Gold Star parents, who spoke proudly and movingly about the sons and daughters they lost.

For me, the whole affair is just so damn humbling. A kid with two purple hearts and three tours of combat comes up to me and says, “Holy cow, Mike, how did you ever do all those Dirty Jobs? What was the worst one?” A sniper with stories that would haunt your dreams listens wide-eyed as I answer his questions about crab fishing on the Bering Sea. And a combat medic who has saved more lives than he can remember wants to talk to me about his F-150. 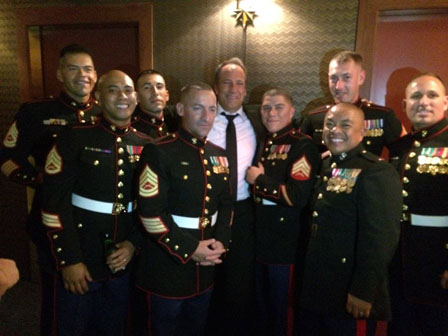 It’s the same thing every year, and every year I’m surprised all over again. These Marines seem completely unimpressed with their own acts of valor. Their modesty and their courage seem to exist in parts both enormous and equal. They’d rather talk about other things. About sports. About movies. About the world in general. About the things they fight for. Anything but themselves. Which of course, makes them all the more magnificent.

Really – what can you say about people like that?

For now, I’ll go with Happy Birthday. Maybe next year I’ll come up with something more insightful. Semper Fi, Marines, and thanks.
And of course, a very Happy Veterans Day, to all who serve.