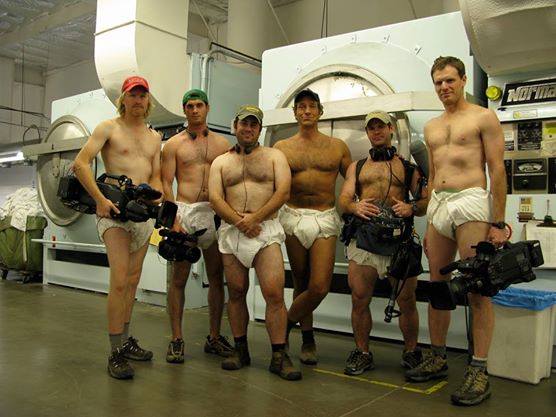 Gary E. Smith writes,
“So, being a big fan of Dirty Jobs, I have to ask…is Barsky going to be working with you on SGDI? Doug?? Troy?!?”

The boys are all doing well, and happily, I was able to coax a few of them back into indentured servitude. Troy Paff, far left, (wearing a diaper,) is back with a brand new camera and doing yeoman’s work. Doug Glover, far right, (also wearing a diaper,) is likewise back on the case, and spreading his unique brand of cinematic joy wherever we go. Chris Jones, next to Doug, (seen here wearing a diaper,) has made a triumphant return to monitor all things audio, and remains thirstier and crankier than ever.

As for Barsky, seen to my immediate right (and wearing what appears to be a diaper,) I’m afraid he was unable to join me for this one. He’s supervising “Bizarre Foods with Andrew Zimmerman.” Though completely incontinent, he and the rest of the gang are all making the rent. I hope one day our paths will cross again.

You’ll see several new faces on SGDI, because the crew – as always – is part of the journey. Along with Troy, Doug, and Jones, you’ll meet Taylor, Nick, Dan, Garza, Dawson, Steve, Alex and Ryan. They’re all great at what they do, and they all love doing it. Though for reasons I don’t understand, they refuse to pose for any photos with me…

“Hey Mike
When might the world expect to see a new season of Dirty Jobs? We need this show, bud.”
-Dustin Hubbard

Hi Dustin
I’m flattered. But I’m also sorry to tell you that Dirty Jobs was canceled over two years ago. There will be no new episodes.

If this comes as a surprise, you’re not alone. Even though it was canceled, Dirty Jobs never really went away. In fact, it seems to have grown in popularity over the last year. The show airs in constant reruns, and a whole new generation is finding it on Netflix. The problem, is that every episode still includes an invitation to send in suggestions for more dirty jobs. Consequently, thousands of people – many right here on my own Facebook page – are under the impression that Dirty Jobs is either still in production, or about to resume under a new title. Neither is true, but the confusion is making me nervous about what Dirty Jobs fans might be expecting from Somebody’s Gotta Do It. Consider the next three questions…

“For your new show – how about profiling Crime Scene Cleaners? That would be awesome!”
– Frank Willard

“Can’t wait to see you back on the air! Have you ever worked as a copper miner? That’s about as dirty as it gets.”
-Tom Balaban

“I’d like to see you spend the day as a zoo-keeper. Think of all the different types of poo you could clean up in one day!”
-Chuck Stiles

These are all fine suggestions. Thank you. Unfortunately, I’ve already done them. Moreover, I’m no longer looking for jobs that are dirty or dangerous. Your suggestions however – aside from making me nostalgic – make me worry that people might be expecting Somebody’s Gotta Do It to be just like Dirty Jobs. It’s not, and in the interest of managing expectations, I’m feeling as though I need to do a better job of explaining what Somebody’s Gotta Do It is all about, and why I can no longer focus on feces from every species.

First of all, it’s really important for the fans of Dirty Jobs to understand that I don’t own the show. Yes, it was my idea, but the show belongs to Discovery. If I start doing more Dirty Jobs on another network I’ll be sued before the first commercial ends. I can still be “me,” (for what that’s worth,) but I can’t just change the name of Dirty Jobs to Somebody’s Gotta Do It and move the whole operation to CNN. So please note – whereas Dirty Jobs was fundamentally focused on people who do jobs that are dirty, SGDI is focused on people who are driven by a much larger variety of passions. In other words, I am no longer allowed to dive head-first into a river of shit, but I am free to embark upon a completely unscripted romp across our great country, and introduce you to some people who I believe are worth meeting. That’s precisely what my new show is. It is NOT a continuation of Dirty Jobs. In fact, SGDI actually proceeded Dirty Jobs. This too, is important for the friends of this page to understand.

Once upon a time, back when I was paid to impersonate a TV Host, I worked for CBS on a local show called Evening Magazine. The program aired in San Francisco and boasted several dozen loyal viewers, some of whom could actually fog a mirror. In an effort to reinvigorate the key demo, I began to search for human beings that struck me as either profoundly interesting or deeply demented. I focused on collectors, do-gooders, inventors, dirty jobbers, entrepreneurs, hobbyists…anyone who was passionate about their job or their hobby. I would then hang out with these individuals in their home or place of business, and tried to determine what made them tick. I called the segment Somebody’s Gotta Do It, and people loved it.

Ten years ago, I pitched Somebody’s Gotta Do It to Discovery. Same title, same format. What they wanted, was just one aspect of the show – the dirty part. Long story short, we changed the name to Dirty Jobs, and the rest is filthy history. But along the way, I met a lot of really great people who I couldn’t feature on the show because they “weren’t dirty enough.” SGDI is really about those people.

My point is this – I appreciate all the dirty suggestions, but I simply can’t host Dirty Jobs Part 2. What I can do, is go back to where it all began, and focus less on the dirt, and more on the people who still fascinate me. That’s what Somebody’s Gotta Do It is really all about, and that’s the show I’ve been working on.

Feel free to spread the word. And have a great weekend.
Thanks
Mike

PS. So far, the suggestions we’ve gathered on Facebook have not only been helpful – they’ve been home-runs. For all intents and purposes, you guys are programming the show, and doing a better job than I could. In a few weeks, I’m headed to Louisville, KY. If you know anyone in that zip code whose gotta do it, leave your suggestion right here – not on the wall. I can’t keep up!