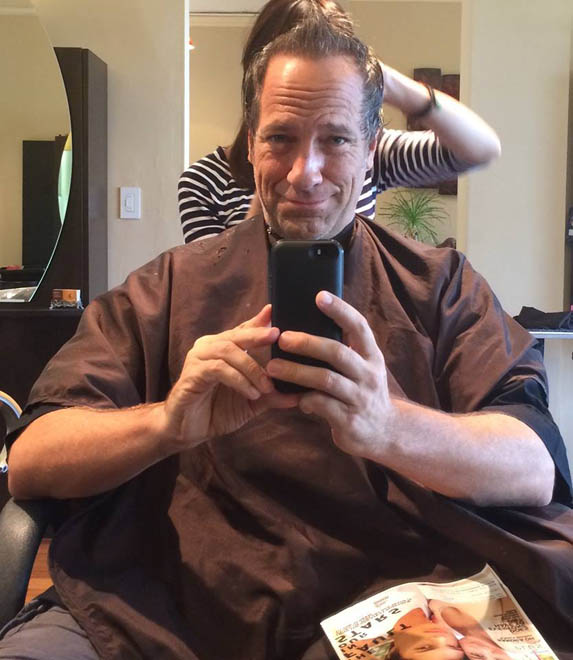 That’s Christine, hiding behind my head with a razor, removing a few rogue hairs from the back of my neck. Christine isn’t really shy, she’s just focused on the task at hand. Which I appreciate.

When Christine cuts my hair, she looks like a scientist peering through a microscope at some new life form. She cuts each strand individually, and pauses to examine her work after every clip. She has no idea I’m posting my thoughts on Facebook while she snips away. I hope she won’t mind.

Earlier, Christine washed my hair with an herbal shampoo and some sort of enhanced conditioner. It smelled like lavender and jasmine. Then she rubbed my head and my neck for about 5 minutes. This is one of the high points of living on Planet Earth. She does something with her knuckles that makes my eyes cross. If it weren’t considered rude, I’d forego the haircut for a half-hour of neck and temple rubbing.

Christine is very busy, but she always makes room for me, even when I call her at the last minute. Her kids are big fans of Dirty Jobs, and I think she’s quietly pleased to cut the hair of a B-list celebrity. Unfortunately, no one ever sees me without a hat. That has to be a source of disappointment, but Christine never complains. Deep down though, I suspect she wishes I was Anderson Cooper.

Christine’s salon is on Union Street in Francisco. It’s called Berenice. Berenice is the title of a horror story by Edgar Allan Poe, which I doubt was the intended association. Berenice is also an ancient Greek name that means “to bring victory.” Seems a bit grand for a haircut, but victory is always better than defeat, so I guess a victorious haircut is preferable to one that says, “Behold, I am vanquished.” Personally, I don’t know why she doesn’t call it “Christine’s,” but I hate to distract her when she’s armed with a razor.

When I’m in Baltimore, I get my hair cut by a guy named Frank. Frank charges $8 for the experience. No shampoo. No conditioner. No neck rub. For an extra $2 though, he’ll throw in a shave. Frank keeps old copies of Playboy and Esquire laying around his office, and plays music from 1941 on an old phonograph. The place smells of Vitalis and Brut.

Frank was 82 when I met him ten years ago, and a little shaky with the scissors. In fact, he almost cut my ear off once. He has since gotten worse. But like most of his clients, I go back for the stories. Frank flew a B-29 in WWII, and got shot down over Germany. He escaped from a POW camp with help from the French Resistance. He has seen and done many important things.

In a few moments, Christine will escort me back to the shampoo area for a “final rinse.” Sometimes, there is a bonus neck rub. Sometimes not. Life is unpredictable, and full of surprises.

But either way, when they finish with me, I still put the hat on…