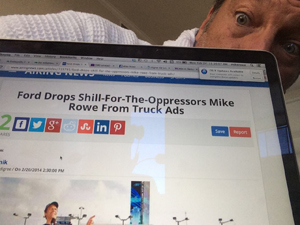 I’m back. Three days of press, five hours of sleep, four bottles of wine, a speech, a job offer, 5,000 form letters, and a couple of good-natured death threats. All because of a commercial that I narrated about American manufacturing paid for by Walmart. Press tours are fun!

Oscar Wilde said, “the only thing worse than people talking about you is people not talking about you.” I don’t know that I agree with Oscar, but one thing’s for sure – there’s no such thing as “free press.” I just Googled myself and the results are too rich to ignore. Let’s start with this journalistic masterpiece from Matt Hardigree. Ford Drops Shill-For-The Oppressors Mike Rowe From Truck Ads

“Shill for the Oppressors!” Is that not fantastic? I should make new business cards. I’m sure Matt’s a swell guy, but unfortunately, he’s so eager to report on a story that doesn’t exist he’s resorted to a career in fiction. Matt believes that my recent work with Walmart drove The Ford Motor Company to fire me after seven years of service. He sees some sort of conspiracy at work in a recent Ad Age article, where according to him, every one played just “a little too nice.”

Sorry Matt – here are the facts. Ford didn’t “drop” me. We had serious discussions about another extension but decided not to proceed for reasons completely benign. We parted amicably long before the Walmart ad came along. A simple phone call to Ford would have confirmed that. Or, you could have done some really deep digging, and called me. People do it all the time, especially when they’re interested in getting the facts.

Bottom line – We “played nice” in Ad Age because the people involved are all, well…nice. I’m just at a point in my career where I want to associate myself with messages that speak directly to the issues that are important to me. That’s why the Walmart ad was so appealing. A $250 billion investment in US manufacturing is worth talking about, and very much in keeping with the goals of my own Foundation. If any other “Oppressors” are looking to make a similar investment in America, drop me a line. I’m happy to “shill” for any company that get this country back to work.

Also in Matt’s piece, was a link to this little gem –  How Mike Rowe became a lightning rod for Walmart

This piece comes from CBS News. Check out the photo. It’s a rare image of me in a suit a tie, and conveys all the sincerity of an ambitious vacuum cleaner salesman at the annual

Hoover convention. Nice. Below the photo, the writer – Aimee Picchi – attributes the following question to me. “Who gives a crap about your feelings toward Walmart?” Unfortunately, Aimee leaves out the most important part, which for the record was this: “For that matter, who gives a crap about MY feelings? Isn’t the business of making things in America an initiative we can all get behind?”

Along with that omission, and the clever use of words like “hawk,” “tout,” and “spokesman,” the reader is left to believe that I’ve been empowered to speak on Walmart’s behalf in some sort of official capacity. In fact, I have not. I’m doing this because I want to encourage other companies to make similar investments in American manufacturing. That’s it.

Of course, I’m not the only one with an agenda, and Aimee knows it. Ori Korin is a spokesperson for “Jobs with Justice,” and she’s trying very hard to persuade people that Walmart is treating its workers unfairly. Aimee quotes Ori as being disappointed with my decision to work with “a company as notorious as Walmart.” Ori also believes I was “too quick to dismiss” the workers she represents.

Of course, I was already well-aware of Ori’s disappointment with me. To date, Jobs with Justice has carpet-bombed my office with 5,048 form letters, imploring me to sit down with “real Walmart employees” and listen to stories about how unfairly they have been treated. Naturally, Aimee points this out to her readers, and even provides a helpful link to the Jobs with Justice Letter Writing Campaign, so that other objective citizens might continue to overwhelm my modest staff with additional expressions of carbon-copied concern. (Thanks Aimee!)

My response to all this? According to Aimee –

Well Aimee, please allow me to address your request with all due speed. My office has no record of a call from you or anyone at CBS. I’ve checked three times. Nothing. Of course, if you sent an email to my Foundation, it may very well be buried in the mountain of form letters currently straining the resources of mikeroweWORKS. Which brings me to Ori Korin, and Jobs for Justice. In the spirit of their chosen method of communication, I’ll respond directly and openly.

You’ll be pleased to know that my office has received your letter, and 5,048 others just like it. While I’m sympathetic to your objectives and sensitive to the needs of your members, I must say that your tactics have had the same effect as a flood of telemarketing calls during my dinner, or a bag of dog crap set ablaze on my front porch. Now, instead of overseeing scholarship applications and other Foundation matters, my already beleaguered staff must sift through a sea of robo-letters in search of legitimate correspondence from hard-hitting investigative journalists like Matt & Aimee.

don’t you think? On the one hand, Jobs with Justice is concerned that everyday people are being overwhelmed by heavy workloads. But you don’t think twice about flooding an unsuspecting non-profit foundation with and endless stream of form letters. Anyway, my answer to you is the same as it was after I got your first letter a week ago. You guys are in a labor dispute, and my Foundation doesn’t take sides between employers and employees. Another 5,000 form letters won’t change my position on that – though it just might inspire the nice woman who oversees my Foundation to throw herself out the window. (Her name is Mary, by the way, and her demise is now on you.)

Let me really spell this out though, so there’s no confusion at all. I care about the people you represent. That’s precisely why I set up a foundation and a scholarship fund. I’m trying to encourage hardworking people who are unhappy in their jobs to make a meaningful change in their life. A lasting change. And I believe this change is most likely to occur when people are willing to learn a skill that’s in demand. Happily, worthwhile opportunities are everywhere. Our country has a massive skills gap, and the chance to retool and retrain has never been better.

We’re not enemies, Ori. We’re just fighting different battles. You’re trying to wring out a modest increase for people who feel unappreciated by their employer and unhappy in their work. I’m trying to get those same people excited about possibilities and opportunities that go beyond their current positions. Frankly – and I say this with all due respect – I don’t believe that your strategy is in the long-term interest of your members, or for that matter, anyone who wants to improve their lives in a meaningful way.

Think about it, Ori. Many of the workers you represent have jobs that could very well become obsolete in just a few years. Automation, technology, automatic checkouts…the writing is on the wall. But the skilled trades are different. Welders, auto technicians, carpenters, masons, construction workers, healthcare…these opportunities are real, and the rewards go far beyond the minimum wage – whatever that might turn out to be. Walmart may have cornered the market on retail jobs, but the world’s a lot bigger than Walmart.

Anyway, I want to help. Please forward your members this link – the mikeroweWORKS Foundation Scholarship Opportunities

Finally, I found a piece that literally drips with sanity and common sense – In Defense of Mike Rowe: Stop Saying He Represents Wal-Mart

This comes from a guy named Shawn Griffiths over at The Independent Voter Network, and I appreciate every single sentence. My own bias aside, Shawn’s analysis is completely correct, and if I were King of the World, this would be required reading for any journalist that wanted to discuss recent events. If you’ve come this far, please give it a look.

PS If you’re late to the party or just a glutton for detail, my office has set up a press page with some photos and links to some of the recent appearances.