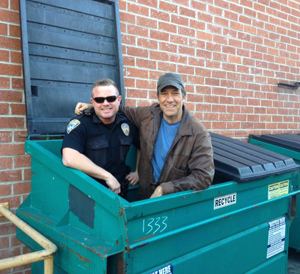 Couple years ago, I was invited to host the annual Medal of Valor ceremony in Los Angeles. There, 21 of LA’s finest were awarded the highest accommodation a police officer can receive. My job that day was to read the details of 21 meritorious acts into the public record, and recognize those that fell in the line of duty. Very humbling, and quite an honor.

Of course, my encounters with law enforcement have varied over the years. Most recently, I found myself in a dumpster, attempting to film a non-traditional PSA for an association of Trade Schools I’m trying to organize. (It’s complicated.) Anyway, I was halfway through my spiel when a cruiser came barreling down the alley – lights flashing, siren chirping. Two cops leapt from the black and white, all business. Hands on their holsters, they moved quickly passed my baffled cameraman, and surrounded the dumpster.

“Hands where we can see them, sir. NOW!”

“Put that camera down. NOW.”

My cameraman also complied, and quietly crapped his pants.

Then the yelling really got started. First one cop, then the other.

“Sir! WHAT are you doing in city property?
“Sir! WHY are you trespassing?”
“Sir! WHERE is your permit to film in this location?”
“Sir! WHO do you think you are?”

I attempted to answer all four queries simultaneously, but succeeded only in babbling for the next ten seconds. Then the cops burst out laughing.

“You should see your face,” said the one closest to me. “You look like you did that time when the ostrich tried to kick your head off.”

The second one chimed in. “Or that time on the bosun’s chair, washing windows in Hawaii. Remember that one?”

After a few minutes of hilarity and Dirty Jobs reminiscing, the first one asked for a picture. I said sure. But only if he joined me in the garbage.

I’m not sure if cops are supposed to be posing in the rubbish with B-list celebrities. But, either way, it’s nice to know that – along with protecting and serving – the boys in blue are keeping a sharp eye on the dumpsters of Los Angeles…