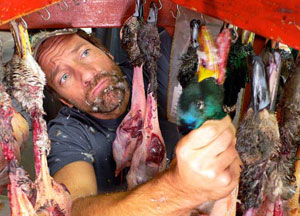 So I was walking around the streets of San Francisco this morning, enjoying a cup of organically roasted, free-trade coffee from an independent, minority-owned establishment run by some immigrants whose legal status is completely irrelevant, when an elderly woman asked me out of the blue how Phil Robertson was holding up with all the drama around Duck Dynasty.

Like my grandmother, this woman was under the impression that everyone on her television lived together on a private island. Me, Phil Robertson, Jerry Seinfeld, Wolf Blitzer, Charlie Sheen, The Golden Girls…we’re all just sitting around somewhere nice, chewing the fat. Probably in a bar called Cheers.

“You too. And say hi to those fellas from the Mythbusters, too!”

A block later, a bunch of college kids let me know that while Phil is a “redneck of the first order,” his analysis on the benefits of lady parts vs. gentlemen parts was nevertheless “right on the money.” Having no experience with the latter, (and no issue with those that do,) I concurred that the former was indeed a point of personal interest. Then one of the students – an engineering major I presume – asked my opinion on the logic of “running a sewer line through a playground.”

Because I reject all vaguely sexist comments (especially the funny ones) I left them to discuss the nuances of urban planning and intelligent design without me, and continued my journey to Crunch Fitness, where I was bound to arrive, sooner or later. Turned out it would be later. Because right in front of The Pottery Barn I ran into my old friend Theo. Theo is gay with a capital G, and owns (I swear) a very successful hair salon I used to frequent before his prices became intolerable. He’s also black, though as far as I know, the only color he really cares about is green.

“So how much money we talking about here, Mike? Millions? Hundreds of millions? What’s the deal?”

“I don’t really know, I said. “It’s a big audience. Merchandising alone is probably worth a billion.”

“Damn. I bet your your buddies at A&E are breathing a little easier today,” he said.

“I bet you’re right,” I said. “How about your buddies at GLAAD? And Reverend Jackson? How are they taking it?” (As you probably know, Theo lives on a private island with all the other gay hairdressers and controversial black leaders.)

“Yeah? You think Phil did them a favor?”

“You know it. How many people you think are hearing about LBGT for the first time? And what would Jesse be bitching about if it weren’t for Phil Robeson?”

Theo smiled and winked, confirming his sense of irony, as well as an understanding of black history and musical theater. We talked some more about free speech, the strange appeal of facial hair, and the hot mess of non-fiction television in the Age of Honey Boo-Boo. We also discussed at length the “right to not be offended,” which we both agreed was a relatively new expectation sweeping the land, and probably good for no one. Theo told me I needed a haircut, and I told him that I’d been cutting it myself. He said that was obvious, and wished me a Happy New Year. I finally made it to the gym. But I didn’t escape Phil.

On the treadmill, I turned the TV to CNN and saw Phil Robertson’s beard fill the screen as someone from the NAACP discussed A&E’s “stunning reversal,” and the “uncertain consequences of living in such culturally divided times.” Over on FOX, and a man from the FDC, (Faith Driven Consumers) was vowing to fight for “true and comprehensive tolerance,” while on MSNBC, a representative of GLAAD resolved to “confront every broadcaster who insists on spreading the gospel of bigotry.” The Angry Acronyms were out in force, so I clicked over to The Weather Channel, where I learned a storm was coming. No kidding.

Last month, on an interview with ReasonTV, I recalled my own encounters with The AAAA (The American Army of Angry Acronyms.)

My files include three letters from PETA, four from OSHA, two from the HSUS, two from the EPA, one from the MSHA, one from NOW, one from Greenpeace, and one from the AFL-CIO. To my knowledge, Dirty Jobs has never run afoul of the ACLU, (thank God,) or GLAAD. In fact, I was voted the #1 ‘Gay Fantasy Guy’ back in 2008, which was quite an honor.

(On the other hand, I’ve been cautioned that my support of the BSA would be problematic PDQ, if their policy on gay rights failed to evolve ASAP. So…we’ll see.)

The only time I saw the potential for real trouble though, was time a member of The AAAA called for a personal boycott of me and my partners.

Long story short, I had done a campaign for Kimberly Clark a few years ago around a line of disposable shop towels. After verifying all kinds of scientific testing, KC had proven that freshly laundered shop towels – those red cotton rags in every single garage and factory on earth – were coming back from the laundry with dangerous amounts of toxic heavy metals, and posing a serious risk to the workers who used them. The TRSA objected to the claims made by KC, but focused their anger on the messenger. They issued a national press release and called for an immediate boycott of All Things Mike Rowe, including Discovery, Dirty Jobs, Ford, Lee Jeans, Viva paper towels, Master Lock, Caterpillar, and mikeroweWORKS. I had no choice but to fight back, and my response to their attack is here. Some of you might find it amusing.

Happily, the TRSA backed down, and nobody fired me. But I learned a valuable lesson. Unless you’re a celebrity who refuses to comment on anything – ever – it’s only a matter of time till you offend a member of The American Army of Angry Acronyms. Because unlike regular citizens with working remote controls, The AAAA do not deal with “offensive material” by simply turning the channel. Instead, they turn up the volume. Real loud. Consequently, things are very noisy right now, and I guess I’m part of the racket. After all, I’ve got my own acronym, and without making some noise of my own, who would know about MRW and what we’re trying to accomplish with the skilled trades?

Back on CNN, a law professor from Georgetown was explaining that this whole business with Phil had absolutely nothing to do with free speech or personal liberty or constitutional rights or anything that was actually said. He said it was merely a dispute between an employee and his employer. I agree. But as I goosed the treadmill up to eight miles an hour, (getting me nowhere even faster,) I had to wonder – who exactly is Phil Robertson’s employer? Is it really a big cable company? Sure, A&E pays him. And yeah – they could certainly stop paying him. But are they really his boss?

This Christmas, I think Americans received a very useful gift from Phil, A&E, GLAAD, The FDC, and Jesse Jackson. A reminder of sorts, that the people on your favorite television shows don’t really work for the network. Or for the advertisers. Or for The American Army of Angry Acronyms. They work for you. They always have. Or in Phil’s case, Jesus.

Either way – the real boss has a mighty big office. And that remote in your hands is a pretty big stick.

PS. I just hung up with my mother. She too, was curious about my thoughts on all the duck drama, and had a question of her own.

“Michael,” she said, “why wouldn’t a guy like Phil just hire his own production company and do a web series called Fowl-Weather Friends?”

“Well, if birds of a feather really do flock together, people would watch, right?”

I told her she was probably right.
Assuming of course it was A-OK with the FCC…