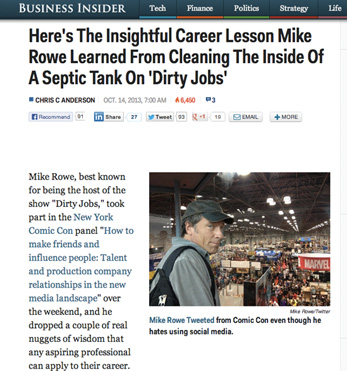 Here’s an article that suggests I “hate” using social media. This is simply not true. I think social media is swell, and can’t for the life of me understand how anyone could conclude otherwise.

Now, it’s true – I may have said a few things at Comic-Con International that could be interpreted as … ambivalent. For instance, I might have suggested that the overwhelming amount of information shared via social media is “irrelevant to the vast majority of humans and completely unreliable in terms of verifiable fact.”

I might have also intoned that “most Facebook postings go unread by legions of fake friends who are nevertheless compelled to respond in some kind of Pavlovian reflex that affords us all the rare opportunity to ignore each other equally.”

I may have then muttered something about the “democratization of banality,” and pointed out that most people in most audiences – including the one I was addressing in New York – now observe the world around them on the screen of “some shiny little monument to planned obsolescence, instead of watching real people do real things in real time.”

But do these gentle musings make me a “hater” of social media? A Luddite? Perhaps. A contrarian? Probably. But a hater?

The truth is, I went out of my way at Comic Con to credit social media with the success of Dirty Jobs with Mike Rowe. I talked at length about the unique engagement that allowed the fans to actually program my show.

I spoke about how social media allowed me to launch mikeroweWORKS and raise hundreds of thousands of dollars for trade school scholarships. Somehow, those comments didn’t make it into the piece.

So they will live here instead, forever preserved in the warm embrace of my personal Facebook page, a living testament to my unconditional love for all things social.

Which reminds me – I’ve been derelict in expressing my gratitude to the purchasers of my most recent C.R.A.P. Debra bid $1,825 for the Mackinac lamp cover. Awesome. YourHelpDesk LLC coughed up $767.99 for my Declaration of Independence replica, and Anonymous just forked over $610 for my impressionistic watercolor by two gifted penguins. Thanks to one and all.

Also, hundreds of you have contributed a buck (or more) as a result of the podcast about my TED Talk. And some of you have signed up to give automatically every month, which humbles me to no end. Andrew Nelson, for instance, has committed $50 a month indefinitely — and signed up with his employer’s matching-gifts program, doubling that amount — which makes me downright weepy with gratitude. Thanks again – very much.

Yours in social media love,
Mike